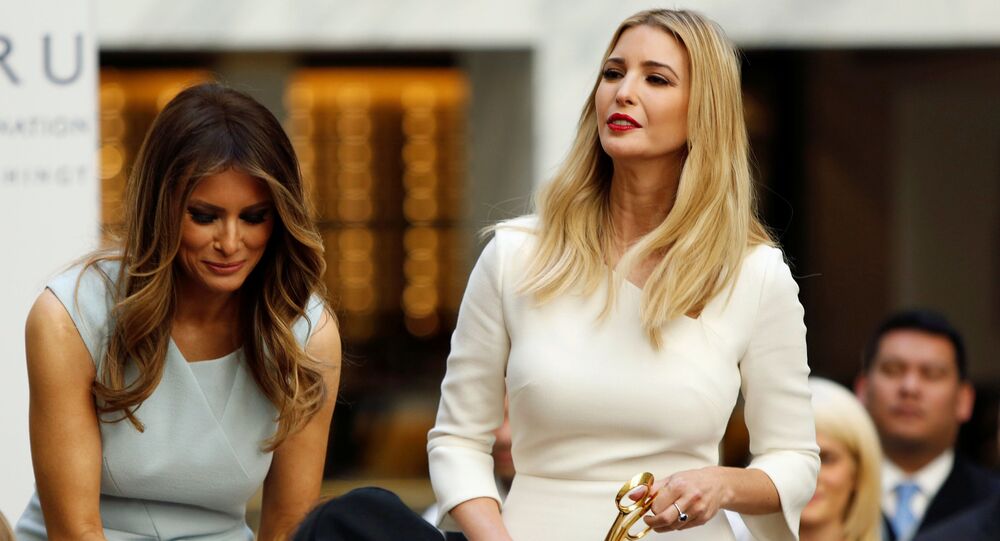 Stephanie Winston Wolkoff, who was an adviser to First Lady Melania around the time of President Trump's inauguration, first suggested  FLOTUS and her stepdaughter were at loggerheads over their potential leverage at the White House in her memoir, released in September.

Melania Trump believes her stepdaughter Ivanka will do "what it takes to get what she wants", including "poaching" staff tapped to work for her in the East Wing, Melania's one-time confidante Stephanie Winston Wolkoff shared with The New Abnormal podcast hosted by Rick Wilson and Molly Jong-Fast of The Daily Beast.

"So [Ivanka] impinged on Melania's duties while overstepping her rank and boundaries. And I mean that in a sense like she poached individuals that were for the East Wing, that we were vetting to have—Kayleigh McEnany, Mercedes Schlapp. I mean, these were people Melania was looking to bring in. We called [Ivanka] the serial poacher. It was deceptive", Wolkoff said, arguing Trump's eldest daughter was striving to make her stepmother "irrelevant" in Trump's orbit.

The aforementioned Mercedes Schlapp notably served as White House communications director from 2017 to 2019, while Kayleigh McEnany has been White House press secretary since April 2020.

Wolkoff, purported to be a one-time unpaid informal aide to Melania, went on to assert that the two most important women in Donald Trump's life definitively "loathe one another".

Melania "genuinely thinks and believes" the Javanka couple are nothing more than "snakes" and it is "galling" that they were granted their senior positions despite being "no more qualified to be engaged in any governing of the country than she was", said Wolkoff, who first claimed that there were severe tensions between Melania and Ivanka, just 11 years younger than her stepmother, in her recently published book, "Melania & Me: The Rise and Fall of My Friendship with the First Lady".

She further recalled an incident from late January 2017, days after Trump took office.

One of his first major initiatives, pertaining to his campaign pledges, was to issue an executive order banning entry to illegal immigrants from seven Muslim-majority countries, which quickly landed in his critics' crosshairs.

Around that time, on 29 January, Ivanka, who hadn't yet been tapped for her senior White House advisory role, reportedly moved to host a screening of the movie "Finding Dory", which tells the story of a fish with short-time memory loss travelling a long way to reunite with her parents.

Wolkoff claimed the episode was a result of Ivanka's "tone deafness", suggesting the plot repeats the real stories of families allegedly separated at the border, which has since become a focal point of Democrats' immigration policies and their attacks on the GOP president.

"I think that Ivanka is Donald in a suit, right? All of the Trumps are taught to be Trumps. They don't show emotion. A Trump is a Trump because they are authentically and unapologetically skin deep, and also self-serving", Wolkoff went on fuming.

"Their attitudes and disrespect for each other is, again, you have to get inside to see it", Melania's ex-associate proceeded to say.

The woman was ousted in February 2018 after the Trumps accused her of financial impropriety concerning spending for the January 2017 inauguration celebration. Yet, Wolkoff has long insisted that she wasn't fired, but simply "thrown under the bus".

As part of an ongoing lawsuit over the alleged misuse of more than $1 million in inaugural funds in 2017, attorneys have now subpoenaed records from Ivanka Trump, First Lady Melania Trump, Thomas Barrack Jr., a close friend of the president who chaired the inaugural committee, and others.

Ivanka Trump recently sat for a five-hour deposition as part of the lawsuit, speaking as a witness in the proceedings.

The case entered the spotlight in January, as the Trump Organisation and Presidential Inaugural Committee were sued for "grossly overpaying" the president's hotel in Washington as it provided its event space for Trump's inauguration, and thereby benefiting the Trump family.

In a purported vindication for Wolkoff, the filings say she had raised the alarm about the costs with both Trump and Ivanka, who after the grilling called the "inquiry" another "politically motivated demonstration of vindictiveness & waste of taxpayer dollars".

Alongside the fiery comment, she attached a December 2016 email whereby she called on the hotel management to draw an invoice at "a fair market rate".