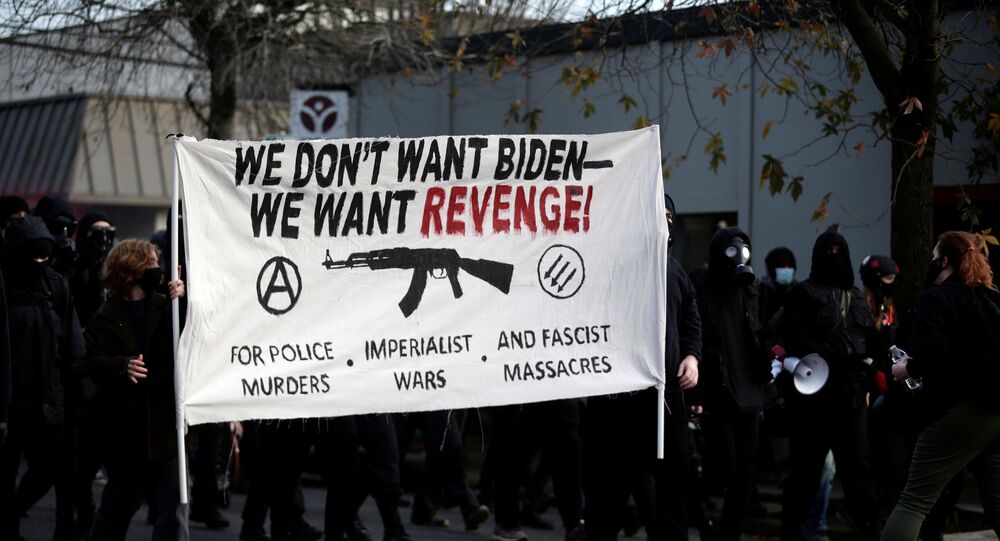 Portland has become the scene of frequent protests by Antifa and Black Lives Matter since the death of George Floyd. The demonstrations often turn violent and result in clashes with police. Former President Donald Trump has harshly criticised both movements for aggressive behaviour.

While thousands of people gathered in Washington, DC to attend the inauguration of Joe Biden, Antifa protesters attacked the headquarters of the Democratic Party in Portland and staged demonstrations in other cities across the United States.

Police said a group of about 200 protesters smashed windows and defaced the headquarters with anarchist symbols and slogans. One of the slogans read: "F**k Biden".

Liberal Antifa is yelling slurs at Biden and destroying the Democrats Oregon headquarters as we speak.

The left has the house, senate and oval and they are still destroying cities.

​In Portland Antifa protesters also marched through the city with banners, one of them read: "We don't want Biden – we want revenge! For police murders, imperialist wars, and fascist massacres".

​According to local police, they were one of at least four groups planning to stage protests in Portland. Officers tried to take poles affixed to banners that they believed could be used as weapons, but failed as protesters started throwing objects at them. Law enforcement had to use smoke canisters to escape the protesters.

Demonstrations occurred in other parts of the United States. In Columbus, Denver, Sacramento, and Seattle protesters defaced buildings with anti-police slogans and burned US flags.

Antifa celebrate the inauguration of Joe Biden in Seattle
pic.twitter.com/kvZXLOHjXv

​In Denver two protesters were arrested for weapons violations during the burning of a US flag, local media reported. Demonstrators also chanted slogans denouncing both Republicans and Democrats.

In Sacramento protesters, some of them wielding shields and clubs, marched through the city chanting slogans against Immigration and Customs Enforcement.

"No prisons, no walls - no USA at all", chanted demonstrators as cited by the Daily Mail.

Former President Donald Trump wanted to designate Antifa a terrorist group. Before he left office, the Republican singed an executive order requiring Secretary of State Pompeo to "assess the actions of Antifa activists" and "stop its members from entering the United States". Trump blamed Antifa for violent protests that followed the death of George Floyd, an African American man, who died at the hands of a white police officer on 25 May 2020.