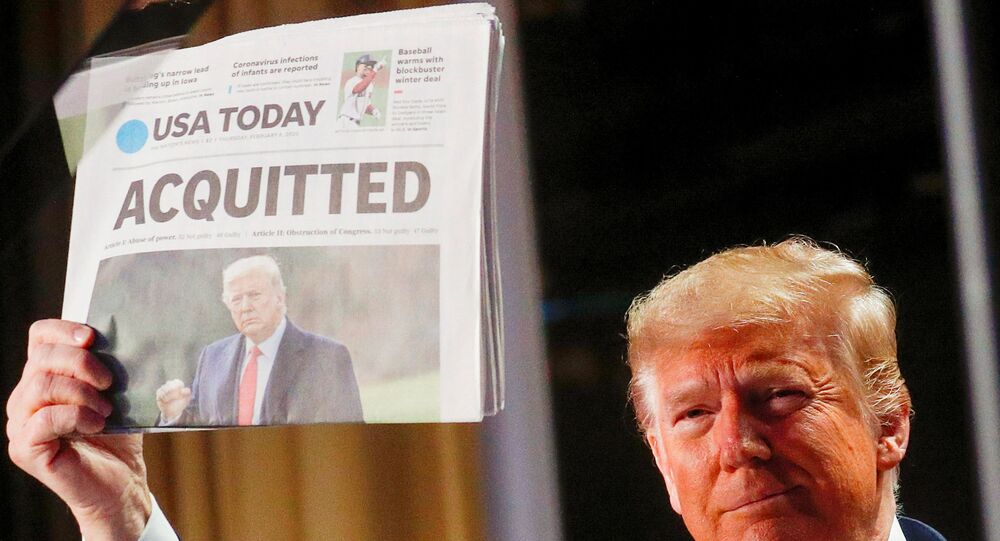 Republicans are reportedly less inclined to defend Trump than they were the last time he was accused of abusing power and obstructing justice. At the same time, warnings of a split in the GOP in the event of his conviction in the Senate make the outcome of the trial difficult to predict.

As the US Senate reconvenes and faces prospects of putting now-former President Donald Trump on trial, Republicans remain mostly uncommitted in terms of whether they are planning to acquit him or convict, CNN reported, citing accounts of a "wide range" of GOP senators. According to the broadcaster, a number of Senators have refused to say in advance whether they are going to defend or accuse Trump of being purportedly responsible for the 6 January Capitol riot, which claimed the lives of five people and delayed the certification of election results.

Many of the Republicans questioned by CNN have suggested they would make a decision on Trump's case after they hear it, meaning that the Democrats' arguments on the accusations might have weight on the outcome.

"I've heard people talk about a vote of conscience, and I think that's a good way to put it", Republican Senator John Cornyn shared.

The mood in the upper chamber is different from that of Senate trial when Trump was accused of abusing power and obstructing Congress' probe, but was later acquitted by the GOP vote that went practically along the party lines. Senator Mitt Romney was the only party member to vote in favour of convicting Trump, but even he remains undecided about the current case. At the same time, Senate minority leader Mitch McConnell directly blamed Trump for the 6 January riot and may opt for convicting the former president.

"[The mob was] provoked by the President and other powerful people. And they tried to use fear and violence to stop a specific proceeding of the first branch of the federal government which they did not like", McConnell said.

The incident sparked harsh criticism not only from Democrats but also among Republicans, with some of them blaming Trump for purportedly inciting protesters to break into the Congress building. Now the former president faces trial in the upper chamber. A 2/3 majority is required to find him guilty of inciting insurrection. If Trump is convicted, the senators will then possibly vote to ban him from running for office again, as the former president had suggested he might attempt another bid in 2024. Only this time the Democrats can vote Trump out by themselves since the vote requires a simple majority – 50 votes that the party recently secured plus the tiebreaker of Vice President Kamala Harris.

According to CNN, Senate Republicans are divided into several groups in their attitude towards Trumps's upcoming trial. Some of them are cautioning against convicting Trump, warning that such a step, which opens the way for banning Trump from running for office, might lead to a potential split within the party. The former president's ally Lindsey Graham was the first to warn fellow party members about the possibility of such an outcome publicly.

Another group suggests that such a trial might be unconstitutional since it would begin when Trump is no longer the US president. The legal debate around this issue still continues. Should the trial be scrapped, GOP lawmakers will have the option of condemning Trump without convicting him or banning him from running for office and risking a split in the party and voter base, CNN suggested.

Still, with the majority of Senators reportedly remaining undecided and some of them seeking ways to prevent the trial, it is difficult to predict if the Democrats will be able to recruit the 17 defectors from the GOP needed to convict the former president. Such an endeavour remains especially questionable considering that some of them will be facing re-election in a matter of two years in states that voted for Trump both in 2016 and in 2020.

Canadian Accused of Sending Ricin to Trump to Remain in Custody, Face Trial in Washington