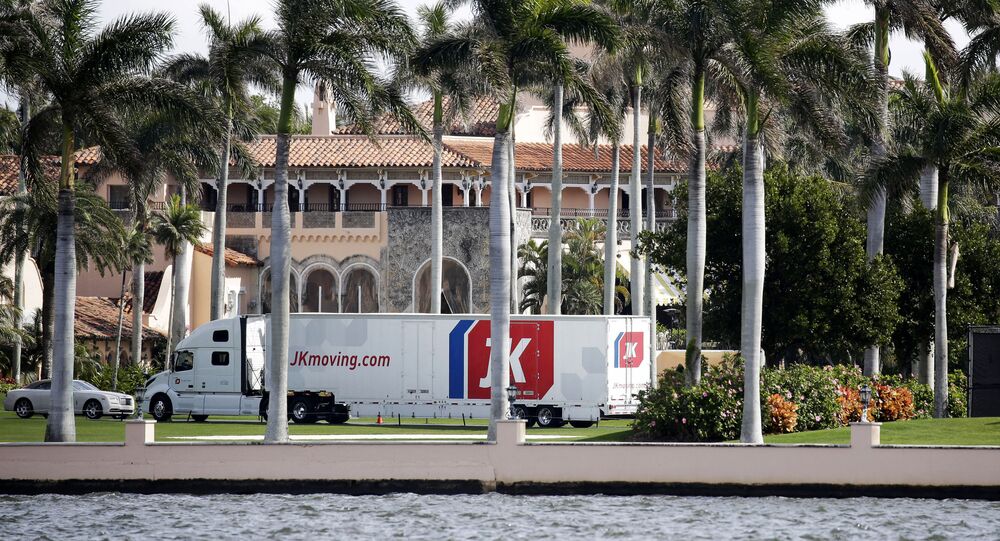 Trump is expected to depart for Palm Beach on board Air Force One in two days - the last time he can use the aircraft before his tenure as the 45th president of the United States officially runs out at noon on Wednesday, January 20.

According to WFLX, vehicles belonging to Virginia-based company JK Moving Services were seen outside the golf club at around 9.30 am, with employees carrying large boxes into Trump's estate.

A man was detained and questioned on Monday after police spotted him wandering along the president's property, the Daily Mail newspaper reported, adding that the officers had been speaking to him for at least an hour, but the "suspect" eventually was released.

Meanwhile, Trump has recorded a farewell message to Americans, expected to be released as early as Tuesday, a CNN reporter shared on Monday afternoon. The farewell address will reportedly include his accomplishments while in the White House.

NEW: President Trump recorded a farewell address from the White House on Monday, CNN has learned, offering a list of accomplishments from his four years in office. It was a taped valedictory message from the State Floor of the residence, which could be released Tuesday.

First Lady Melania Trump issued her farewell message earlier in the day, and on Sunday, US Vice President Mike Pence made his final official appearance at the Fort Drum military reservation in Jefferson County, New York.

Trump to Leave White House With Neither Color Guard, Nor 21-Gun Salute Expected

Local officials have been preparing for the US president's arrival for some time already. Last week, White House staffers were captured on camera while loading large boxes, allegedly with Trump's possessions, into moving trucks, apparently destined for his Mar-a-Lago estate. A Lincoln bust and some old newspapers were reportedly spotted among them.

Ya don't wanna miss this! Staffers are packing and loading Trump's stuff into the moving trucks! #SendTrumpHome pic.twitter.com/1vK1EW65Sh

​Palm Beach officials said that road closures at Mar-a-Lago will begin Tuesday at 8 pm and, according to Palm Beach Police, will remain in place for some time after Wednesday.

Chief of Police and Town Manager’s letter to the community. pic.twitter.com/uh7XRh6lN9

President Trump is set to leave DC for Mar-a-Lago at about 8 am, just hours before his presidential term officially ends and Biden takes the oath of office as the next US president. If Air Force One lands after Biden is sworn in, it will be designated "Special Air Mission 29000."

Prior to that, Trump is reportedly going to attend a goodbye ceremony, but no military-style farewell is expected. It appears that Pentagon has declined to organize an Armed Forces Farewell tribute on the last day of Trump's presidency, breaking with a tradition that has been held since Ronald Reagan's term in office. CNN reported citing a person who spoke with Trump on the matter that the president had allegedly demanded a "military sendoff" with a lot of Trump supporters.

Trump changed his primary residence from New York City to Palm Beach back in 2019. It is not clear, however, if he will reside there permanently after his tenure at the White House ends. Chances are high he may run for the presidency again in 2024.