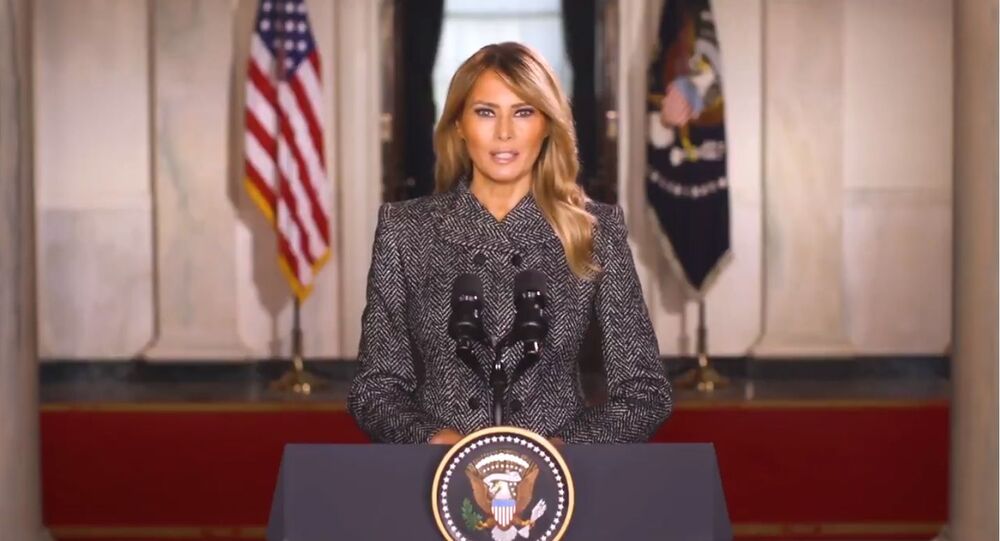 As Donald Trump’s presidency comes to an end, the First Lady reached out to her followers with a farewell message, describing the past four years as “unforgettable.”

Melania Trump issued a goodbye message Monday that marks the results of her time as the First Lady of the US. In an almost seven-minute long video, filmed at the White House, she praises the work of service and law enforcement members, nurses and doctors, and urges Americans to not “lose sight of your integrity and values.”

“The past four years have been unforgettable. As Donald and I conclude our time in the White House, I think of all the people I have taken home in my heart and their incredible stories of love, patriotism, and determination.”

“Be passionate in everything you do but always remember that violence is never the answer and will never be justified,” Trump says in the video, referring, as one may think, to this month’s Capitol siege – although she does not mention it directly.

Melania also spoke about her “Be Best” campaign, calling for people to “be an ambassador of Be Best.”

“In all circumstances, I ask every American to be an ambassador of Be Best. To focus on what unites us. To rise above what divides us. To always choose love over hatred, peace over violence, and others before yourself.”

The First Lady will be departing the office with a record-low popularity rating, a recent poll shows, with 47 percent of respondents assessing her performance as First Lady as negative. This figure, however, is even lower for her husband, who is disapproved by 62 percent.

The farewell message comes in the wake of the recent DC riots, when thousands of Trump supporters stormed the US Capitol in a bid to prevent the Congress from certifying Biden's victory in the election. Trump said that he was “outraged” by the violent riot at the Capitol and confirmed that he was working to ensure a smooth transition of power to Biden and his administration.

Trump and his spouse are going to skip Joe Biden’s inauguration, which will be held on January 20. Trump will reportedly attend a farewell ceremony early on Wednesday before departing for Mar-A-Lago resort in Florida. No military sendoff is expected, however.