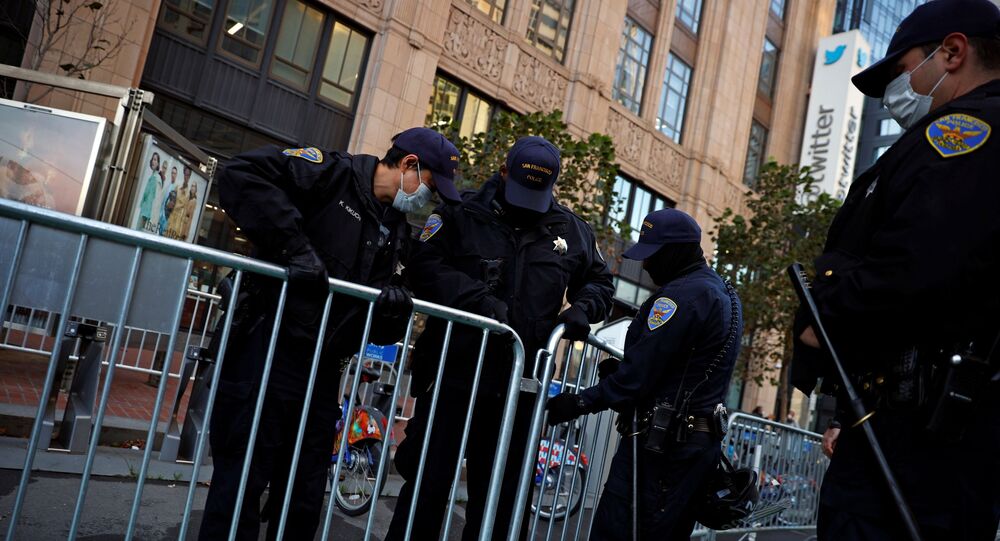 On Friday, Twitter banned US President Donald Trump’s account for an unlimited period following the deadly attack on Capitol Hill, accusing him of encouraging supporters to break into the Capitol building.

Police in San Francisco are preparing for protests reportedly scheduled by Trump supporters for 12 January in front of Twitter’s head office. Users alleged to be participating in the anticipated protest have reportedly claimed that they are frustrated with the suspension of the president’s personal account.

Barricades have been erected at the Twitter building on Market street, and a police contingent has been stationed alongside. According to CBSN, police are authorized to engage nearby law enforcement agencies for additional aid.

Twitter employees are primarily working remotely due to the coronavirus pandemic.

There is a heavy police presence at Twitter Headquarters on Market street. Police are set up all along 9th and 10th streets as well. SFPD prepared for Pro Trump protests in response to @TwitterSafety banning President Trump. I'll tell you what I saw on @kron4news now! #twitter pic.twitter.com/qNmAFeKCMC

The protest was supposed to have started at 8:00 am, local time, but few people arrived, giving rise to speculation that the planned event was a provocation. The same day, speculation occurred in some social media accounts claiming that antifa participants would purportedly dress like Trump supporters and burn down the 6-story Twitter headquarters.

For those wondering about the protest at Twitter HQ today in San Francisco - SF PD put about a hundred officers on it, but only one man turned up.

Amazing what lots of arrests and no fly lists can do. pic.twitter.com/ncqCw90Pbq

But the pro-Trump mob expected to descend into San Francisco following the permanent banning of President Donald Trump on his preferred social media platform was nowhere to be found. pic.twitter.com/5F4E9XbqZ6

Earlier reports claimed, citing an unnamed source, that Trump would fight Twitter and other social media platforms for his suspension, remarking that "Big Tech and Capitol Hill Democrats seem to have the magic ability to galvanise the Republican base in a way that only they know how to do".

On 8 January, the tech giant initially banned Trump’s account soon after he posted a video calling upon his supporters not to use violence and leave the Capitol building during the unrest on 6 January. Later the page was permanently blocked. The company has cited "the risk of further incitement of violence" and possible calls for more protests ahead the inauguration of President-elect Joe Biden.

On Wednesday a mass protest in Washington occurred amid the certification of the Electoral College vote. US president’s supporters violently attacked and entered the Capitol and interrupted the joint Congress session, breaking windows and causing damage to parts of the interior, as well as causing 5 deaths. At the same time, Trump urged his supporters in Twitter "to go home now" and observe "law and order".