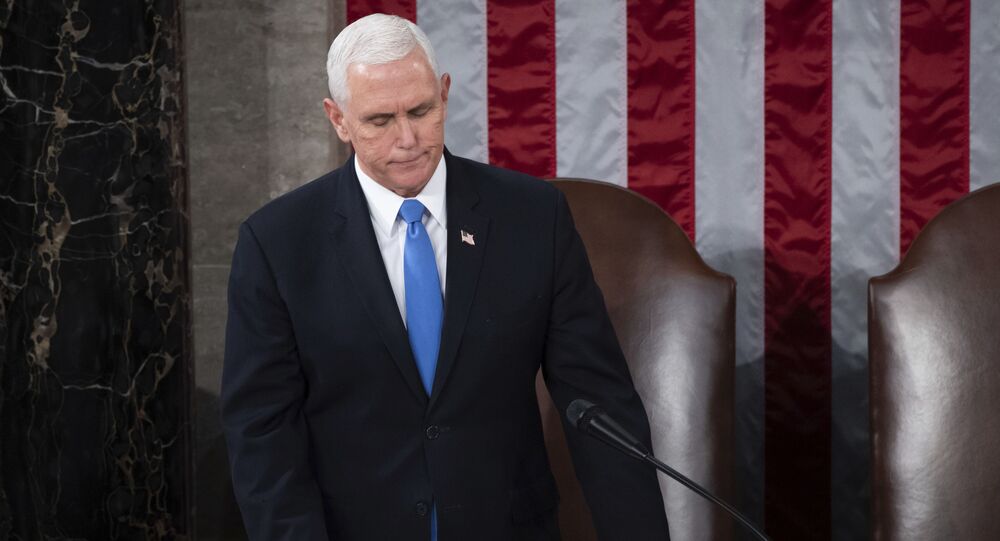 Before the Capitol Building was stormed on Wednesday, President Trump told the crowd of supporters in Washington DC that “if Mike Pence does the right thing, we win the election.” But the vice-president defied the President by following precedent and sticking to performing a purely ceremonial role by certifying 3 November election results.

Vice-President Mike Pence was “very upset” with Donald Trump for pressuring him to overturn the election results during congressional certification and eventually blaming his long-time ally for not having “the courage” to do so, according to Senator James Inhofe.

Inhofe, the Republican congressman from Okhlahoma and Pence’s close friend in the Senate, told the Tulsa World that he has “never” seen the vice-president “as angry” as he was on Wednesday, when the Make America Great Again protesters stormed the Capitol Building.

“I had a long conversation with him,” Inhofe revealed, discussing his communication with Pence. “He said, 'After all the things I've done for [Trump]’.”

Before a joint session of Congress on 6 January, which should have certified Joe Biden’s victory, President Trump called on Pence to show “extreme courage” and send Electoral College votes back to the states for correction. According to the President, his win was fully dependent on the vice-president.

When Pence, who is the president of the Senate and holds a ceremonial role in the certification procedure that has no real power, indicated at the start of the session that he was not willing to break the law by ditching his official duties, Trump became furious.

“Mike Pence didn’t have the courage to do what should have been done to protect our Country and our Constitution, giving States a chance to certify a corrected set of facts, not the fraudulent or inaccurate ones which they were asked to previously certify,” Trump wrote in a tweet that has now been suspended by Twitter for violating the platform’s rules.

As the US President was sending his resentment through social media, protesters have moved to storm the building, eventually penetrating both chambers of Congress, damaging property and taking some fancy photos at the heart of America’s legislature.

Trump kept urging the demonstrators to remain “peaceful” but his calls were all in vain.

At least four people have died during the unrest after clashes with law-enforcement agents.

© AP Photo / J. Scott Applewhite
Police with guns drawn watch as protesters try to break into the House Chamber at the U.S. Capitol on Wednesday, Jan. 6, 2021, in Washington

Pence remained in the building throughout the storming as some rioters rushed to the Senate floor reportedly looking for the vice-president. Trump’s right-hand man was said to have been sheltered at an undisclosed location at the Capitol until the unrest subsided and he returned to his duties, effectively certifying victory for Joe Biden and Kamala Harris.

Trump, who kept publicly maintaining that Pence has the power to overturn election results – something many observers with knowledge of the US Constitution have disagreed with – was outraged by the move.

“The thing [Trump] was most upset about and couldn't get over all day was the Pence betrayal,” a former White House official told the Washington Post. “All day, it was a theme of, ‘I made this guy, I saved him from a political death, and here he stabbed me in the back’.”

As Trump’s Twitter account - his busiest channel of communication with the world - remains suspended, it’s difficult to know what he feels about the situation right now. However, he has sent a statement through aides indicating that there will be an “orderly transition” of power to Joe Biden on 20 January.

Trump is still cryptically maintaining that it was “only the beginning of our fight to Make America Great Again".