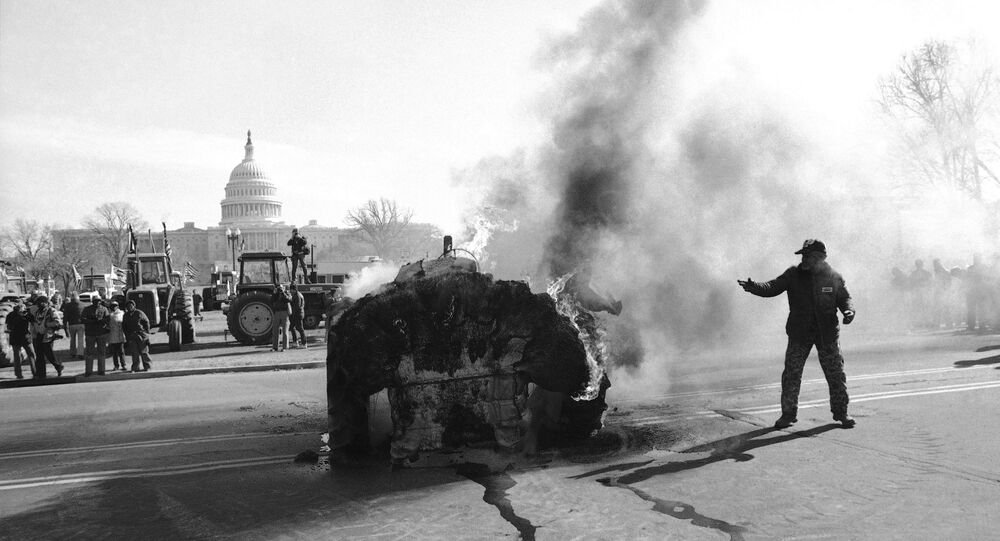 From Burning by British to Pro-Trump Riots: Key Moments When US Capitol Building Was in Peril

An air force veteran was shot dead and three other Trump protesters died of “medical emergencies” during a violent demonstration at the home of the United States Congress. But this is not the first time Capitol Hill has been in the spotlight.

Law enforcement agencies in Washington DC are conducting a post mortem into what went wrong on Wednesday, 6 January, and why supporters of US President Donald Trump were allowed to gain access to the Capitol building.

Joe Biden was finally confirmed by Congress as the 46th President of the United States in the early hours of Thursday after a Senate session which was delayed for more than five hours by the protests.

​So what is the Capitol and what other dramatic incidents have there been there?

In 1776 the United States of America became independent of Britain and the first President, George Washington, carved the District of Columbia out of Maryland and hired French architect Pierre Charles L’Enfant to plan a new city which was named after the president.

​L’Enfant identified Jenkins Hill as the ideal location for the Capitol building and described it as "a pedestal waiting for a monument."

The building was completed in 1800 and became the home of the Senate and the House of Representatives.

But in 1812 war broke out with Britain, which still controlled Canada, and King George III’s troops marched south.

In August 1814 British troops reached Washington and burned down both the Capitol and the White House, before withdrawing.

Architect Benjamin Latrobe supervised the rebuilding of the Capitol but between 1815 and 1819 Congress met first at Blodget’s Hotel and then on the site of what would later become the US Supreme Court.

Latrobe was replaced by Charles Bulfinch in 1818 and he redesigned the Capitol’s central section and erected a copper-covered wooden dome over it.

In 1851 a fire gutted the Library of Congress in the Capitol's west central section and during the Civil War the building was used as a barracks, hospital and bakery.

© Photo : Architect of the Capitol
Union soldiers outside the Capitol building during the US Civil War

On 4 July 1861 Congress agreed to award special powers to President Abraham Lincoln for him to conduct the war against the Confederacy to preserve the Union.

In December 1865, after the Confederates surrendered, Congress resumed in the Capitol and passed the Thirteenth Amendment, finally outlawing slavery.

The United States stayed out of the First World War when it broke out in Europe in the summer of 1814.

In 1915 Erich Münter, a former professor of German at Harvard University planted a bomb in the empty Senate chamber. It exploded, blowing out windows and doors but not injuring anyone.

​Münter, a spy for the Imperial German government who was also known as Frank Holt, escaped from Washington and planted a pencil bomb on a US ship exporting munitions to Britain.

He then shot and wounded US banking tycoon J. P. Morgan before finally being arrested.

Münter committed suicide in custody but it later emerged that he had poisoned to death his pregnant wife Leona in 1906.

In the early 1970s there were a number of domestic terrorist organisations active in the United States, including the Puerto Rican nationalist FALN, the Symbionese Liberation Front, the Black Panthers and the Weather Underground.

On 1 March 1971 the left-wing Weather Underground planted a bomb in a men’s toilet in the Senate part of the Capitol.

The telephone the Capitol switchboard with a warning and the building had been evacuated when the bomb went off, causing $200,000 worth of damage.

​While claiming responsibility, the Weather Underground blamed President Richard Nixon’s decision to send US and South Vietnamese troops into Laos.

The bomb shocked members of Congress and the chief of the Capitol Police, James Powell, was forced to completely rethink security in the building.

In the late 1970s the US economy lurched from one crisis to another, partly as a result of the oil crisis.

In the first week of February 1979 thousands of farmers descended on Washington from as far away as Texas, Colorado and Michigan, many of them bringing with them their tractors.

They lobbied for a new farm bill, which would increase crop prices, and had a sympathetic ear from President Jimmy Carter, himself a former peanut farmer in Georgia, who said: "I don’t know of any other group that has suffered more from inflation than farmers."

​The blockaded Pennsylvania Avenue with farm vehicles and the area around the Capitol was dubbed “Tractortown”.

Larry Schmitz, a farmer from Kansas, was quoted as saying: “We’re shut up here like a bunch of animals in a corral. We come here trying to do something for this country and they treat us like this.”

By late February most of the farmers had left Washington, with no obvious political gains, leaving the city with a clean-up bill of around US$1 million.

On 24 July 1998 a gunman queued up outside the Capitol and when he reached a security checkpoint he pulled out his weapon and shot dead a police officer, Jacob Chestnut.

A tourist was injured as other police officers fired back at the assailant, Russell Weston, who ran towards a door leading to the office of Texas Senator Tom DeLay, who was the Republican Majority Whip.

Fatally wounded, Detective Gibson and other officers eventually managed to overpower the gunman.

Chestnut and Gibson were buried at Arlington National Cemetery with full honours.

Weston, a paranoid schizophrenic, later told interrogators he was trying to gain access to a “ruby satellite” which he believed controlled “legions of cannibals” and was hidden in a safe in the Senate.

He claimed President Bill Clinton was "a Russian clone, brought to the United States for the purposes of communist insurgency."