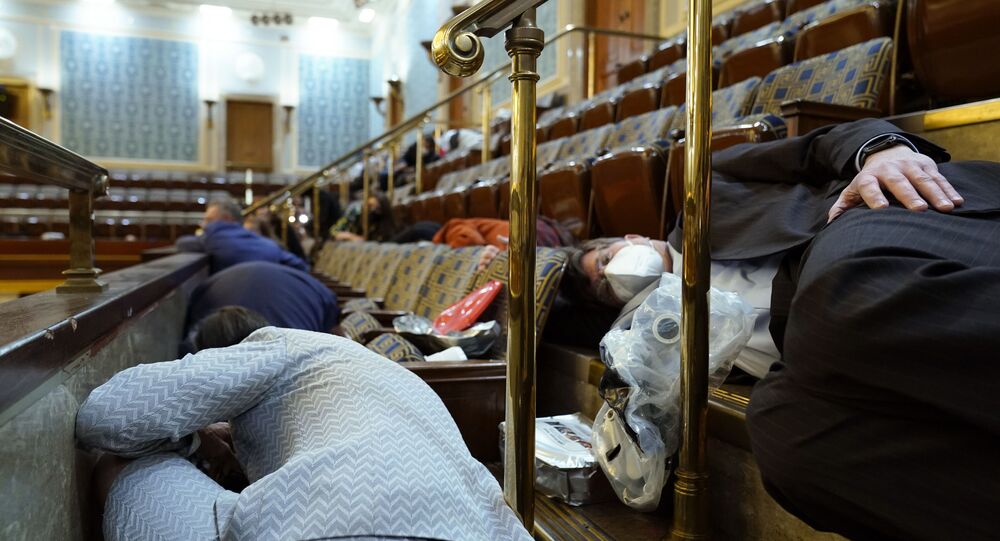 A woman who was shot while storming the US Capitol on Wednesday, 6 January, has been named as Ashli Babbitt, a US Air Force veteran from San Diego, California.

She was shot once, according to video footage which has emerged on social media, as she climbed through a broken window panel into a secure area of the building where Congressmen and women were about to confirm Joe Biden as the next President.

RIP Ashli Babbit THANK YOU FOR BEING SUCH A BRAVE PATRIOT. I love you and will never forget your ultimate sacrifice to this country and to The greatest President EVER!!! #AshliBabbit pic.twitter.com/tIXvgcmtOj

​Babbitt, 35, was one of thousands of Trump supporters who had descended upon the buildings after the outgoing President told them he would “never concede” defeat.

GRAPHIC FOOTAGE: Police fatally shoot a Trump supporter inside the Capitol building. This is a sickening crime that should be prosecuted as such. pic.twitter.com/X8JK7HplJ7

​Details are now emerging about who Babbitt was and there has been a very mixed reaction on social media, with her being described as either a “patriot”, “insurrectionist” or even a “terrorist” depending on the political views of those on Twitter.

​San Diego TV station KUSI said Babbitt, who lived in Ocean Beach, served for 14 years with the US Air Force and added: "She was a strong supporter of President Trump.”

#AshliBabbitt was shot storming the Capital—and died AFTER receiving first aid.#BreonnaTaylor was shot standing innocently at home—and died without receiving ANY aid.

​On Twitter Babbitt identified herself as a veteran and on Tuesday, 5 January, she tweeted: "Nothing will stop us....they can try and try and try but the storm is here and it is descending upon DC in less than 24 hours....dark to light!"

After her death many leftists responded sarcastically to her tweets with messages such as: “How did that go?”

​Her brother-in-law Justin Jackson told NBC: “Ashli was both loyal as well as extremely passionate about what she believed in. She loved this country and felt honored to have served in our Armed Forces. Please keep her family in your thoughts and respect their privacy during this time.”

According to her Facebook page, Babbitt ran swimming pool maintenance company with her husband, Aaron. It is not clear if he was with her at the protests at the Capitol.

#AshliBabbitt should have complied with the law 🤷🏿‍♂️

It's not so hard to follow orders from law enforcement 🤭 #BackTheBlue

​Washington police chief Robert Contee said 52 people had been arrested on Wednesday, 26 of them in the grounds of the Capitol, for curfew violations, unlawful entry and weapons charges.

Fourteen police officers were injured, one of them seriously. He also said two pipe bombs had been discovered, at the offices of both the Democratic Party and the Republican Party.

Twitter promotes sideshow clowns as “trending topics” to distract from things that actually matter — like the murder of military veteran and Trump supporter #AshliBabbitt by Capitol police. Everything is rigged. https://t.co/xkOozecmaK