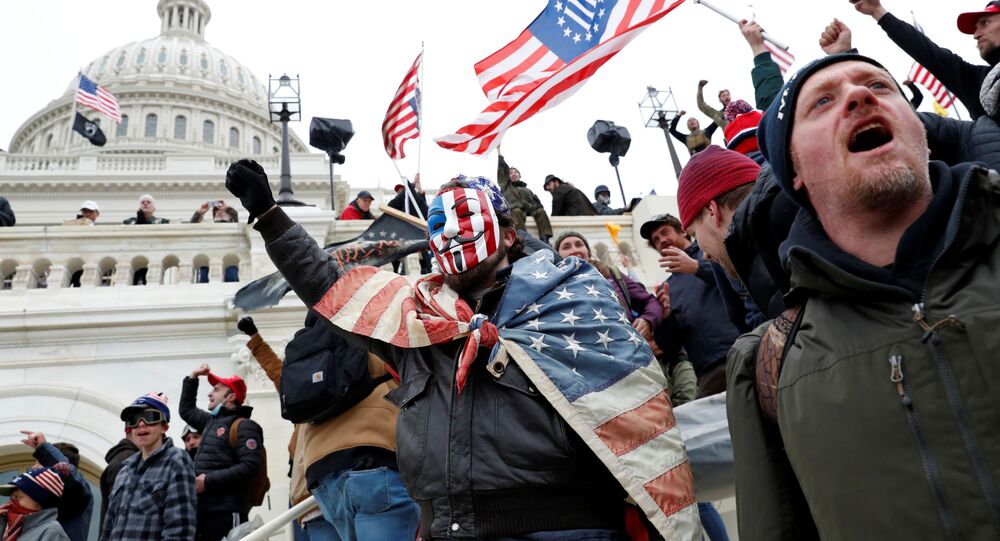 The peaceful rally in the US capital grew violent on Wednesday afternoon as protesters breached the US Capitol building, clashing with law enforcement. Protesters reportedly intended to remain inside the building through the night, but were driven back by police in riot gear to secure the building.

The unprecedented storming of the US Capitol building on Wednesday sparked backlash across the world, with world leaders condemning the violence in Washington, DC, and calling on protesters to leave the building.

Turkey was one of the first to comment on the events. The country's Foreign Ministry said Wednesday it was worried by the violence at the US Capitol Building and urged the rivals to exercise common sense. The statement came as a woman, a Trump supporter, was shot inside the US Capitol building amid the armed standoff between protesters and police.

"We are following with concern the post-election events in the US that have led today to an attempt by demonstrators to seize the Congress building. We call on all sides to be reasonable and exercise common sense," the Turkish ministry said.

The German Foreign Ministry on Wednesday called on German citizens in Washington, DC, to avoid the center of the city, especially the area where the US Capitol building is located.

"Observe the curfew and avoid visiting the city center, especially the Capitol Hill area. The demonstration is very likely to continue. Violence, including the use of firearms, cannot be ruled out," the ministry said in a statement obtained by Sputnik.

"The enemies of democracy will be delighted to see these incredible scenes from Washington. Big words have turned into acts of violence - on the steps of the Reichstag and now in the Capitol. The neglect of democratic institutions is destructive," Maas tweeted.

UK Prime Minister Boris Johnson said that the violence inside the US Capitol building was "disgraceful" and called for a "peaceful and orderly" transfer of power in the United States.

Disgraceful scenes in U.S. Congress. The United States stands for democracy around the world and it is now vital that there should be a peaceful and orderly transfer of power.

Canadian Prime Minister Justin Trudeau also expressed concerns as the violent events were unfolding at the US Capitol, but said he believes in American democratic institutions and hopes the situation quickly returns to normal.

"Obviously we're concerned and we're following the situation minute by minute," Trudeau told the News 1130 Vancouver radio station. "I think the American democratic institutions are strong, and hopefully everything will return to normal shortly."

Australia has condemned an incursion into the US Capitol Building and called for a peaceful transition of power in Washington, according to a tweet shared by Prime Minister Scott Morrison.

Very distressing scenes at the US Congress. We condemn these acts of violence and look forward to a peaceful transfer of Government to the newly elected administration in the great American democratic tradition.

NATO Secretary-General Jens Stoltenberg said on Wednesday that the outcome of the November 3 presidential election in the United States should be respected and called the ongoing violence inside the US Capitol building "shocking."

Shocking scenes in Washington, D.C. The outcome of this democratic election must be respected.

Commenting on the events, European Council President Charles Michel said that the European Union trusts the United States to ensure a "peaceful transfer of power" to Biden.

The US Congress is a temple of democracy.

To witness tonight’s scenes in #WashingtonDC is a shock.

EU High Representative for Foreign Affairs and Security Policy Josep Borrell called the storming of the US Capitol an "unseen assault on US democracy" and said that the results of the November 3 election should be respected.

In the eyes of the world, American democracy tonight appears under siege.

This is an unseen assault on US democracy, its institutions and the rule of law.

This is not America. The election results of 3 November must be fully respected.

The Parliamentary Assembly of the Organization for Security and Co-operation in Europe (OSCE PA) has condemned the violence in DC and called for respect for democratic processes.

"In response to clashes in and around the United States Capitol building in Washington, DC, the leaders of the OSCE Parliamentary Assembly’s recent election observation mission in the United States and OSCE PA President Peter Lord Bowness condemned the violence and urged respect for democratic processes. They also expressed appreciation for members of Congress and other political leaders, including those in the incumbent President’s party, who have denounced the protest," the OSCE PA said in a statement.

The head of the European Parliament, David Sassoli, said that the US is able to protect its democratic values.

Deeply concerning scenes from the US Capitol tonight. Democratic votes must be respected. We are certain the US will ensure that the rules of democracy are protected.

Storming of US Capitol as Peaceful Rally Becomes Violent

President Donald Trump has repeatedly urged protesters to leave the US Capitol and go home. Earlier, the president delivered a speech near the White House in front of thousands of supporters as Congress held a joint session to finalize certification of Joe Biden's presidential election victory. Soon after, pro-Trump supporters stormed Congress which forced an evacuation of lawmakers. One woman was shot and at least 13 people have been arrested and five weapons seized.

Following the unrest, both Twitter and Facebook locked temporarily the official accounts of President Trump over "violating their policy" That followed Twitter's removing a total of three tweets "that were posted earlier today for repeated and severe violations of our Civic Integrity policy."

President-elect Biden said that the storming of the Capitol building is an assault on the rule of law and democracy and called on protesters to end their siege. "To storm the Capitol … threatening the safety of duly elected officials, it's not a protest, it's insurrection," he told reporters.

Commenting on the events, US Secretary of State Mike Pompeo slammed the storming of the US Capitol building, calling it "intolerable both at home and abroad."

The building was declared "secure" later in the day, and House Speaker Nancy Pelosi said that the certification of Biden's victory will continue shortly, despite unrest in the city.