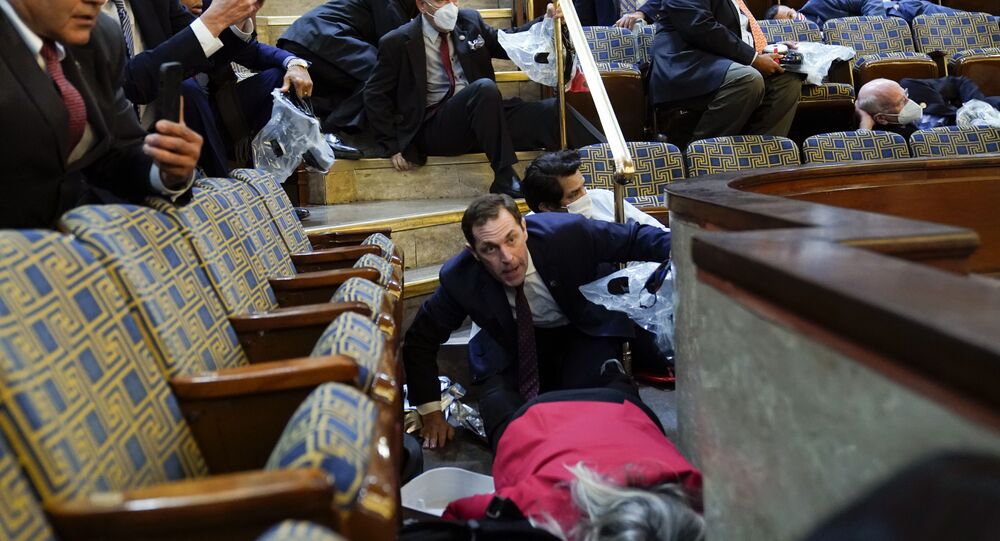 Earlier this week, Enrique Tarrio, leader of the pro-Trump group Proud Boys, was arrested in Washington, DC, in connection with attacks on several Black churches in the city last month as the group came to DC for Wednesday’s demonstrations. He was released, but barred from the city until his June court appearance.

At the urging of US President Donald Trump, hundreds of his supporters who are attending the “Stop the Steal” rally in Washington, DC, moved to storm the halls of the US Capitol building on Wednesday, where US Electoral College votes are being counted.

Video footage shot from the National Mall on Wednesday afternoon shows hundreds of Trump supporters trying to bowl over police barricades and shove past police lines in an attempt to enter the national legislature. Federal lawmakers have gathered to verify the results of the November 3, 2020, US presidential election, which Trump has claimed was fraudulent.

Capitol Police pushed the Trump supporters back and used a lot of pepper spray. pic.twitter.com/9bnYLbhWxR

What remains of a barricade. pic.twitter.com/yeIMBlsm1X

​Several protesters managed to get inside the Capitol building and could be heard yelling through the halls as security retreated to the doors of the legislative chambers. They also discharged a fire extinguisher at press members attempting to film them.

Trump protesters just discharged a fire extinguisher outside Senate chamber. Many protesters are inside building, and most people are hiding from them pic.twitter.com/0y2sk8LHWd

​Inside the chamber, police reportedly briefly drew guns as the doors were barricaded with furniture against demonstrators outside.

They’re shooting into the chamber. pic.twitter.com/l9owW7BAVt

​However, some appear to have gotten inside the Senate chamber and taken over the dais.

​According to reports, several Capitol Police officers have been injured in the clashes, and the Capitol has been placed on lockdown.

​Outside, protesters were ordered to disperse by police and threatened with “riot control agents” and arrest if they did not.

#DC #StopTheSteaI
Trump supporters have been ordered to disperse

​"We will never give up, we will never concede. You don't concede when there's theft involved," Trump told the crowd outside the White House prior to the chaos. Trump told his supporters they didn’t want "emboldened radical left Democrats" and the fake news media to get away with "stealing" the vote. However, he also criticized “weak” and “pathetic” Republicans who sided against him. Trump claimed that the country "has had enough."

He has maintained that US President-elect Joe Biden’s November 3 victory was the result of electoral fraud by Democrats in several closely contested state ballot counts and claims to be the rightful victor of the election. However, the courts have rejected Trump’s lawsuits aimed at challenging the results, and the US Electoral College cast its votes last month in line with the results of the November election. On Wednesday, Congress will certify those results as the final step of verification before Biden is sworn in as president on January 20.