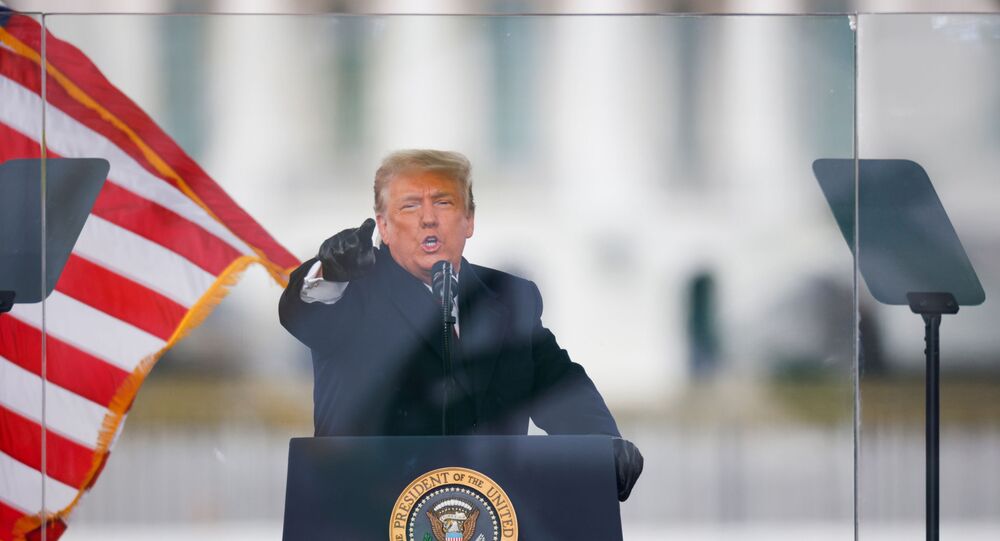 Congress is expected to formally certify the election results in President-elect Joe Biden's favour on Wednesday, with the formality coming over two months after the 3 November election, and weeks of claims by the incumbent president that the vote was rigged against him.

President Donald Trump has once again doubled down on his allegations of voter fraud, saying that he will "never" concede the election.

"We will never give up, we will never concede. You don't concede when there's theft involved," Trump said, speaking before a crowd of supporters behind a pane of bulletproof glass outside the White House on Wednesday.

"We have hundreds of thousands of people here and I just want them to be recognised by the fake news media – turn your cameras please and show what's really happening out here, because these people are not going to take it any longer," he added, referring to the size of the rally.

Crowd continues to increase in size with Trump supporters for today’s rally in Washington, DC. pic.twitter.com/poVMoDPBoa

"It would be really great if we could be covered fairly by the media. The media is the biggest problem we have as far as I'm concerned – the single biggest problem. The fake news and the big tech. Big tech is now coming into their own. We beat them four years ago. We surprised them, we took 'em by surprise, and this year they rigged an election. They rigged it like they've never rigged an election before," Trump alleged.

Saying he and his supporters didn't want "emboldened radical left Democrats" and the fake news media to get away with "stealing" the vote, Trump said the country "has had enough."

Trump added that his pollsters told him that if he went from 63 million votes like in 2016, "to 66 million there was no chance of losing. Well we didn't go to 66, we went to 75 million, and they say we lost – we didn't lose. And by the way, does anybody believe that Joe had 80 million votes? He had 80 million computer votes. It's a disgrace."

The president went on to compare the 2020 vote to those held in Third World countries, saying their elections "are more honest than what we've been going through in this country."

Trump also said he "hopes" that his vice president, Mike Pence, "does the right thing" and protects the country and the constitution by allowing states to 'revote.' "All Vice-President Pence has to do is send it back to the states to rectify, and we become president and you are the happiest people." Otherwise, he claimed, the country would be "destroyed" by Biden.

The president also accused Democrats of "using" the coronavirus pandemic as a means to steal the vote, pointing to the widespread use of mail-in ballots, which helped undo his large election-night lead. "And then late in the evening or early in the morning, boom these explosions of bulls***," Trump complained, referring to alleged mass-vote dumps in his opponent's favour.

© Flickr / Stephen Melkisethian
As US Congress is Set to Certify Biden's Presidential Win, How Are Electoral College Votes Tallied?
Along with Democrats, Trump attacked those "weak" and "pathetic" Republicans who did not support his bid to challenge the results. "Many of the Republicans I helped get them get in, I helped them get elected. I helped [Republican Senate Majority Leader] Mitch [McConnell] get elected...And then all of the sudden you have something like this where it's like 'oh ah gee, maybe I'll talk to the president sometime later,'" he said.

"You've got a lot of great ones, but you've got a lot of weak ones. They've turned a blind eye even as Democrats enacted policies that shipped away our jobs, weakened our military, threw open our borders and put America last," Trump said. The president encouraged his supporters to "primary the hell out of" those Republican lawmakers who haven't supported him.

He also criticised some of his appointments, including his three Supreme Court justices and former Attorney General Bill Barr, saying the media had pressured them into ruling against him in the recent election-related votes to avoid being seen as his "puppets."

Trump and his allies have spent the past two months accusing Democrats of conspiring to rob him of his election victory through mail-in vote dumps, voting machine irregularities, and other possible illegal activity in key battleground states. None of the dozens of lawsuits launched by his legal team have stood up in court, including a case by the State of Texas in the Supreme Court.