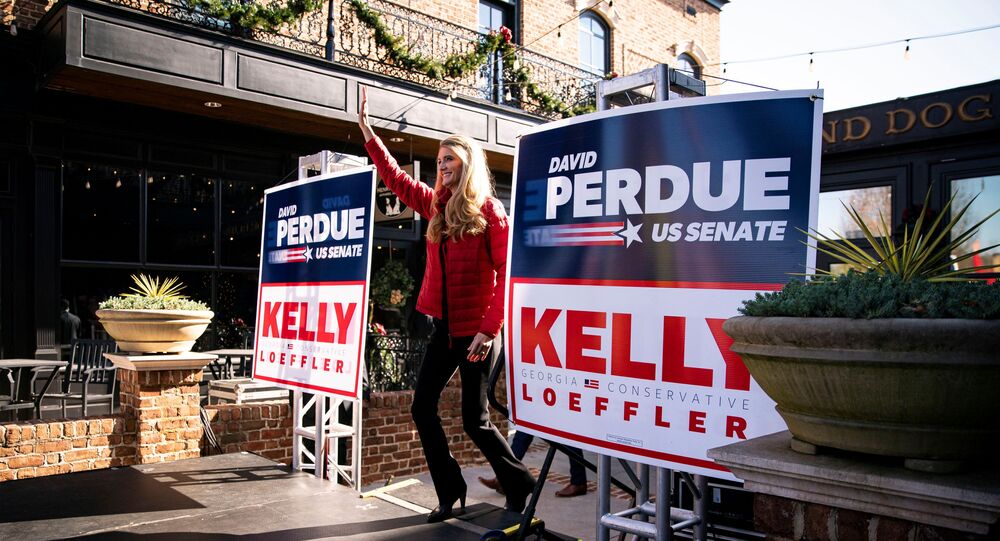 On 5 January, two Senate runoffs kicked off in Georgia, a long-time Republican stronghold. Political scientists from the state have explained why the January elections are so important and how Georgia’s demography may influence the outcome of the races.

The two Georgia Senate runoffs will determine which party controls the US Senate, which currently stands at 50 Republicans and 48 Democrats. None of the senatorial candidates managed to secure the needed 50% or more in November. Democrat Raphael Warnock outperformed Republican Sen. Kelly Loeffler by 7%, while GOP Sen. David Perdue ran ahead of his contender Jon Ossoff by just 1.8%.

Should the Democrats win both seats, then the party will take over the upper chamber, given that Vice President-elect Kamala Harris will break any ties and tip the balance in the Dems' favour. However, if the GOP wins just one of the races, the Republicans will continue to maintain control of the Senate.

Why Senate Race is Crucial for Both Parties

"If the Democrats win, it would be huge for the party, and more than just a narrow control of the Senate", says John A. Tures, political science professor at LaGrange College, Georgia. "It would show that two candidates who had never held office before just won against two incumbents in a formerly red state. It would definitely be a trend-setter".

However, it would be equally important if the Republicans come out on top which would mean that both incumbents could win despite Trump's falling approval rating, down to 39% in Gallup, according to the political scientist.

At the same time, a GOP victory in Georgia is likely to frustrate Joe Biden's legislative agenda on some issues, he believes, but suggested a few moderates from the Republican Party, including Mitt Romney, Lisa Murkowski, Susan Collins, and Ben Sasse, may still sign on to Biden's "moderate" initiatives.

On the other hand, Biden "will have to watch out that he's not too moderate, because a few progressives may frustrate him, especially in the House", according to Tures. He adds, however, that "Trump [has] scared" both wings of the Democratic Party "into some sort of unity, which might last another 2-4 years, or longer if Trump or Trump Jr. tries to make a comeback".

In case the contenders win with a razor-thin margin, that would demonstrate that Georgia has become a "purple", i.e. a "moderate" state, he remarks.

"In this cycle Democrats are eager to win the seats but President Trump is quite popular with voters that cast ballots for Republicans on an irregular basis so his being here energises some potential voters who might not have voted otherwise, so on the whole he brings enthusiasm to the election", says Dr Chris Grant, professor and chair of Political Science at Mercer University, Georgia. "It is very tight and if the Republicans lose, I expect the president will be blamed for caster aspersions on the validity of the electoral process and leading to this loss".

Still, a win of both seats by the Democrats could change everything in Washington, as they will be able to reform the Senate’s rules and eliminate the filibuster, according to him. After that, the Democratic Party will be able to unilaterally pass legislation without Republican support, Grant says, stressing that "this would represent the first time since 2010 Democrats had this sort of power".

However, on 9 November 2020, Democratic Senator Joe Manchin from West Virginia told Fox News that he would not vote to kill the legislative filibuster if there is a 50-50 tie in the Senate. Likewise, he promised to oppose packing the Supreme Court and criticised "defunding the police", "Medicare for All", and the "Green New Deal" initiatives. Should he deliver on his promise, Vice President-elect Harris will be unable to step in. Manchin has a record of opposing the Dems' legislative initiatives before.

Georgia is Changing and GOP 'Needs to Adjust to New Reality'

Meanwhile, US observers emphasise the enthusiasm of Georgian voters. The state's early voting began on 14 December and has shown impressive results.

"With more than 3 million votes already cast, this will be, by far, the largest turnout for a runoff", says Dr Charles S. Bullock, professor of public and international affairs at the University of Georgia. "It has been fuelled by the presence of not 1 but 2 high profile contests, the expenditure of $800 million, the presence of an African American candidate which will help mobilise Black voters, and the visits of the nation's leading political figure. All of this coupled with aggressive ground games by both parties".

John Tures recalls that "normally", special elections in America have had "pathetically low turnout", because they are not held at the regular election time.

"In 2008, there were 2.1 million Georgians who voted in that special election, between Senator Saxby Chambliss and State Rep Jim Martin", he points out. "Early voting before Election Day alone already surpassed that this year! I think it's because there's a lot at stake, there are two contests in the same state, and Senate control is on the line".

Early voting data suggests that both runoffs would be "nail-biters", according to The New York Times. Still, the newspaper has dropped the hint that this time the Democrats have a bigger share of the early-voting electorate than they did in November 2020. The question is whether the GOP will be able to outperform these results.

Previously, Republicans have had a substantial advantage in the state's elections dating back to the 1990s, notes Chris Grant. However, it appears that the Democrats have steadily been gaining in their share of the statewide vote since 2006, according to him.

"Georgia is changing and is likely to be more competitive in the future", the professor points out. "The question in Georgia is ultimately about demographics - the state is becoming less Caucasian, younger, and better educated - all of which favour Democrats. I think that a successful Republican campaign of the future will have to be more appealing to these demographics to win statewide. The problem with a base that is old and overwhelmingly white is that it expires with time. The Georgia GOP needs an infusion of younger, culturally diverse, and broad thinkers—and they are out there—unfortunately for the state’s GOP, they are not the target audience".

In December 2020, Politico placed an emphasis on the growing contest between "the Old South" and "the New South" in Georgia. According to the magazine, the immigrant population leaped by 84% between 2010 and 2018, "putting Georgia on the fast track to become majority-minority by 2030". The state has seen an influx of young people of colour, who tend to vote for the Democratic Party. For its part, National Public Radio (NPR) also drew attention to a substantial surge in Black voter turnout in the state during the early voting in 2020.

"Georgia is changing – the United States is changing so it is incumbent on both political parties to change for their own survival", Grant underscores, suggesting that the GOP has a chance to capture the imagination of many more voters if it instrumentalises the issues of racial and gender equality, environmental protection, and support of small businesses.

"Win or lose, Georgia will be a toss-up state for the next several election cycles", presumes Charles S. Bullock. "Moreover, Georgia gives insight into what will be happening in the Growth South, i.e. North Carolina, Florida and Texas. As these states become more competitive, GOP ability to win the presidency and to get congressional majorities becomes difficult".

Georgia On My Mind: Biden and Trump Hold Rallies Ahead of Decisive Election for US Senate