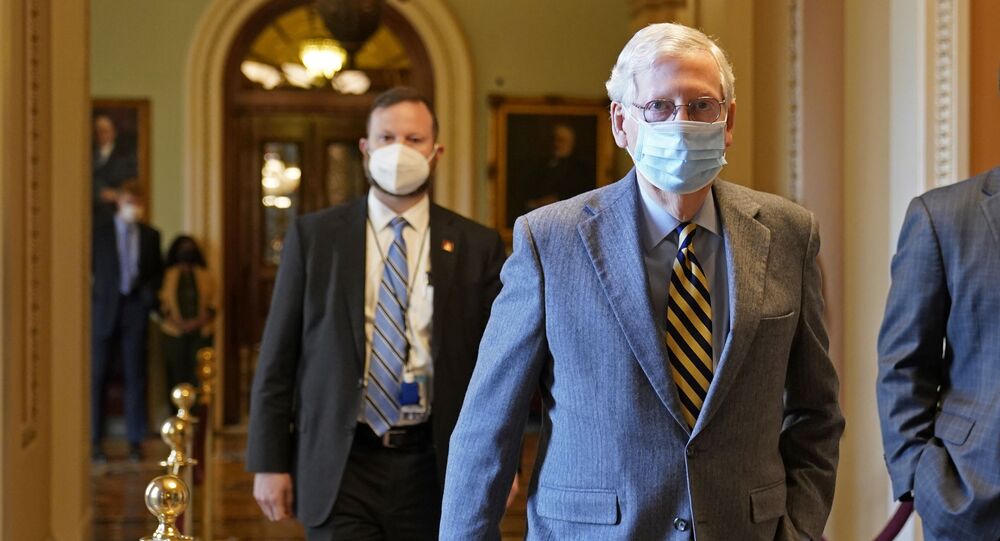 The Democrat-run House of Representatives earlier joined forces to agree on a stimulus check hike from $600 to $2,000 following a call from US President Donald Trump. But the bill is facing a tough challenge in the Congress’ upper chamber.

Republican Senate Majority Leader Mitch McConnell has again blocked a bill to hike stimulus checks to $2,000, describing it as "socialism for rich people," according to the Hill’s report.

It's the third day in a row that McConnell has opposed the bill, that was previously approved by the Democrat-dominated House and even green-lighted by many Senate Republicans. On Tuesday, he blocked the measure twice, first on the initiative of Democratic Leader Charles Schumer and then when Senator Bernie Sanders tried to push the bill through. On Wednesday, the legislation was again stonewalled by McConnell and another Republican, Senator Pat Toomey.

The blockage effectively means that a direct vote on the revised stimulus checks provision of the COVID aid bill was not forthcoming, after President Trump said that the $600 payment stipulated in the original version was just not enough.

Many Republicans agree with Trump’s opposition to the initially stated sums, including senators David Perdue and Kelly Loeffler, who are facing tough competition for the Senate run-offs on 5 January.

But McConnell remained defiant. He branded the initiative to raise payments as "another fire hose of borrowed money" and a purported gain for “Democratic rich friends,” maintaining that it had “no realistic path to quickly pass the Senate” and did not “align with what President Trump has suggested.”

© AP Photo / Jose Luis Magana
US Capitol Christmas Tree is seen at the U.S. Capitol at night after negotiators sealed a deal for COVID relief Sunday, Dec. 20, 2020, in Washington. Top Capitol Hill negotiators sealed a deal Sunday on an almost $1 trillion COVID-19 economic relief package, finally delivering long-overdue help to businesses and individuals and providing money to deliver vaccines to a nation eager for them

The Senate majority leader’s strong opposition to the measures is due to the fact that the measures outlined in the House-passed bill would potentially give some higher-earning households payments that they were not eligible for before.

"Our colleagues who purport to be the champions of vulnerable Americans now say that what struggling people really need is for Congress to stop focusing on targeted relief for them specifically and to instead send thousands of dollars to people who don't need help," McConnell said on Thursday.

He's made a competing proposal – to add the offer for bigger checks onto another bill to include a purported repel of Section 230, which ensures legal protection for big tech companies, as well as to set up a bipartisan commission to probe the president’s voter fraud allegations. But Democrats have signalled that these proposals are not something they're willing to back.

"The Senate is not going to split apart the three issues that President Trump linked together just because Democrats are afraid to address two of them,” McConnell urged on Wednesday.

Just a day before, Trump tweeted that Republicans “must approve the $2,000 payments ASAP” unless they have a “death wish.”

On Sunday, the president signed a $2.3-trillion COVID aid and spending package into law, effectively preventing the federal government’s shutdown and restoring unemployment benefits, but continued pushing for an increase in stimulus check to $1,400 from the $600 amount outlined in the original bill.