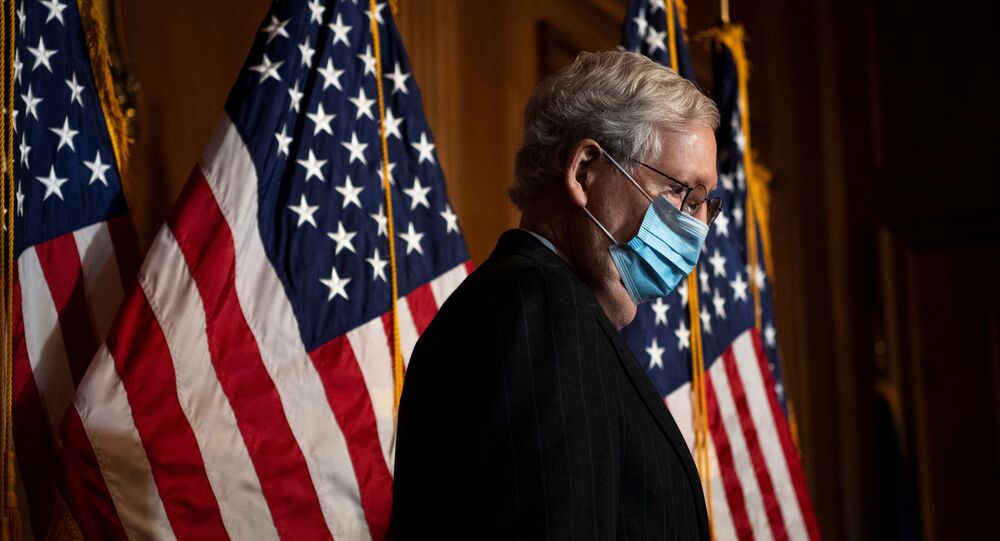 After the US House of Representatives passed a measure to increase the second round of stimulus checks to $2,000, Senate Majority Leader Mitch McConnell (R-KY) quickly shut down efforts in the Republican-held chamber to vote on the measure, instead introducing his own bill that tied the increase to two issues widely objected to by Democrats.

McConnell informed his fellow congressional lawmakers on the Senate floor Wednesday that the Democratic measure to increase the dollar amount of previously approved federal stimulus checks wouldn’t be taken up anytime soon.

The Republican leader stressed that the measure has “no realistic path to quickly pass the Senate,” as his priority in the chamber is the vote on overriding US President Donald Trump's veto of the 2021 defense bill. He added that the Senate is “not going to be bullied into rushing out more borrowed money into the hands of Democratic rich friends who don't need the help."

Late Tuesday, hours after McConnell rejected a vote on the House-passed bill to enlarge the federal checks by $1,400, the Kentucky official put forward a measure that offered the financial boost; however, he linked the funding to a repeal of Section 230 of the Communications Decency Act and the commission of a study that would examine allegations of voter fraud in the 2020 presidential election.

In sum, the inclusion of the repeal and the study effectively kills any chances of struggling Americans being given $2,000 to help with pandemic-related setbacks.

McConnell vowed that the Senate chamber “is not going split apart the three issues that President Trump linked together just because Democrats are afraid to address two of them.”

Earlier in the day, House Speaker Nancy Pelosi (D-CA) told reporters that Senate Republicans “are in denial of the hardship the American people are experiencing now, health wise, financially and every way” by blocking the funding legislation.

Although the US Congress had initially cleared $600 stimulus checks to go out to Americans, a push to increase the dollar amount to $2,000 gained new traction after Trump decried the approved amount as “ridiculously low.” The commander-in-chief also indicated that the COVID-19 relief was a “disgrace” in a video address last week.