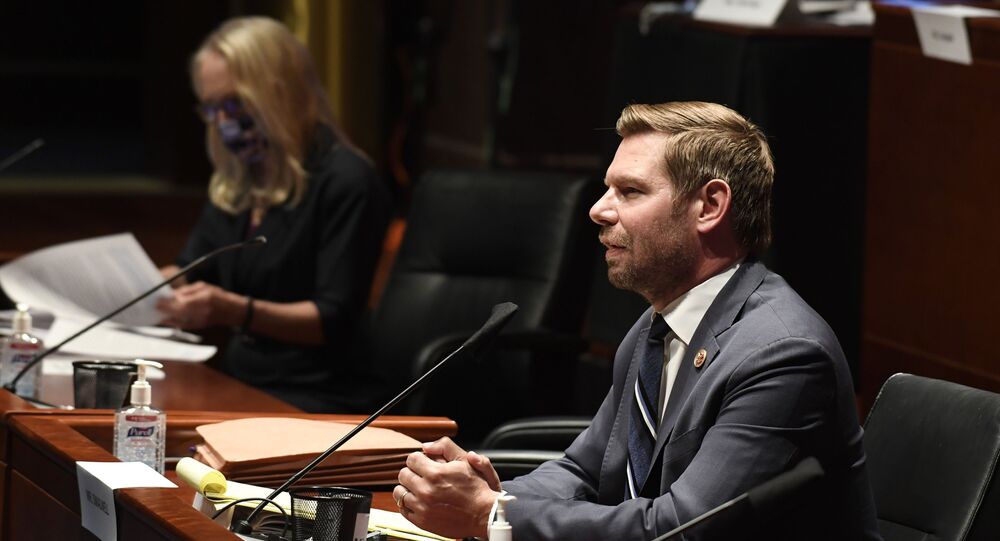 Democratic Representative Eric Swalwell's relations with a female student, purportedly a Chinese spy, reportedly became the subject of an FBI investigation in 2015. Some viewed their relations as a potential threat to national security. Swalwell denied any wrongdoing.

A member of the US House Permanent Select Committee on Intelligence, Eric Swalwell allegedly had an affair with a Chinese student in California, Fang Fang, aka Christine Fang. The affair was subject to a 2015 federal law enforcement probe into the possibly that Fang was spying for Beijing. No charges were subsequently filed against Fang, according to the Axios report published in December 2020.

A Texas representative in Congress, Dan Crenshaw, stated to Fox News on Monday, that mainstream US media has not paid adequate attention to the scandal, which demonstrates "double standards" in national media outlets.

"That act in itself is affecting the election and they know it. The double standard of the mainstream media is one of the largest challenges of our times. Everybody knows it", Crenshaw stated.

The Republican congressman urged the media to stop showing a lack of interest in covering a story possibly concerning US national security. He also stressed that fellow Democrats must question Swalwell supposed entanglement.

Earlier, in an interview with Fox News, the Republican Senator from Florida, Rick Scott, called the Speaker of the House of Representatives, Nancy Pelosi, to remove Swalwell from his post of intelligence committee member, as he "has access to information that could hurt us" in light of an alleged "relationship with the Communist Party of China."

"This is so basic. Nancy Pelosi cannot allow him to stay on the intelligence committee," Scott said to Fox News,  after he sent a letter to Pelosi calling for Swalwell’s ban from the committee.

Swalwell earlier said to CNN that he did not share any secret information with Fang, as the story was made public by people "who did share classified information", according to him. He noted that he was "shocked" when approached by the FBI about his acquaintance, and immediately "offered his help" to investigators. He underlined that personally, he was not under a law enforcement probe.

Swalwell was specifically vocal during President Donald Trump's 2019 impeachment, in support of the move. He believes this journalist investigation was started around that time to cause him "political harm".

In a concluding report of an investigation that took more than a year to conduct, Axios stated that although Fang is considered to be "one of many" political spies and was active during the Obama presidency, China's influence operations have continued during the Trump administration, making it a "core focus for US counterintelligence during the Biden administration".

The Trump administration often accused China of violating international rules of cooperation, while using soft power and clandestine measures to promote its influence across the world, especially in the US. The US State Department announced on Friday new sanctions against Chinese Communist Party officials, who are alleged to have performed malign activities, including attempting to influence academic and civil society groups in the US. The Chinese government and officials denied all the allegations.

Axios noted that while a student of California State University East Bay, Fang established particularly close ties with some rising policy makers in the US, as part of Beijing's political espionage operation to gain access to and influence the US political establishment.

Fang is said to have targeted American politicians in 2011-2015, largely Democrats, developing a relationship of an unknown level of intimacy with Swalwell. Fang claimed to have previously had sexual relations with at least two unnamed "Midwestern cities mayors".

According to Axios, as soon as Fang's activities attracted the attention of the FBI in 2015, the Democratic Representative cut all the ties with her. Reportedly, Fang left the country amid the FBI investigation, largely cutting all ties to her US acquaintances. She has not responded to comment requests by Axios.

Swalwell is known for his vocal support for the probe of allegation of ties between the US president's son, Donald Trump Jr., and Russian lawyer Natalia Veselnitskaya, who was claimed by some to be a "Russian spy", although never accused of the practice by US authorities. A long-lasting investigation resulted in US Special Counsel Robert Mueller's report, officially stating that the investigators could not find any direct evidence of "collusion" between Trump's team and his family, and Moscow.

Rep. Swalwell Calls to Create Commission to Investigate POTUS 'When We Escape This Trump Hell'