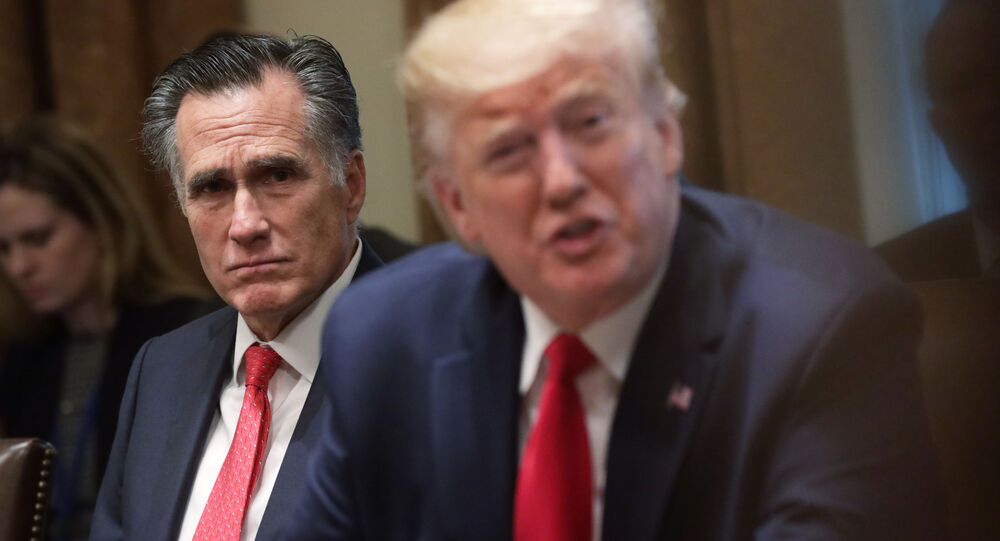 The Trump campaign’s lawyers stepped up its election fraud claims on Thursday, accusing Democrat Party-run cities in swing states of carrying out a “centralised” campaign aimed at robbing Trump of victory. A growing choir of Republicans, including many who tried to stop Trump in 2016, have accused him of undermining American democracy.

US President Donald Trump has taken aim at Utah Republican Senator Mitt Romney in a fresh tweet, dubbing him a RINO (Republican In Name Only) and suggesting that he probably felt that he got fairly beaten by Barack Obama in the 2012 election despite alleged evidence of voter fraud even then.

RINO Mitt Romney should read this. I’m sure, however, that he feels he got slaughtering by Obama “fair and square”. https://t.co/GGZKfSAp8z

Trump’s tweet links to a story by the Wayne Dupree Show, which recalled that in 2012, Trump tweeted about reports of voting machines “switching Romney votes to Obama,” and urged voters to “pay close attention to the machines” to prevent suspected fraud.

Trump’s jab at Romney comes amid Romney's rash of critical remarks against the president dismissing suspected election manipulation in the 3 November race and urging Trump to concede.

Romney lashed out at Trump late Thursday over the President's effort to overturn the 2020 race’s results through allegations of widespread voter fraud.

“Having failed to make even a plausible case of widespread fraud or conspiracy before any court of law, the President has now resorted to overt pressure on state and local officials to subvert the will of the people and overturn the election,” Romney tweeted.

“It is difficult to imagine a worse, more undemocratic action by a sitting American President,” the senator added.

Romney, who recently accused the Trump campaign of failing to find any evidence of election fraud, made the comments after attorneys filed a new lawsuit in Pennsylvania asking a judge to allow the state’s legislature to pick the state’s 20 electors on the basis of alleged large-scale irregularities involving mail-in ballots.

According to Trump’s lawyers, some Pennsylvania counties failed to observe the democratic principle of allowing “meaningful observers” to be part of the vote verification, a practice they intimated is practised even in third-world nations such as the Philippines, Namibia, Haiti and Mexico.

Romney is one of a handful of senior Republican officials who refused to endorse Trump in 2016, calling him a “phony” and “a fraud” who was “playing members of the American public for suckers". Trump called the senator a “choke artist” and “one of the dumbest and worst candidates in the history of Republican politics.”

The feud continued after Trump’s election, and Romney voted to convict Trump in the Senate impeachment trial in February this year.

Romney congratulated Democrat candidate Joe Biden on his projected victory in the 3 November election on 7 November, calling Biden and his running mate Kamal Harris “people of goodwill and admirable character”.