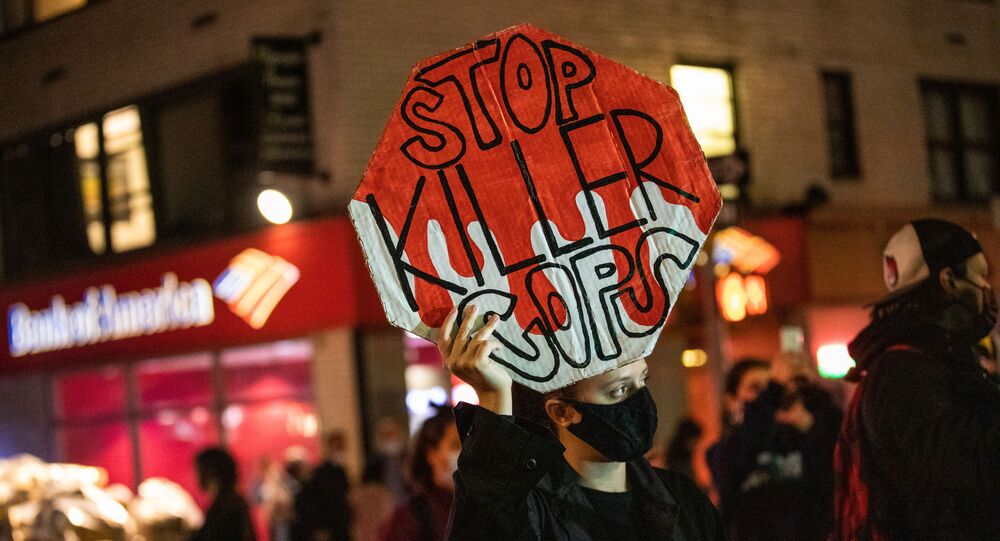 MOSCOW (Sputnik) - Peaceful protests in Manhattan in the wake of the US presidential election grew into clashes with law enforcement and scattered acts of arson, resulting in around 60 arrests, The New York Times reported on Thursday.

According to The New York Times, at around 8:30 p.m. on Wednesday (01:30 a.m. GMT, Thursday), a police detachment moved on a group of several hundred people who had gathered near the New York Public Library before marching to Washington Square Park.

Protesters reportedly briefly stalled traffic in the neighbourhood — the middle part of Manhattan — chanting slogans that included calls for setting police stations on fire. Police managed to push protesters away from the street and localise them on sidewalks.

Protesters, restrained by police and with more police arriving at the scene, began banging against signposts and yelling at officers, as described in the report. Footage emerged on the internet of a young lady without a face mask shouting at and spitting in an officer's face, after which she was tackled down to the ground. NYPD commented on it on Twitter, saying that "Actions like this will not be tolerated. Agitators who commit these acts will be arrested".

Actions like this will not be tolerated. Agitators who commit these acts will be arrested. https://t.co/oxew6gYNCI

​According to the NYT report, citing an anonymous senior law enforcement official, at least 58 people were arrested overnight in Manhattan.

Earlier in the day, the New York Police Department (NYPD) said that more than 20 people were arrested over attempts to "hijack a peaceful protest by lighting fires, throwing garbage and eggs in Manhattan", Police posted on Twitter pictures of weapons confiscated during the protest — these included knives, a taser and an M-80 explosive device.