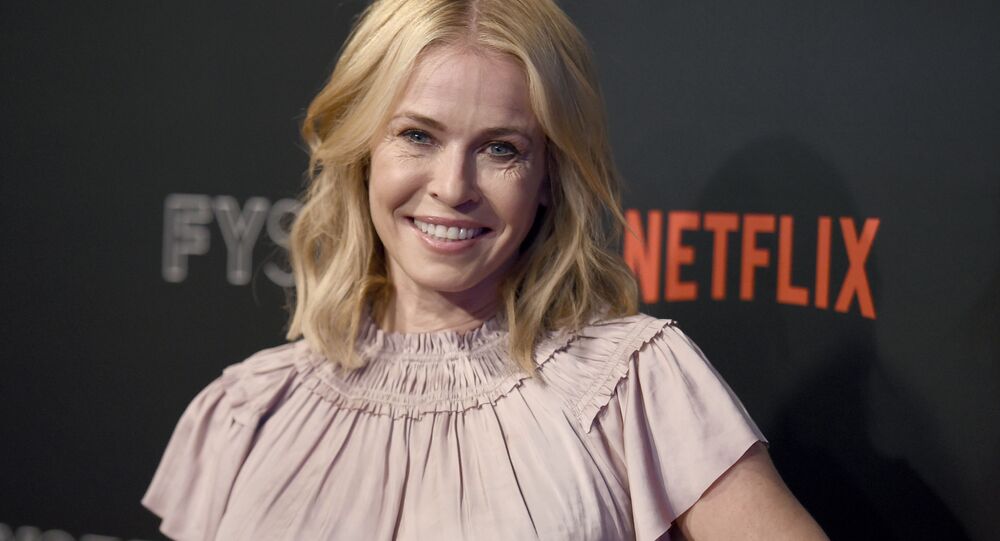 Last month, Handler, along with a group of other US comedians and actors, appeared naked in a video that warned US citizens of “naked ballots” that would not be deemed valid for the 3 November presidential election. Later, the 45-year-old comedian made headlines as she successfully called on ex-boyfriend 50 Cent to withdraw his support for Trump.

American actress Chelsea Handler posted on Instagram on Tuesday - the 2020 presidential Election Day in the United States - a video featuring her topless, except for two small “I Voted” stickers covering her nipples, to “make sure” that Americans vote.

“PSA: Democracy means that every vote is counted,” Handler captioned the short video. “If you see something that doesn’t look right at the polls, or need help voting, call the nonpartisan Election Protection Hotline: (866) 687-8683”.

The comedian also called on voters not to “let anyone intimidate” them in the voting lines, referring to incidents of Trump supporters carrying guns at polling locations on Election Day.

PSA: Democracy means that every vote is counted! If you see something that doesn't look right at the polls, or need help voting, call the nonpartisan Election Protection Hotline: (866) 687-8683 🗳 My apologies to my nieces and nephews.

Earlier in the day, The Charlotte Mecklenburg Police Department said that they had detained an armed man wearing a pro-Trump hat, combat boots and a visible sidearm at a polling location in North Carolina, according to The New York Times. The man, identified as Justin Dunn, 36, was said to have voted at the site but “continued to loiter” afterward, prompting a call to police “regarding Dunn possibly intimidating other voters.”

Handler, who appeared naked, along with a group of other US comedians and actors in a video in October advising Americans on voting by mail and warning of sending a “naked ballot”, offered in her Tuesday clip “apologies to my nieces and nephews” apparently for again appearing topless.

Celebs including @SarahKSilverman, @TiffanyHaddish, and @chrisrock are stripping down to bring attention to naked ballots and encourage voters to follow vote-by-mail instructions (via @representus) pic.twitter.com/VMr3LVY2C7

The actress expects the 2020 presidential election to be an “overwhelming victory” for the Democratic candidate, former US Vice President Joe Biden.

In late October, in the run-up to Election Day, Handler made headlines as she called on her ex-boyfriend, US rapper 50 Cent, to withdraw his support for Trump after the New York musician criticized Biden’s tax plans and called on his fans to vote for the Republican president’s re-election.

The comedian said, during an interview on NBC’s ‘The Tonight Show’ with Jimmy Fallon, that she was prompted to remind 50 Cent that “he can’t vote for Donald Trump” because he is African-American, arguing him to consider Trump’s response to the Black Lives Matter demonstrations that took place in the wake of the killing of George Floyd, a 46-year-old Black man in Minneapolis, Minnesota, at the hands of white law enforcement officers.

50 Cent later walked back his endorsement of Trump, stating that he “never liked” Trump that the Republican president “had me set up”.