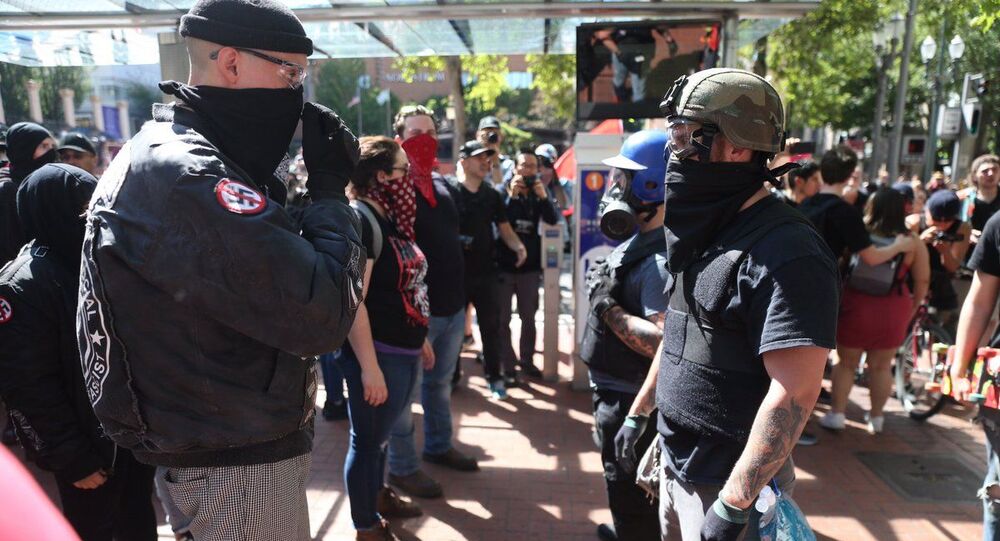 While social tensions are growing high in the US with less than a week remaining before Election Day, it is unlikely that the situation will calm down after 3 November, says US journalist Max Parry, commenting on the GOP's threat to impeach Joe Biden if he wins and Steve Bannon's prediction that Trump may run again in 2024 if he loses.

On 26 October, protests erupted in Philadelphia, Pennsylvania, hours after the police shot down Walter Wallace Jr., a 27-year old black man armed with a knife. As a result, at least 30 law enforcement officers were injured, five police vehicles vandalised, and multiple businesses across the city looted.

Meanwhile, on the US western coast, Portland Police Association President Daryl Turner called upon Mayor Ted Wheeler on Monday to "stand up and publicly support" cops who are dealing with months-long unrest in the city: "On almost a nightly basis for the past five months, members of the [Rapid Response Team] RRT have been on the front lines of keeping our city safe as many protest events have escalated into lawless riots filled with looting, arson, property damage, physical violence, and even murder," Turner wrote in an open letter on Facebook.

Fears are growing that the situation could aggravate even further after the election: according to KATU 2 ABC Portland's businesses are bracing for the potential spike in vandalism and violence following 3 November.

'Chaos and Disorder' in Post-Election America

"In my view, it is almost certainly guaranteed for there to be mass protests, riots and overall social unrest, including clashes between opponents and supporters of Donald Trump, following the election, regardless of the outcome," says American independent journalist Max Parry.

He highlights that the circumstances in which this particular election is taking place are "extraordinary and ripe for potential violence, given the ongoing pandemic, subsequent economic devastation and the already-ongoing protests and civil unrest since late May".

​"From Portland to Boston, we have seen clashes between left-wing activists and Trump supporters in recent months," the journalist stresses. "Gun sales and FBI background checks are also at record highs and we have seen heavily armed demonstrations, by both antifa and right-wing militias, in cities from Louisiana to Michigan."

​To add to the controversy, both presidential candidates Joe Biden and Donald Trump have repeatedly suggested the other is attempting to rig the vote. Therefore it is highly plausible that the legitimacy of the result will be challenged by either side after 3 November, according to Parry, who expects that the outcome could be debated in court for weeks or even months, "which would be the perfect recipe for chaos and disorder".

While law enforcement officers may back Trump during a potential post-election havoc – given the apparently "cosy relationship between pro-Trump militias and the police during the recent protests",  it is no secret that the president has been in a continuous battle with the national security bureaucracy his entire first term, according to Parry.

"This means it is also possible that that we could see more incidents of domestic terrorism like the alleged plot to kidnap Michigan Governor Gretchen Whitmer that was thwarted by the FBI, which may turn out to be a sting operation given we already know there were several informants and undercover federal agents used in the case," the journalist presumes, adding that he does not rule that "if the FBI has a vested interest in undermining Trump, it could engineer these kind of incidents to do so".

While it appears that neither Trump nor Biden's victory is likely to bring immediate solace to the nation, the ongoing exposure of "pay-to-play" schemes allegedly involving the Democratic presidential nominee and his son are unlikely to go anywhere after Election Day either. On 14 October, The New York Post started publishing emails, pictures and messages allegedly coming from Hunter Biden laptop's hard drive, obtained by ex-New York City Mayor Rudy Giuliani.

Following the expose which was suppressed by Facebook and Twitter and largely silenced by the US left-leaning mainstream media, Hunter Biden's former business associates, Bevan Cooney and Tony Bobulinski provided further details about Joe Biden's alleged role in his son's international business network. Speaking to Tucker Carlson on Tuesday, Bobulinski noted that he can bring in some pieces to the puzzle outlined in the September 2020 Senate report about the Bidens' financial operations.

​One might ask whether the GOP would move further and try to impeach Joe Biden in case he wins, as Republican Senator Joni Ernst warned in February 2020 in his interview with Bloomberg.

"Given how low the bar has been set to impeach a president in the wake of Trump's senate trial where he was acquitted in January, and that Biden himself openly boasted of committing the exact same offence of which Trump was accused only implicitly in threatening to withhold aid to the Ukraine, it is almost guaranteed that the Republicans would have grounds to undergo the same process to indict Biden in the event that he is elected," says Parry.

In his view, the emails published by The New York Post "clearly reveal the quid pro quo, influence peddling and profiteering that went on when Biden was vice-president".

"There is an abundance of evidence in comparison with the impeachment of Trump which proceeded on the basis of a transcript from a single phone call, where no compensation was offered and any wrongdoing dubious at best," the journalist underscores.

However, it all depends on whether the Republicans retain the Senate and/or take back Congress, "otherwise an impeachment trial may be dead in the water like the Democrats impeachment of Trump anyway", according to the journalist.

Even if Donald Trump loses the November vote to Joe Biden, he will be back for more in 2024, said former White House chief strategist Steve Bannon in a 19 October interview with The Australian. "I’ll make this prediction right now: if for any reason the election is stolen from or in some sort of way Joe Biden is declared the winner, Trump will announce he’s going to run for re-election in 2024," Bannon told the newspaper.

"It's possible considering most regard the outcome of the 3 November vote as a toss-up where the outcome will be heavily disputed and the loser may desire a rematch," Parry believes.

​However, one have to bear in mind that in 2024 Donald Trump will be 78: "Even with his impressive ability to host multiple rallies per day on the campaign trail at 74 years of age and his relative agility in comparison with Biden, he has still shown some signs of wear and tear with the stress of the presidency," the journalist says.

Still, nothing is written in the tablets of stone when it comes to Trump, so only time will tell how the situation will unfold, he concludes.