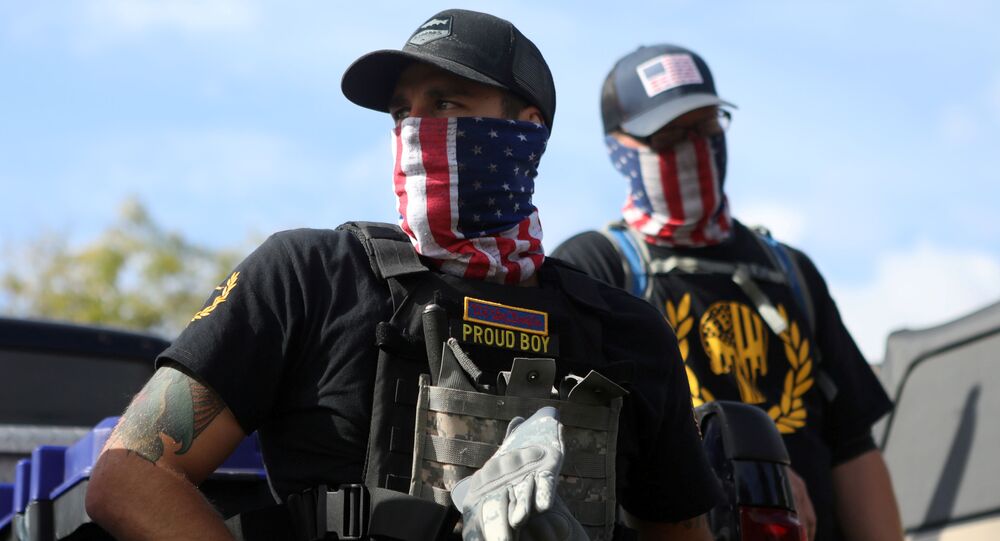 POTUS has repeatedly mentioned the Democratic presidential nominee's many slips of the tongue, saying last month that "maybe" he'll sign an executive order stipulating that Americans "cannot have" Joe Biden as US president.

Democratic presidential nominee Joe Biden referring to the Proud Boys as "poor boys" during Thursday's debate has prompted a wide array of sarcastic comments from social media users. The Proud Boys is classified as an "extremist" organisation by the FBI.

Some suggested that "Uncle Joe slipped because he's hungry", in an apparent nod to the so-called "poor boy" sandwich which originated back in 1929 in Louisiana.

The left should be disappointed. Joe had the opportunity to remind America about the Proud Boys and he called them the Poor Boys 😂😂😂😂 pic.twitter.com/ViNasoLNYQ

Biden calling The proud boys " the poor boys" made me laugh out loud. I bet this is what he calls them in private lol lol THE POOR BOYS ha

Maybe he was hungry, and wanted a sammich. pic.twitter.com/FFeK6tcj4x

This is what you can do with Joe! pic.twitter.com/QWwTgh8oIv

The proud boys when they see Joe Biden called them “the poor boys.” #DebateTonight pic.twitter.com/oUjeh6el7F

Others simply posted lol tweets, with one netizen noting, "the left should be disappointed; Joe had the opportunity to remind America about the Proud Boys and he called them the Poor Boys".

The comments came shortly after Biden tried to link President Donald Trump to the Proud Boys organisation following POTUS' statement during the debate that he is the "least racist person in the room".

"[…] He said about the Poor Boys last time he was on stage, he told them to stand down and stand ready. Come on, this guy has a dog whistle about as big as a fog horn", Biden claimed, referring to the first presidential debate on 29 September.

POTUS actually told the Proud Boys to "stand down and stand by", in what was followed by Trump saying in an interview with Fox News in early October that he condemns both the Proud Boys and "all white supremacists".

© REUTERS / MIKE SEGAR
Lawyer of Kenosha Shooter Threatens to Sue Biden Over 'White Supremacist' Remarks
The US president has repeatedly mocked Biden over the Democratic candidate's slips of the tongue and strange statements during the ex-vice president's public appearances.

Biden once claimed that he was elected to the Senate 180 years ago, and that he attended Delaware State University, which the facility denies. He also made a blunder, arguing in September that 200 million people had died from the coronavirus in the US.

Also last month, Trump, in turn, described the Democratic hopeful as the "dumbest of all candidates", and went further by saying that "maybe" he would sign "an executive order that you cannot have him [Biden] as your president".

57 Years After the March on Washington: White Supremacists Rise Again?