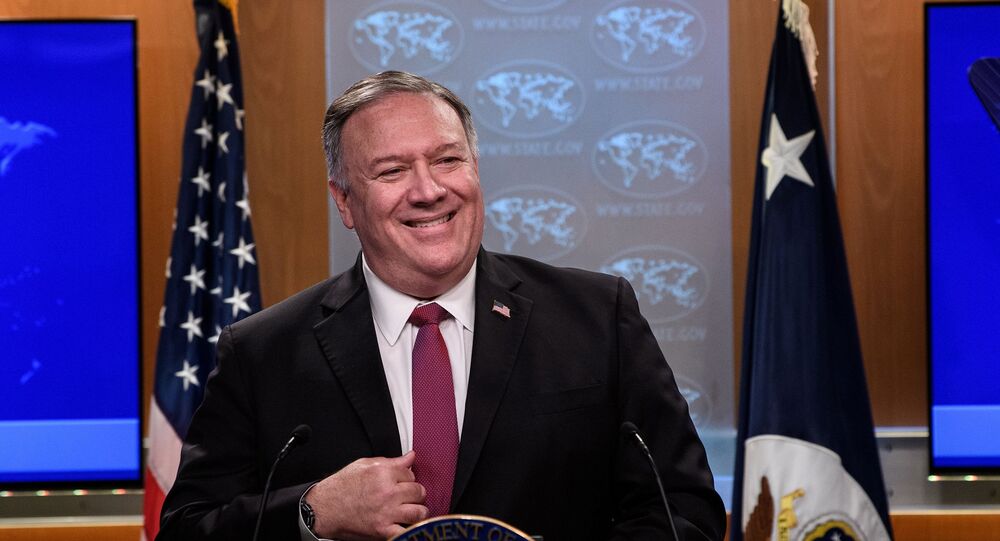 The watchdog drew parallels between Mike Pompeo’s alleged use of his personal email account and the case of Hillary Clinton, who used her private email server for government work while serving as US Secretary of State from 2009 to 2013.

The Washington-based non-profit ethics watchdog American Oversight has claimed in a report that US Secretary of State Mike Pompeo used his personal email account to exchange messages while he served as the director of the Central Intelligence Agency (CIA) between 2007 and 2008. The State Department has not commented on the matter yet.

The report argued on Wednesday that Pompeo "appears to have regularly received official schedules at his personal email account" while working at the CIA.

"This extensive use of personal email for agency business raises questions about what other activities Pompeo conducted over personal email, including at the State Department—and about whether efforts need to be undertaken to preserve government records in personal accounts", the document pointed out.

American Oversight also noted that while they had recently managed to review about 400 pages of Pompeo's personal emails that he sent while CIA director, there's still a question mark about whether he used a non-government account for sending emails while working in his current capacity.

The watchdog referred to a lawsuit they lodged in July 2019 that requested access to Pompeo's emails sent as US Secretary of State.

"The State Department has not yet produced documents in response to our litigation for his personal emails while serving as secretary, even as Pompeo's pledge to declassify former Secretary [Hillary] Clinton's emails has publicly underscored his purported commitment to transparency", the report underscored.

American Oversight apparently referred to Pompeo saying in an interview with Fox News earlier this month that he and his office are working to release Clinton's emails ahead of the 3 November presidential election.

The remarks came after President Donald Trump reproached Pompeo and Attorney General William Barr for failing to move fast enough to get the emails out. This followed POTUS announcing a "total declassification" of the documents related to what he dubs the "Russia hoax" and a Clinton-related scandal that emerged in 2015.

© AP Photo / Evan Agostini
'Trump-Russia' Hoax: Clinton, US Intel Agents Have Much to Explain in Coming Weeks, Analyst Says
At the time, Clinton, who served as US Secretary of State between 2009 and 2013, was revealed to have used a private server for her work-related correspondence and ignoring a government one, citing "convenience".

The issue resurfaced amid the 2016 presidential election campaign as the FBI probed Clinton for misconduct. Despite the use of a private server preventing her emails from being available via the Freedom of Information Act (FOIA), the FBI advised against opening a criminal case against Clinton, merely describing her actions as "extremely careless".

Trump has been facing allegations of collusion with the Russian government during his 2016 election campaign, despite the fact that no evidence was provided to support the claims. Moscow has repeatedly rejected the allegations, with then-Special Counsel Robert Mueller's probe revealing in March 2019 that there was insufficient evidence of any links between the Trump campaign and the Russian government.