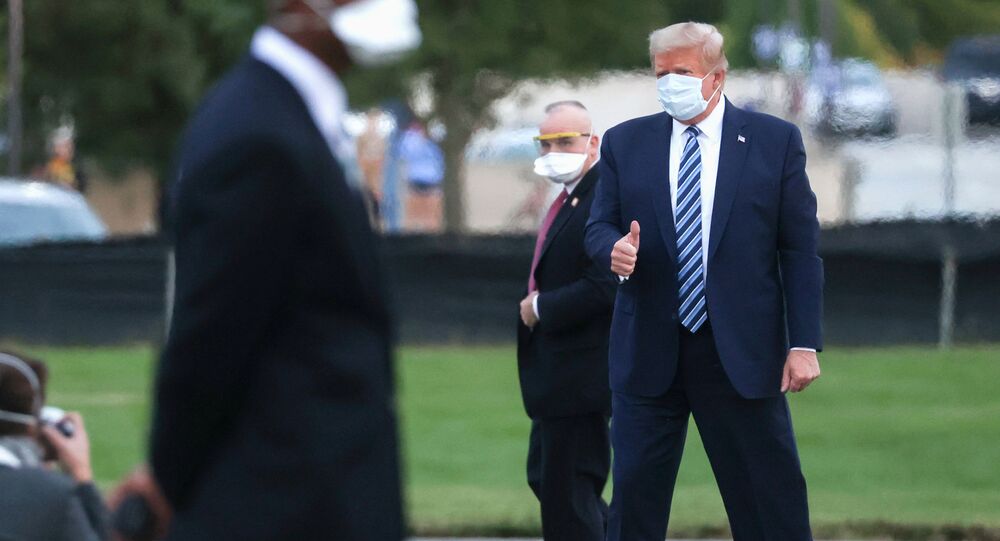 Earlier, POTUS said that he was feeling well after returning from the Walter Reed National Military Medical Centre, where he spent four days being treated for the coronavirus. He also said that he was ready for the second debate with Joe Biden, despite the latter suggesting that it might need to be postponed.

A White House physician has announced that President Donald Trump's vital signs remain stable and within the normal range, with POTUS not suffering from any coronavirus symptoms for at least 24 hours. The doctor added that the president has not had a fever during the last four days, while his immune system is producing detectible levels of COVID-19 antibodies.

The physician noted that Trump has not received any supplemental oxygen, nor has he needed any since his hospitalisation.

© AFP 2020 / ALEX EDELMAN
A car with US President Trump drives past supporters in a motorcade outside of Walter Reed Medical Center in Bethesda, Maryland on October 4, 2020.

Trump stated on 6 October that he was "looking forward" to a new round of debate with his Democratic opponent Joe Biden, despite only recently being released from the Walter Reed National Military Medical Centre. He spent four days there after announcing on 2 October that he had tested positive for the coronavirus. POTUS added that he is "feeling great", apparently referring to his health.

The second round is scheduled for 15 October and is set to take place in Miami. However, despite Trump's readiness, his opponent, Democrat Joe Biden, has expressed doubt whether the event should take place if the president is still infected with the coronavirus. At the same time, he did not completely rule out the possibility of the debate taking place as planned.

"If he still has COVID we shouldn’t have a debate. If the scientists say that it's safe and the distances are safe, then I think that's fine. I'll do whatever the experts say is the appropriate thing to do", Biden said.