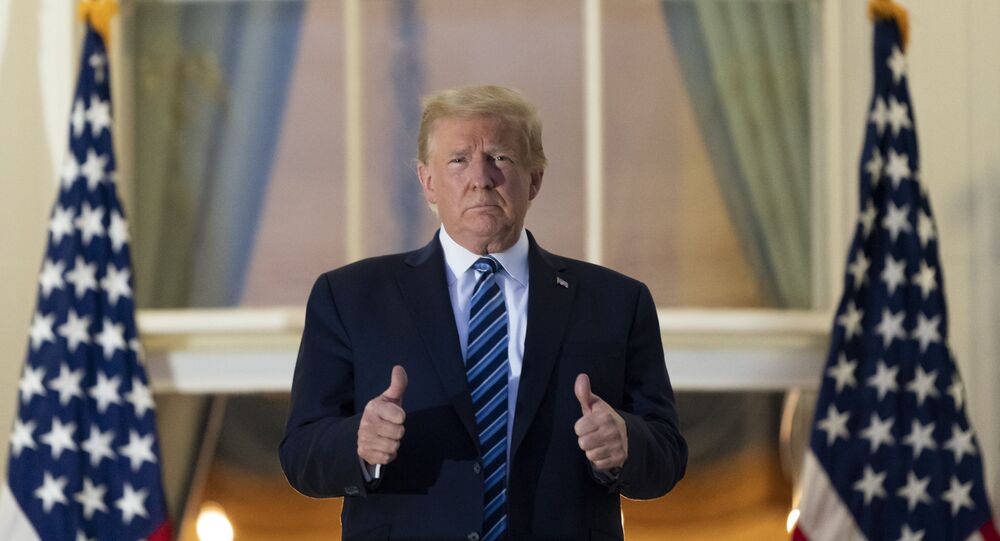 US President Donald Trump urged Americans on Monday to get back outside and not let the contagious COVID-19 novel coronavirus dominate their lives.

Trump posted a new video to Twitter on Monday that appeared to have been recorded shortly after he left Walter Reed National Military Medical Center in Bethesda, Maryland, and returned to the White House.

"Don't let it dominate, don't let it take over your lives," Trump added, echoing the words of a tweet he posted hours earlier.

The US president's scientifically ignorant advice comes less than a month after Trump confirmed the authenticity of months-old voice recordings in which he revealed he intentionally downplayed the COVID-19 pandemic in its early phases.

More than 210,000 novel coronavirus-related deaths have been recorded in the US, according to the Johns Hopkins University COVID-19 dashboard.

A second video contained no audio from the US president, but did feature 45 without a mask after he departed Marine One.

While at the medical facility, Trump was treated for the novel coronavirus with an experimental antibody therapy cocktail and remdesivir, an antiviral drug that is believed to shorten the necessary recovery time for COVID-19 patients. Dr. Brian Garibaldi, a physician on Trump's medical team, revealed on Sunday that 45 was given dexamethasone, a steroid that has seen positive results in patients with severe COVID-19 infections, including those on ventilators.

'Listen to the Scientists' - Joe Biden

"I view wearing a mask as a patriotic duty — to protect those around you," he said in a tweet issued during his NBC News town hall with Lester Holt on Monday evening.

I would hope that the President having gone through what he went through will communicate the right lesson to the American people: Masks matter. They save lives. pic.twitter.com/Hc8lovKEwB