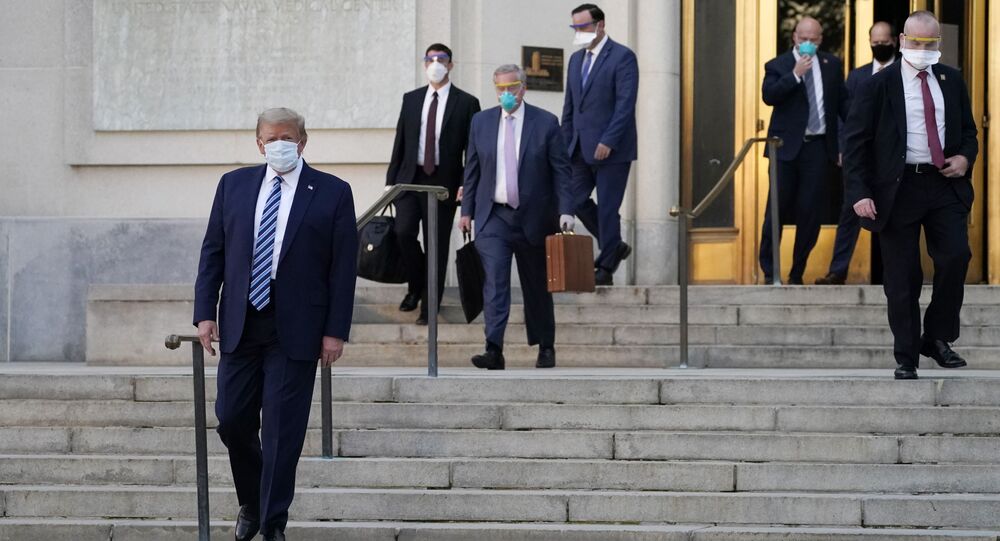 Trump raised his fist in the air and boarded Marine One shortly after leaving the Bethesda, Maryland, medical center on Monday around 6:38 p.m. local time.

​While at the facility, Trump was treated for the novel coronavirus with an experimental antibody therapy cocktail and a five-day course of remdesivir, an antiviral drug that is believed to shorten the necessary recovery time for COVID-19 patients.

The president paused for a photo shoot after Marine One touched down at the White House. Flanked by American flags, a unmasked Trump was seen saluting as his photographers snapped pictures of him.

Now with mask off, Trump stands on White House balcony to watch Marine One depart pic.twitter.com/WnTSP3UEgc

While Trump has maintained that he is doing well, Dr. Brian Garibaldi, a physician on Trump's medical team, revealed Sunday that the US president was given dexamethasone, a steroid that has seen positive results in patients with severe COVID-19 infections, including those on ventilators.

"Though he may not be entirely out of the woods yet, the team and I agree that all our evaluations, and most importantly his clinical status, support the president's safe return home, where he'll be surrounded by world-class medical care 24/7," said Dr. Sean Conley, another physician to the president, said Monday.