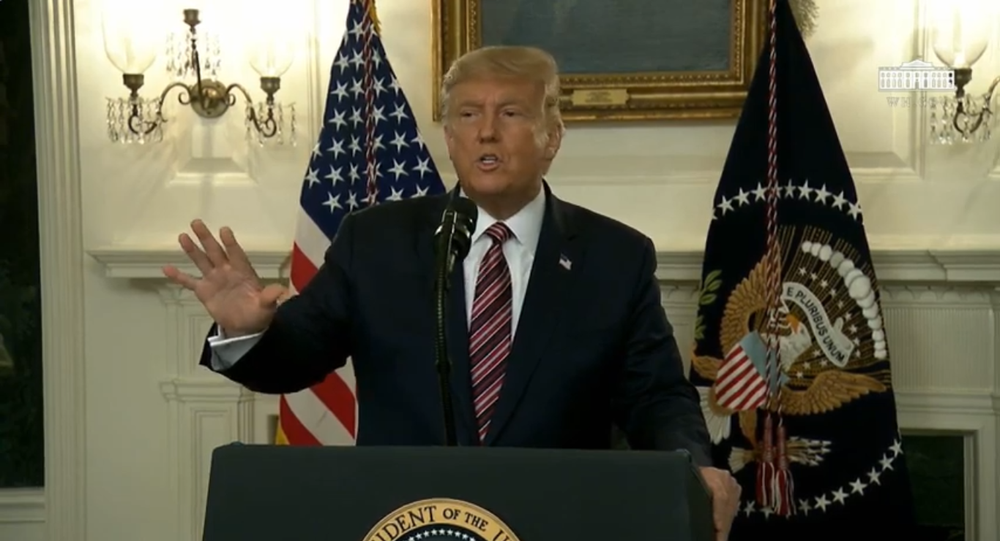 US President Donald Trump conceded on Wednesday that he had "perhaps" misled the US public regarding the danger of the COVID-19 novel coronavirus in the early months of the outbreak, following the release of interview quotes by journalist Bob Woodward.

On Wednesday, Woodward released excepts from his upcoming book "Rage" that included statements by Trump in interviews with the journalist in which he revealed he knew the dangers of COVID-19 long before they were revealed to the US public.

At a news conference later on Wednesday in which Trump announced new additions to his list of potential US Supreme Court nominees, a reporter asked Trump if he had indeed misled the public, as Woodward's book claims.

“In order to reduce panic, perhaps that’s so," Trump said.

"Certainly i’m not going to drive this country or the world into a frenzy," he told reporters. "the last thing you want to do is create panic … we don’t want to show panic."

"We had to show calm," he continued. "The last thing we can show is panic or excitement or fear … we had to take care of the situation we were given."

Trump said he was "very open" about information he had, including with Woodward, although he noted he considers the journalist's book "just another political hit job."

When another reporter followed up about the timeline of Trump's public statements about COVID-19 as compared to when he told Woodward he knew about certain dangers, Trump deflected, saying that in February, he "didn't really think it was going to be to the point where it was. All of a sudden, the world was infected, the entire world was infected, everyone was scrambling around looking where to buy face masks and all of the other things," which is why he only invoked the Defense Production Act in March.

Earlier on Wednesday, White House Press Secretary Kayleigh McEnany said Trump "has never lied to the American public on COVID. The president was expressing calm, and his actions reflect that."

Since the COVID-19 pandemic began, more than 6.3 million Americans have been infected with the novel coronavirus, and roughly 190,000 have died, according to data compiled by the New York Times.