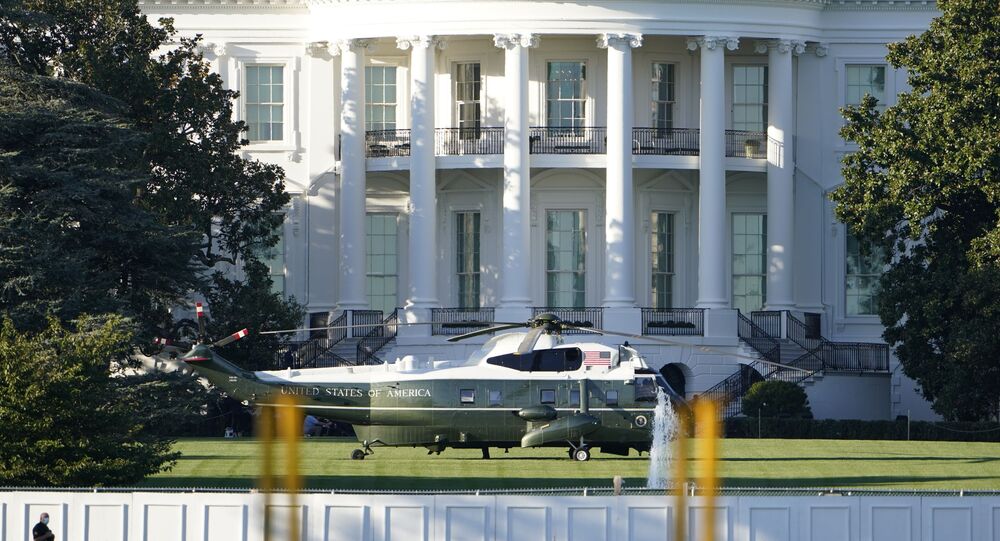 After testing positive on Friday for SARS-CoV-2, the virus that causes COVID-19, US President Donald Trump has made a "precautionary" trip to Walter Reed National Military Medical Center in Bethesda, Maryland.

White House Press Secretary Kelly McEnany announced on Friday that Trump would be "working at the presidential offices at Walter Reed for the next few days."

The president reportedly made the trip via Marine One, a specialized Sikorsky VH-3D Sea King helicopter.​

Trump even made a thumbs up gesture to journalists as he is taken to a military hospital out of abundance of caution pic.twitter.com/BpKCd2PNUW

Sputnik Image
Marine One lifts off from the White House to ferry US President Donald Trump to Walter Reed National Military Medical Center after being diagnosed with COVID-19 on October 2, 2020

​Early on Friday morning, 74-year-old Trump announced he and his wife, 50-year-old first lady Melania Trump, had tested positive for SARS-CoV-2 after Hope Hicks, a close adviser to the president, also tested positive.

According to his personal physician, Trump is suffering from fever and fatigue, while Melania is presenting very mild symptoms. The president is also taking an "antibody cocktail" along with several vitamin supplements.

The president's suite at Walter Reed is expansive, including a kitchen, secure conference room and its own intensive care unit (ICU). The White House chief of staff and Trump's physician also have their own accommodations on the campus. NBC reporter Scott MacFarlane noted the suites, however, are run by the White House, not the Department of Defense, meaning Walter Reed administrators do not have unrestricted access to them.

The sprawling medical facility, formerly known as Bethesda Naval Hospital, sits across the street from the National Institutes for Health (NIH) campus, the US' nerve center for research into the respiratory illness. The hospital has taken care of several US presidents over the years, including Ronald Reagan, who temporarily passed his powers of office to his vice president, George H.W. Bush, in 1985 before receiving surgery to remove polyps from his colon.

However, White House spokesperson Judd Deere made clear to reporters on Friday that Trump had "absolutely not" transferred his powers to Vice President Mike Pence during his stay at Walter Reed.

If Trump Survives, 'He Will Try to Use That Politically'

Jim Kavanagh, a political analyst and contributor to CounterPunch and ThePolemicist.net, told Radio Sputnik’s By Any Means Necessary on Friday that Trump’s diagnosis was “ironic,” given how “nonchalant” the president has been about COVID-19.

“My main takeaway is that we have this chaotic health care system, chaotic leadership, which even at its best has to deal with the fact that you have no real public health care system, and you have a chaotic mess of a health care system. And certainly, whatever one thinks of the virus in general, it is absolutely clear it is dangerous for people in Trump’s age group, in Trump’s physical condition. These are the people that need to be the most protected, and he, being among that group, he’s been one of the stupidest, to be as nonchalant as he’s been about it.”

“It’s very interesting to think about how this might proceed. In terms of his health, [UK Prime Minister] Boris Johnson had this, and he was very sick. I mean, he said it could’ve gone either way. Other leaders have had it. I think the Russian prime minister [Mikhail Mishustin] had it and didn’t fare so badly. As you say, they’re going to get the best care, they’re going to get the best tests, you know, whatever can be done can be done.”

“I doubt he’s going to die from it,” Kavanagh predicted. “If he survives that, which he’s probably going to do, he will try to use that politically on his own behalf and say ‘See, I survived, everybody can survive.”

“On the other hand, I think politically, just the fact that he’s come down with it after treating it as dismissively as he has is going to reflect bad, it’s going to work badly for him politically,” Kavanagh said. “I think this is a second big hit after his performance in the debates, and I don’t think he’s going to be able to turn it to his advantage.”