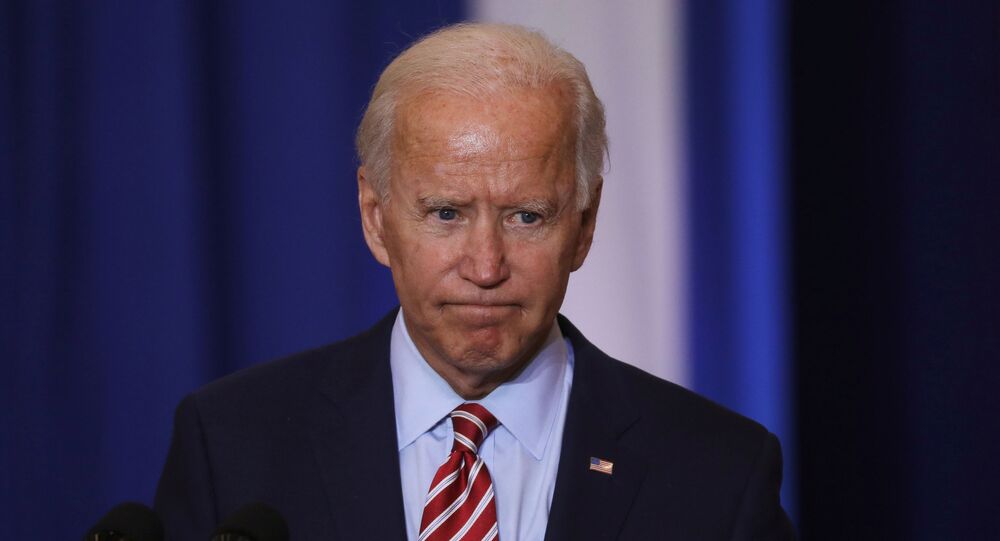 ‘A Bad Stunt’: Biden Takes Heat From Netizens After Playing ‘Despacito’ on Phone at Campaign Event

Democratic presidential nominee Joe Biden set out on a trip to Florida Tuesday seeking to woo Latino voters, as some pollsters have shown support for him and Donald Trump evenly divided in what is considered one of the nation's battleground states.

Democratic presidential nominee Joe Biden sought to consolidate support among the Latino voters in Florida as he set off on his first trip to what's considered one of the battleground states on Tuesday.

With polls showing a tight race in the state between the former vice president and Donald Trump, stops were scheduled in Tampa and Kissimmee, where he attended a Hispanic Heritage Month event.

As he kicked off the event in Kissimmee, Joe Biden headed towards the lectern and started playing a popular 2017 Spanish-language song on his phone, "Despacito," by Luis Fonsi, who had spoken ahead of him.

.@JoeBiden steps out and starts playing Despacito from his phone. pic.twitter.com/V5lkUBOoCb

​After bobbing his head for a while to the beat of the music, Biden added:

“I tell ya what, if I had the talent of any one of these people I'd be ... I'd be elected president by acclimation."

The footage was shared on Twitter by The Washington Examiner.

The move to engage the Hispanic community made netizens cringe, though.

Hey I get that it was just a bad stunt. Why not play the song over the PA while he walked out?

Geesh I’m a Biden supporter and this made me cringe. Who the F thought this was a good idea, whoever it was sure hope they’ve been fired.

Nah.... bro this was THE most out of touch I’ve seen pic.twitter.com/suOM88zP4S

Stay in your lane Joe. Only Trump can pull off a stunt like that. pic.twitter.com/M56ydjuDk3

​Many netizens wondered if the idea to play the song had been Biden’s own, or a campaign slip-up.

Who in the Biden campaign thought this was a good idea? 🤦🏾‍♂️

Wow he played descacito he can relate to me. I must go vote for him. 🤦‍♀️ I swear his handlers must think we’re stupid.

​Others on social media noted that Biden had just sought to thank the author of the song, who had introduced him at the event.

Just fyi, Biden didn't just walk on stage and played Despacito out of the blue.

He was introduced by Luis Fonsi, who said Despacito broke barriers for a new generation of Latin music and that Biden would encourage more creativity among latinx community.

He was just introduced by Luis Fonsi, who wrote and performed Despacito. There’s no issue in this situation, people just want to find dirt on him

But ... at least he’s trying to connect with another community. As opposed to scaring them into voting for him. Let’s not lose perspective on what our options are here.

Amid concerns he was losing momentum with the Latino voters in the state, Biden said at the Hispanic Heritage Month kickoff event in Kissimmee:

“More than any other time, the Hispanic community, Latino community holds in the palm of their hand the destiny of this country… You can decide the direction of this country.''

Biden added that his rival Donald Trump had “failed the Hispanic community time and time again”.

“Whether it's in his heinous act of separating children from their families at our border, or his repeated attacks on Dreamers, or his neglect of the people of Puerto Rico after Hurricane Maria, or his repeated failures to make sure essential workers have the personal protective equipment they need,'' said Biden.

As he spoke at the event on Tuesday night near Orlando, in a region with a significant Puerto Rican population, Biden also unveiled a plan focused on supporting Puerto Rico, with accelerated access to reconstruction funding, expanded health care, nutrition assistance and investments in Puerto Rican infrastructure after devastating hurricanes.

Earlier, Joe Biden’s campaign had admitted that he has some "work to do" with Latino voters, as an NBC-Marist poll released last week suggested that Latinos in the state were evenly divided between Biden and Trump.

Meanwhile, Democratic presidential nominee Joe Biden is six points ahead of President Donald Trump nationally, according to a new poll by The Hill-HarrisX.
Biden leads Trump by 45 per cent to 39 per cent, the results of the poll showed on Tuesday.