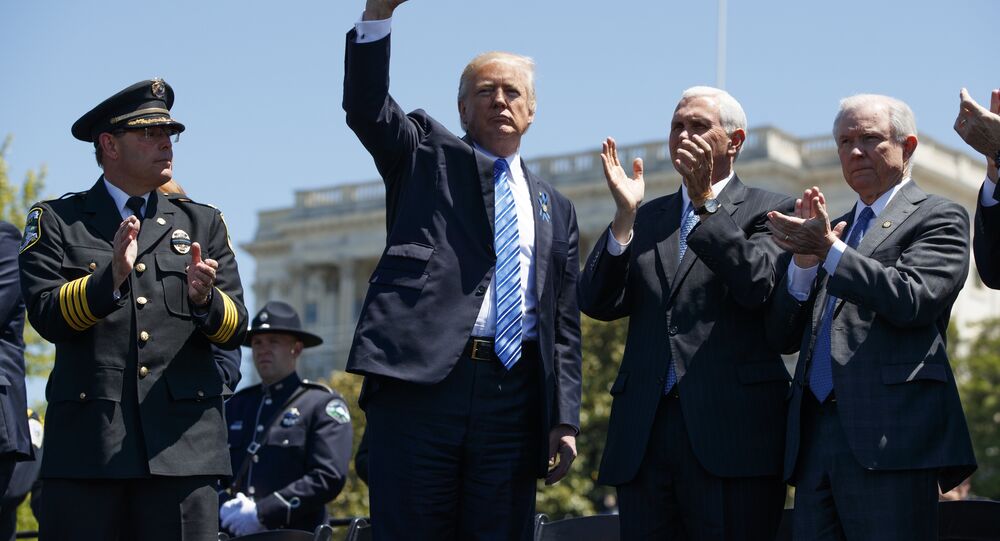 The world's largest organisation of sworn law enforcement officers, with more than 355,000 members in more than 2,100 lodges, has decided to support the current US president in the upcoming election after considering the two 2020 presidential candidates’ records and their answers to an FOP questionnaire.

The US Fraternal Order of Police has unanimously voted to endorse Donald J. Trump for the presidency of the United States.

"Public safety will undoubtedly be the main focus for voters in this year’s election. Look at what the national discourse has focused on for the last six months. President Trump has shown time after time that he supports our law enforcement officers and understands the issues our members face every day. The FOP is proud to endorse a candidate who calls for law and order across our nation. He has the full and enthusiastic support of the FOP", National FOP President Patrick Yoes said in a statement.

On behalf of the 355,000 members of the Fraternal Order of Police, we are proud to unanimously endorse @realDonaldTrump for President of the United States. #FOP4Trump pic.twitter.com/uAF6SWNRnA

🚨 Moments ago, National President @PYoes announced that the Fraternal Order of Police has unanimously voted to endorse @realDonaldTrump for President of the United States. #FOP4Trump pic.twitter.com/7gIiVMprwB

​On 3 September, the Southern States Police Benevolent Association, Inc. (SSPBA) announced that it endorses Donald Trump for president in the 2020 election.

Vice President Mike Pence told an SSPBA gathering at a "Cops for Trump" event at Raleigh-Durham International Airport in the US state of North Carolina that the Trump Administration knows "law enforcement is the solution, not the problem". He also repeated Trump's pledge that he would never defund any police force in the United States.

The decision comes amid social unrest in the US sparked by the police-involved deaths of African-American men, including George Floyd in Minnesota in May and a recent shooting in Wisconsin that left Jacob Blake paralysed.

During the months-long protests, Trump has been pitching himself as a law-and-order president, condemning the anti-police rhetoric.

On 2 September, US President Donald Trump visited Kenosha, Wisconsin and toured a section of the city damaged by rioting last week to promote his message of law and order. Trump pledged to provide $1 million to city law enforcement and $4 million in aid to the small businesses looted during the unrest. Another $42 million will go to support public safety state-wide, according to the US president.

Since May, many cities across the United States have been hit by a wave of civil rights protests, with people demanding that police departments be defunded following the death of George Floyd, an unarmed African-American male, in police custody in the city of Minneapolis.