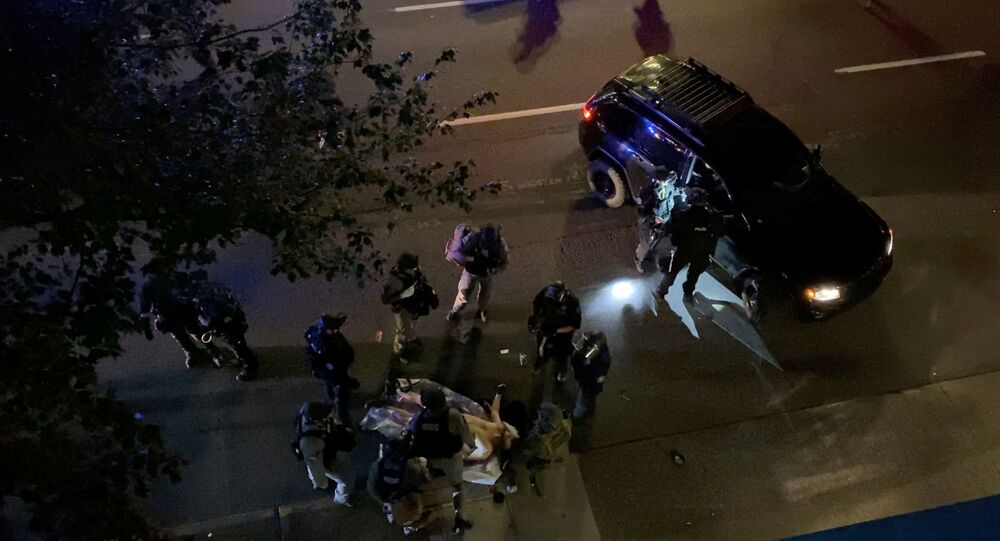 A man was shot dead in downtown Portland, Oregon, on Saturday night as violence erupted between supporters of President Donald Trump and Black Lives Matter protesters. The city has become a flashpoint for demonstrations against police brutality and racism since the death of African-American George Floyd in Minneapolis on 25 May.

Grainy footage of the Saturday night shooting that left one man dead in Portland, Oregon, has been posted on social media, with KOIN 6’s news anchor Dan Tilkin having reportedly spoken to the man who recorded it while streaming live.

Warning: The following video may be unsuitable for some viewers.

I spoke with the man who recorded the video of the shooting downtown Portland after pro-Trump & anti-Trump demonstrators clashed. "That's when I saw the tussle, not even a tussle, it was just yelling. And then the pepper, the bear mace came up, fired off, and then the gun shots." pic.twitter.com/7VHUcUn7nF

​According to Justin Dunlap, a man wearing white and a man wearing black were seemingly in an altercation with the man who died in the incident.

“The other two guys that were right in front of the guy who bear maced turned around and took off running. But I have no idea who shot, I couldn’t see it,” Dunlap said, according to the news anchor.

The man who recorded the footage added that the man who was shot turned and fell dead, on the ground, while the two others ran away.

After that, someone sprayed mace while someone soon after pulled out a gun.

The crews heard shots fired, then a wounded man was seen on the ground and the suspect took off running, reports Eminetra.

Portland police confirmed just before 9:30 p.m. that the victim, who was shot in the chest, had died.
They have not yet identified the shooter or the victim.

"We are working diligently to find and apprehend the individual or individuals responsible," he said.

The shooting came as protests against police brutality and systemic racism continue to sweep Portland, as well as other American cities, following the in-custody death of black former convict George Floyd in Minneapolis on 25 May.

Portland police tweeted earlier in the evening that there had been “instances of violence between demonstrators and counter-demonstrators”, as a pro-Trump vehicle rally took place near Clackamas Town Center, reaching Portland on Saturday evening. Footage showed four-wheel-drive trucks driving through intersections filled with protesters.

A political rally is caravanning throughout downtown Portland. There have been some instances of violence between demonstrators and counterdemonstrators. Officers have intervened and in some cases made arrests.

​It is not clear whether the shooting is directly connected to the rival protests.