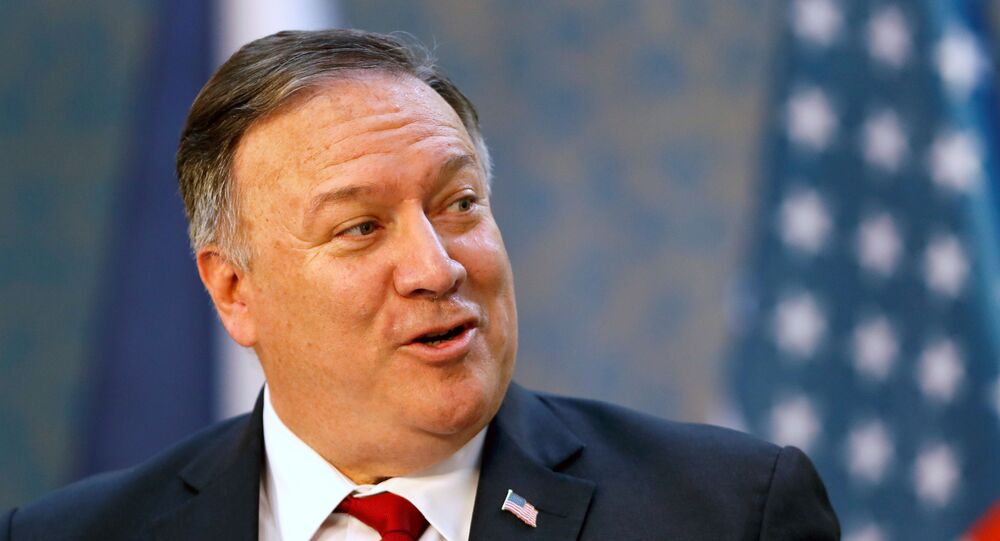 The US has been fruitlessly trying to force the UN Security Council to reinstate all sanctions against Iran that were previously lifted under the Joint Comprehensive Plan of Action. However, ironically, Washington's decision to pull out of the JCPOA in 2018 stripped it of the right to invoke these "snapback" sanctions for other UNSC members.

As scientists around the world are still arguing about the possibility of visiting and studying alternate or parallel universes, US Secretary of State Mike Pompeo apparently lives in one, according to a mocking Twitter post by Iran's Foreign Ministry spokesman Saeed Khatibzadeh. The spokesperson commented on Pompeo's recent claim that the so-called "snapback" sanctions against Iran would inevitably come into effect on 20 September, noting that when it comes to the reinstatement of sanctions, the clock "is ticking just in Pompeo's parallel alternate universe".

If any member of the @UN Security Council introduces a resolution to continue sanctions relief, the U.S. will oppose it. If no resolution is introduced, the sanctions on Iran will still return on September 20. That’s how UNSCR 2231 works. pic.twitter.com/KK7tyq0tJP

Khatibzadeh reminded the secretary of state about the US' recent fiasco at the UN Security Council after members declined Washington's bid to initiate the "snapback" sanctions mechanism, citing the lack of the country's authority to set it in motion.

"Thirteen members, including President of the UNSC have declared that America has no legal standing in the first place to recourse to 2231, as it's not a JCPOA participant", Iran's Foreign Ministry spokesperson said.

Failure of US Bid at UNSC

Last week, Pompeo "notified" the UN Security Council that the US would be triggering the "snapback" sanctions mechanism, which oversees the reinstatement of international sanctions against Iran and prolongs the embargo on weapons sales. The mechanism is a part of the Joint Comprehensive Plan of Action (JCPOA, also known as the Iran nuclear deal) that was signed by the US, Russia, China, and a group of European countries in 2015. The mechanism is supposed to be invoked should Tehran violate the provisions of the nuclear deal and one of the members of the accord submit a complaint about it.

The one-sided nuclear deal didn’t bring security for America, stability in the Middle East, or a change in the regime’s behavior – it never will. Re-establishing the @UN Arms Embargo on Iran puts pressure Iran to behave like a normal country and come back to the bargaining table. pic.twitter.com/6FRWZUAODj

Trump's administration has been opposed to the Iran nuclear from the start and Washington withdrew from the JCPOA in 2018 after Tehran refused to limit its missile programme, which was never a part of the accord. Ironically, this withdrawal currently prevents the US from triggering the "snapback" mechanism as other members of the UNSC have indicated that Washington is no longer a party to the nuclear deal and thus cannot prevent the lifting of a weapons embargo and re-introduce international sanctions against Iran.

Pompeo disagrees with this interpretation, however, and recently claimed that in order to enact international sanctions relief, UNSC members must vote for a respective resolution, which the top diplomat has vowed to block. At the same time, the remaining signatories to the JCPOA may ignore Washington, as the point regulating a resolution to lift sanctions is also a part of the nuclear deal, which is therefore beyond the US ability to control.

Trump: US to Restore All ‘Snapback’ Sanctions on Iran

US Snapback From Humiliation

US Has No Right to Request Snapback of UN Sanctions on Iran, Russia and China Say