© REUTERS / TOM BRENNER
Subscribe
Ilya Tsukanov
All materialsWrite to the author
On Thursday, 13 of the United Nations Security Council 15 members expressed opposition to a US push to trigger the so-called snapback sanctions provision to the 2015 Iran nuclear deal, pointing out that Washington is no longer a party to the agreement.

Iranian Foreign Minister Mohammad Javad Zarif has posted a compilation video of senior Trump administration officials including the president himself outlining why the US can have no say in deciding whether the United Nations introduces crushing ‘snapback sanctions’ against Tehran.

In their own words: pic.twitter.com/fFNjWj5xQa

The clip starts with Donald Trump announcing the US withdrawal from the Joint Comprehensive Plan of Action (JCPOA) nuclear deal in May 2018, and follows up with excerpts from remarks by Secretary of State Mike Pompeo, former National Security Advisor John Bolton, and former State Department special envoy for Iran Brian Hook explaining why the US hadn’t tried to use the snapback mechanism.

In a 2018 briefing cited in the video, Bolton says Washington can’t use the mechanism “because we’re out of the deal.” At a 2019 event, Hook tells reporters that “on snapback we are no longer in the deal, and so, the parties that are in the deal will have to make their decisions.”

Near the end of the video, Zarif says that “after officially and explicitly ceasing its participation in the JCPOA at the highest level, and having violated each and every one of its obligations under the JCPOA and Resolution 2231 [which endorses the nuclear deal at the UN] the United States cannot arrogate to itself any right under that Resolution.”

The video concludes with Pompeo recalling his time as director of the CIA, and quipping “We lied, we cheated, we stole.”

The US announced that it would try to trigger the UN snapback mechanism against Iran in mid-August. Russia and China, which ultimately ended up voting against the US resolution on Thursday, dismissed the US campaign, with Russian Deputy Foreign Minister Sergei Ryabkov calling it “absurd.”

On Thursday, after all but one of its allies abstained from the vote, and Russia and China voted against the US resolution, Pompeo accused Washington’s European allies of publicly choosing to “side with ayatollahs” instead of supporting their American partners. Later, he added that the US would use every tool at its disposal to prevent Russia and China from “violating” sanctions against Iran once the UN arms embargo expires in October.

France, Germany and the United Kingdom released a joint statement Thursday justifying their abstention, explaining that “the US ceased to be a participant of the JCPOA following their withdrawal from the deal on May 8, 2018,” and was hence not in a position to demand snapback sanctions. 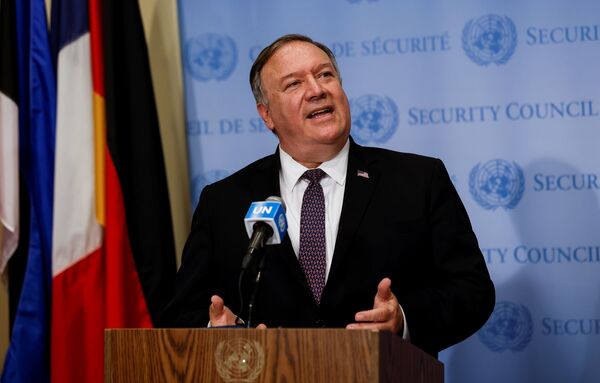 The JCPOA’s snapback mechanism was included in the 2015 nuclear deal, and designed to be triggered in the event that Tehran stopped fulfilling its obligations under the agreement not to pursue nuclear weapons. The US launched its snapback appeal on the basis of Iran’s recent nuclear enrichment activities, which it said were a violation of the agreement.

Iran did begin moving to increase its enriched uranium stockpiles after it alleged that the JCPOA’s European partners failed to live up to their commitment to protect Iran’s economy from crushing US financial and energy sanctions. However, enrichment levels, estimated to be have reached about 4.5 percent, remain far below the estimated 80-90 percent purity required to build a nuclear bomb. Iran has maintained throughout that it has no intention of pursuing nuclear weapons, or weapons of mass destruction of any kind. The Islamic Republic destroyed its stocks of chemical weapons in the mid-1990s before ratifying the Chemical Weapons Convention in 1997, and has since urged Washington to do the same.

netman
23 August 2020, 18:36 GMT15
000000
The US takes Iran's decency and respect for multilateralism for granted. There is a limit to everything. Iran must now show the middle finger to these Pharisee streetwalkers.