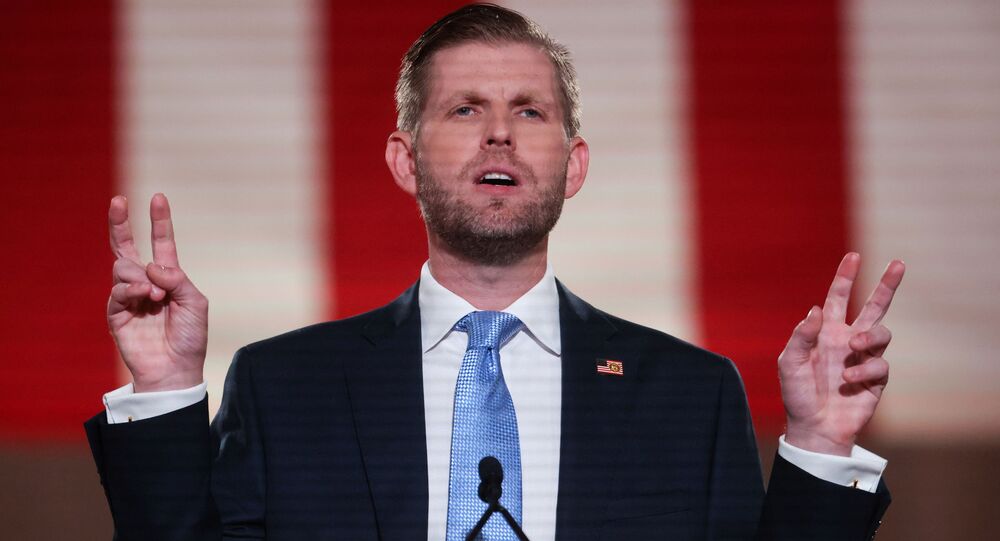 On Tuesday, Eric Trump delivered a speech at second night of the 2020 Republican National Convention (RNC), in which his father, sitting US President Donald Trump, is set to be officially re-nominated for the presidential election on 3 November.

Eric Trump, US President Donald Trump’s third child and second son, praised and cheered on his father on Tuesday during his speech at the 2020 Republican National Convention and made a personal appeal to POTUS.

During the whole speech, Eric spoke of his father’s achievements such as tax cuts, the killing of high-class terrorists, including Daesh* terrorist group founder and leader Abu Bakr al-Baghdadi, in addition to boosting the US economy prior to the coronavirus (COVID-19) pandemic. In addition, he rallied against Democrats and “communist China”.

At the end of the speech, the businessman made a reference to his late uncle Robert Trump, who passed away earlier this month and was honoured at a White House ceremony last week, before he took a chance to directly ask the president to allow him to work “alongside” him at the White House if he wins a second term in order to “make Uncle Robert very proud”.

“In closing, I’d like to speak directly to my father. I miss working alongside you every single day, but I’m damn proud to be on the front lines of this fight. I am proud of what you are doing for this country,” Eric said. “Dad, let’s make Uncle Robert proud this week. Let’s go get another 4 years.”