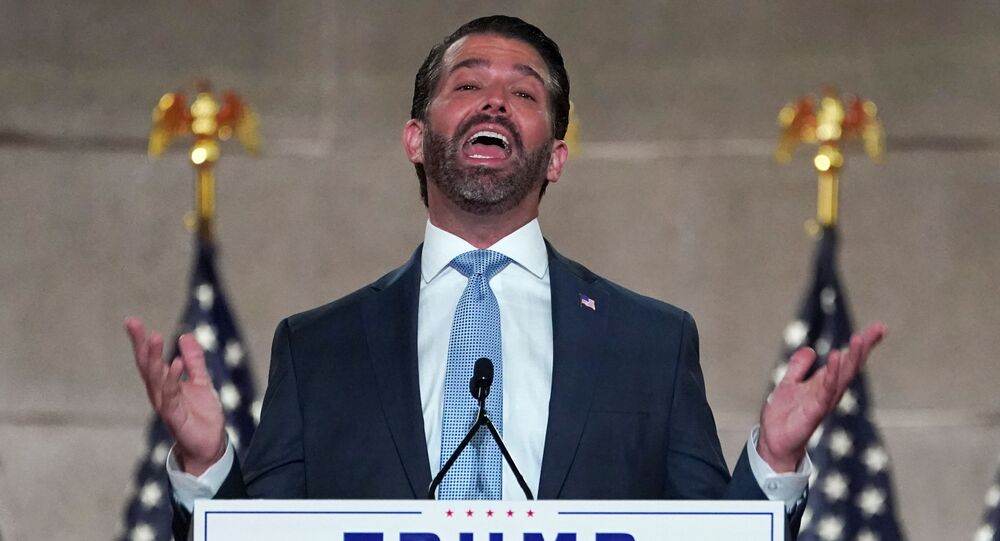 Slamming Democratic presidential nominee Joe Biden appears to be the main point in the ongoing Republican National Convention, where the incumbent President Donald Trump was re-nominated as GOP presidential candidate for the 2020 November election.

Donald Trump Jr., the US president's eldest son, lashed out at Democratic presidential candidate Joe Biden during an enthusiastic speech at the Republican National Convention, calling him "Beijing Biden" and the "Loch Ness monster of swamp".

"After eight years of Obama and Biden's slow growth, Trump's policies have been like rocket fuel to the economy and especially the middle-class. Biden has promised to take that money back out of your pocket and keep it in the swamp. But that makes sense, considering Joe Biden is basically the Loch Ness monster of the swamp", Trump Jr said.

Dubbing the Democratic presidential nominee as "Beijing Biden", Trump Jr mocked the former as a candidate favored by the Chinese Communist party.

"Beijing Biden is so weak on China that the intelligence community recently assessed that the Chinese Communist Party favors Biden. They know he'll weaken us both economically and on the world stage", he said in his speech.

Trump Jr's speech was seen by some Twitter users as too enthusiastic and "over hyped", as many suggested that he was "crying" and "high on something".

Junior was clearly coked up out of his mind. People are laughing AT him, not with him. pic.twitter.com/neiwLKiO52

Bruh...look at Donald Trump Jr’s eyes! He’s high on something, and it’s not weed. Those are coke eyes. #RepublicanNationalConvention pic.twitter.com/O1e5LdVF7y

​Some criticized his current girlfriend, Kimberly Guilfoyle, for the same reason, alleging she was giving her speech while "high" or under the influence of something.

​The Lincoln Project, a Republican anti-Trump political action committee, posted a video that ridiculed and mocked the performance by the president's eldest son.

​Trump Jr gave a speech during the Republican National Convention, the presidential nominating event taking place from 24 to 27 August.

His father has been nominated as the GOP candidate for the 2020 November election, along with current vice president Mike Pence. The president is expected to close the convention with an acceptance speech on Thursday.