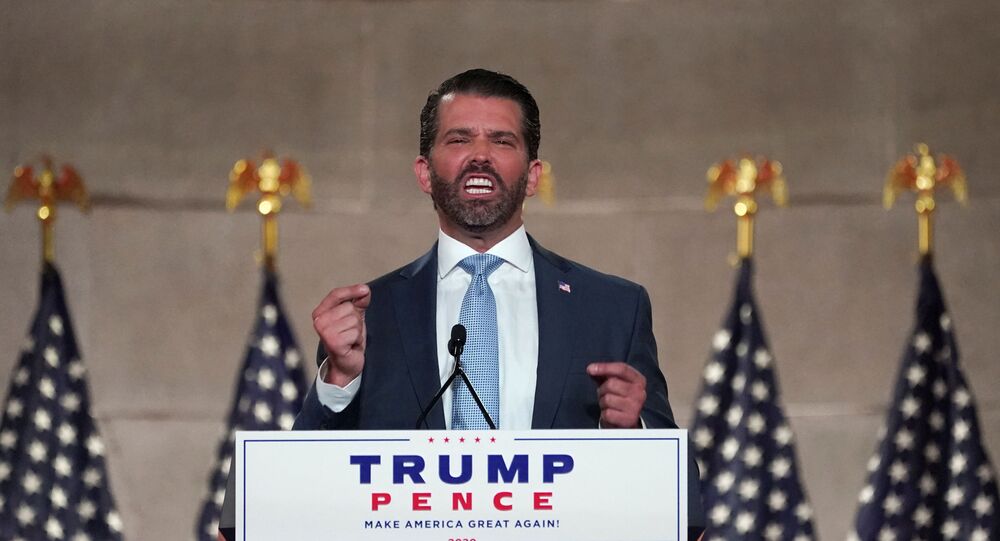 A speech by Donald Trump Jr., given during the Republican National Convention, appeared for some to be so fiercely emotional that it was immediately wondered whether the US president's son had taken drugs before speaking.

Donald Trump Jr. responded to a wave of allegations on social media that he was "high on something" during his performance at the ongoing Republican National Convention.

Delivering his speech, the president's son spent most of his allotted time attacking Democratic presidential candidate Joe Biden, describing him as a "Loch Ness monster of swamp" and "Beijing Biden".

In watching the speech, some netizens saw Trump Jr as "over hyped" and "almost crying", and they subsequently joked and made memes based on the suggestions that he was high on drugs.

One of the memes triggered a response from Trump Jr, who wrote that the meme maker "must have me confused with Hunter Biden", referring to one of the sons of Democratic presidential candidate Joe Biden, who is known to have struggled with drug addiction.

You must have me confused with Hunter Biden. https://t.co/dUeshfmYs0

​Trump Jr's kickback caused a wave of additional comment, with some praising the response, and others ramping up the squabble. A Twitter account parodying Joe Biden appeared in the thread, continuing to mock Biden's son.

Why does Hunter keep spilling flour on my coffee table? pic.twitter.com/GjwqJrqrNW

​Other users fended Trump Jr off, noting that the family resemblance would not let anyone confuse him with a Biden and taking verbal shots at the Trumps.

Nobody could confuse you for Hunter. pic.twitter.com/c1VqTTx15T

Nice try Donny Jr, but no cocaine. Where's Eric? I hear the law wants to speak with him....

​Some joked about both sides of the squabble, immediately coming up with a meme.

Already got to use this a couple times, probably will get to use it a few more. pic.twitter.com/Uw2wylS6nK

​The barb-trading comes after the Republican National Convention kicked off on 24 August, hosting Donald Trump Jr, Nikki Haley, Charley Kirk and other speakers, while also nominating US President Donald Trump as the GOP presidential candidate for 2020, alongside his vice president, Mike Pence. Trump is expected to deliver an acceptance speech for the GOP nomination on Thursday, the convention's final night.