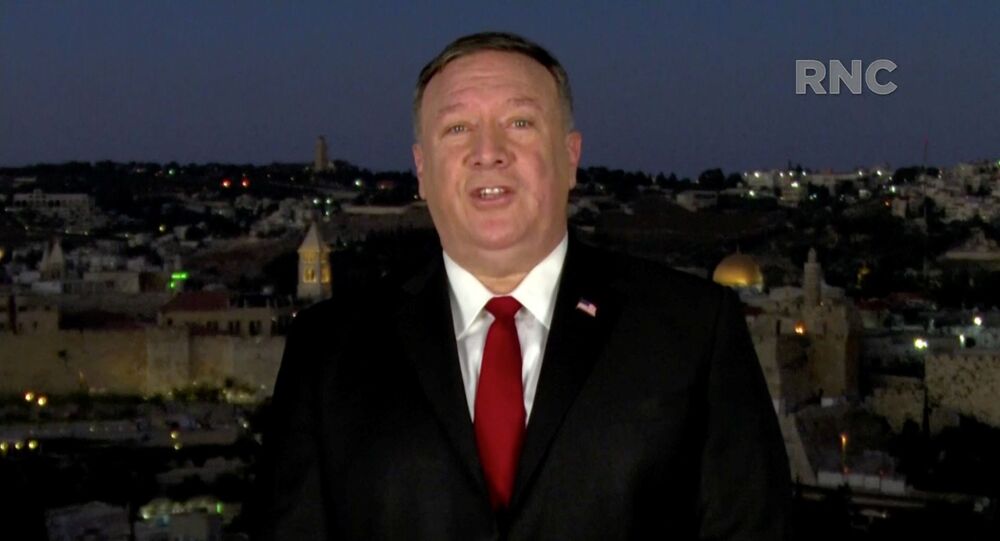 US State Secretary Mike Pompeo faces an investigation by the US House Oversight and Investigations Subcommittee after its chairman, Joaquin Castro, initiated a probe of the Trump appointee for delivering a speech at the Republican National Convention, as a possible violation of the law.

US Secretary of State Mike Pompeo delivered a speech on the second day of the Republican National Convention (RNC), speaking via a prerecorded video from Jerusalem. During his remarks, Pompeo focused on security issues and foreign policy, and praised US President Donald Trump's actions regarding North Korea, China, Iran, Russia and others.

"Delivering on this duty to keep us safe and our freedoms intact, this president has led bold initiatives in nearly every corner of the world," Pompeo, a Trump appointee, said, touting POTUS as someone who aimed to “end war rather than start one”.

The Secretary of State touched on various Trump policies regarding different countries, again attacking China. Pompeo slammed what he called Beijing's "predatory aggression", reiterating the traditional blame on China for the spread of COVID-19.

He also referred to Trump's North Korea policy, asserting that "the president lowered the temperature and, against all odds, got North Korean leadership to the table".

"No nuclear tests, no long range missile tests and Americans held captive in North Korea came home to their families as did the precious remains of scores of our heroes who fought in Korea,” he stated during his diplomatic visit to Israel to meet with the Tel Aviv prime minister.

Despite Trump brought Kim Jong Un to negotiation, their three meetings did not end North Korea's nuclear program, as Pyongyang said it was not interested in further talks with the US.

Pompeo praised Trump's Middle East actions, highlighting a territorial defeat of Daesh in Iraq and the assassination of the top Iranian general, Qasem Soleimani, while claiming that the latter was responsible for the "murder and maiming of hundreds of American soldiers and thousands of Christians across the Middle East".

Soleimani was the target in an extra-judicial killing by a US-conducted drone strike in January, resulting in strong condemnation and retaliation from Iran, and ramping up tensions between the two countries that first leapt after POTUS unilaterally exited the 2015 Joint Comprehensive Plan of Action in May 2018, also known as nuclear deal with Iran.

Pompeo echoed earlier praises of a Trump decision to move the US embassy in Israel from Tel Aviv to Jerusalem, and recalled a recent treaty offer between the Jewish state and the United Arab Emirates that envisaged the possible normalization of relations between two countries.

The Israel-UAE deal drew controversial reaction worldwide, with many countries praising the agreement as a step toward peace in the Middle East, while others, including the Palestinian National Authority, vehemently condemning the move, insisting that it violates the rights of the Palestinian people.

Pompeo's prerecorded talk was played at the RNC, despite concerns that he, as a political appointee, cannot deliver a speech at a political event - based on the Hatch Act. According to CNN, Pompeo earlier warned diplomats in a cable that they "are subject to significant restrictions on their political activity" and told them not to engage in any partisan political activity, something that he has been shown to do on several occasions.

The Democratic chairman of the House Foreign Affairs Subcommittee on Oversight and Investigations launched an investigation into the speech over remarks possibly violating the law. Pompeo's speech also drew harsh condemnation among Democrats, who slammed the Trump appointee's prerecorded video address at the RNC as an "abuse of taxpayer dollars" that "undermines the critical work being done by the State Department".

Videos: Night One of RNC Enriched Internet With #Guilfoylechallenge