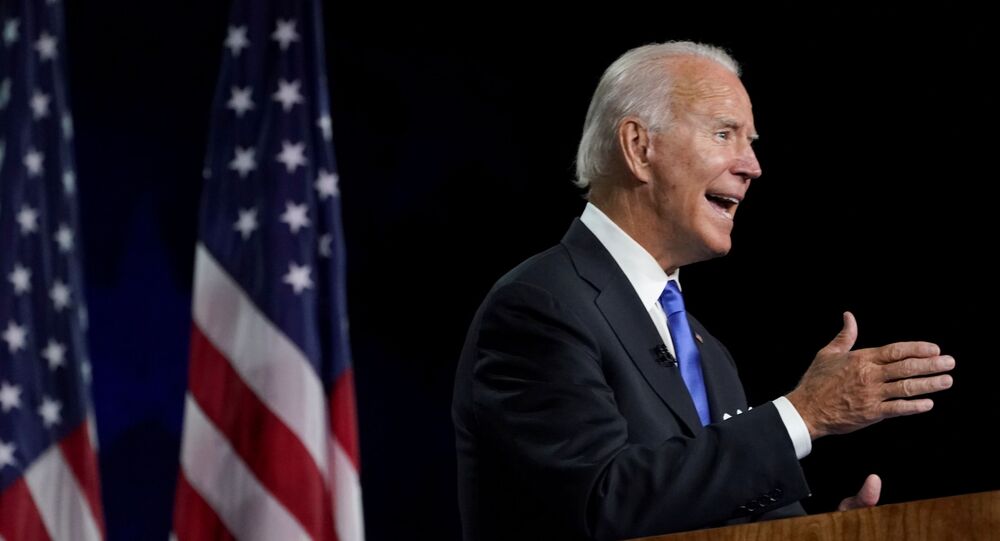 After the US Democratic Convention officially nominated former vice-president Joe Biden to take on Donald Trump in the November election, Trump is reportedly set to travel to Charlotte, North Carolina on Monday to attend in person as delegates to the Republican National Convention renominate him for US president.

US President Donald Trump has predicted that if his Democratic rival in the 2020 race for the White House wins, his country’s relationship with China will become quite different.

"If Biden is elected, China will own our country," said Trump, when interviewed for "The Next Revolution" by Fox News.

Underscoring that he was open to the possibility of entirely severing ties with China, the president added the warning:

"I don't want to set the world on fire right now… But there has been no country that has ripped us off more than China...We lose billions, hundreds of billions of dollars. We get nothing from China. Yes, we get some goods that we could produce ourselves….[but] we get nothing. All we do is lose money."

In a step back from the simmering trade war that has raged between Washington and Beijing over US accusations that the Asian country had long been manipulating its currency and “stealing” US trade secrets, Donald Trump signed a landmark trade deal with China in January.

However, the COVID-19 pandemic, which originated in the Chinese city of Wuhan, and the crippling economic fallout it generated on a global scale, resulted in Trump’s administration launching a new broadside against China, accusing it of lack of transparency over the true scale of the health crisis unleashed by the respiratory disease.

Currently, no new top-level trade talks are in the pipeline between the two sides, although they were said to be in contact regarding implementation of the deal’s first phase, according to a statement made by White House Chief of Staff Mark Meadows on 18 August.

Donald Trump has been highly critical of Beijing’s handling of the coronavirus pandemic, stressing that he didn’t want to talk to China at the moment.

Trump told host Steve Hilton that the deal was “no longer the same to me" and raised the possibility of a total “decoupling” from China.

"If they don't treat us right, I would certainly do that," said Trump with emphasis.

Before the coronavirus health crisis, said Trump, the US-China relationship was beginning to pick up pace.

"We were doing better than we've ever done with China and I was all set to rock 'N' roll… Then we got hit with this damn situation."

Donald Trump reaffirmed his own preparedness to pursue a tough stance towards China.

"If you look at what we've done with China, nobody's ever done (that) to China," he said.

At the same time, he suggested that his opponent Joe Biden was “owned by China”, as he pointed to warnings by US intelligence officials that Beijing was allegedly planning covert measures to meddle in the upcoming election on the former vice-president’s behalf.

"China owns Joe Biden. His son got a billion and a half dollars. His son with no experience, no brainpower, no anything, never did it, not only Ukraine, he got hundreds of thousands of dollars of money from Ukraine and the upfront payment and then with China he walks up with a billion and half dollars in fees. It's ridiculous," Trump told Fox News.

Last week, Director of National Intelligence John Ratcliffe told Fox News that China posed “a greater national security threat” to the United States “than any other nation”, as he warned of allegedly imminent threats that include “election influence and interference”.

China has repeatedly denied all accusations of unfair trade practices or not-transparent response to the pandemic. It also dismissed allegations of planned interference in the US presidential election.

Biden entered the convention with 82% of his backers “very strongly” behind him, which went up to 87%. https://t.co/5Q4jx1GyXa pic.twitter.com/TP633Kdfk1

​Polls taken in the immediate aftermath of the Democratic National Convention, which formally nominated Joe Biden to run in the 2020 elections are showing that the former Vice President might have solidified his advantage over Trump.

​A new CBS News/YouGov poll put Biden ahead by a 52 percent to 42 percent margin among likely voters.

Biden is also up 8 points in the net favourability rating, according to a new ABC News/Ipsos poll.

The average post-convention poll indicates Biden's net favourability is up by between 5 and 10 points.

Beijing Has 'No Intention or Interest' to Interfere in US Domestic Affairs, Chinese Embassy Says