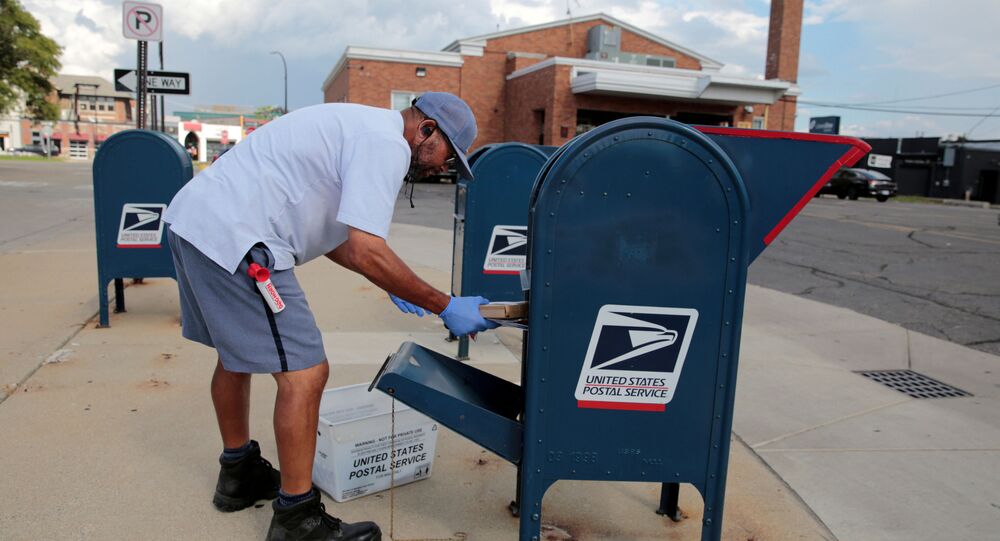 The changes that were recently made to the USPS and which sparked Democrat outrage have already been suspended, but Donald Trump's opponents still fear that this will not be enough to vote the incumbent president out.

US Democratic Party officials are rushing to come up with new election strategies for the November presidential election as they fear that mail-in voting might not give them victory, citing concerns over the US Postal Service's (USPS) ability to process all the votes in a timely manner. These concerns stem from mail-in voting being in greater demand than before due to the coronavirus pandemic and are also due to recent problems that the service has experienced amid cuts to its funding, which the Democrats blame on Trump.

One of their main suggestions for voters is to request their ballots early and send them in weeks ahead of election day in order to make sure that they arrive and are counted even if USPS services are disrupted. Should this plan fail, the Democrats suggest that their supporters drop off their ballots manually or vote in person, thus ignoring concerns about catching COVID-19.

"We are considering telling voters that if they haven’t mailed out their complete ballot by 15 October, don’t bother. Instead, vote in person or drop off the ballot. We want to make sure every vote counts", Joe Foster, the chairman of the Democratic Party in Montgomery County, said in an interview with Reuters.

A similar set of measures designed by Democrats to ensure that all of their supporters can cast their vote was described by Democratic Party officials and activists from Michigan, Florida, and North Carolina, Reuters said. Election officials in several states, including South Carolina, Florida, Virginia, Pennsylvania, are, in turn, working on expanding the geography of drop-off boxes, with some counties having only a few such sites and which are not ready for a massive influx of voters.

At the same time, USPS Postmaster General Louis DeJoy assured that the postal service will be able to handle any amount of stress related to the election, promising to mobilise reserves weeks before 3 November.

"The Postal Service is ready today to handle whatever volume of election mail it receives this fall", DeJoy said.

The official also announced that all of the recent changes to the USPS will be suspended until the end of the election. His remark, however, apparently did not impress the Democrats, who said the suspension of changes is not enough. They claimed that the damage has already been done and will allegedly cripple Democratic voters' ability to cast their ballots.

"The bigger issue will be with ballot tabulation in each state on Election Night. If many ballots are sent by mail, this process will inevitably be slower - especially since many states require only that ballots be postmarked, not received, by Election Day. In America's current very tense and polarized national climate, uncertainty about the winner in the days following the vote would be very bad for the country", Matthew Wilson, associate professor of political science at Southern Methodist University, said.

According to Wilson, it is likely that mail-in voting will expand over time in the United States, even once the pandemic is over.

"Many voters would like to avoid the lines that can sometimes be an annoying feature of Election Day. However, to expand it in a way that allows for public confidence in ballot integrity and electoral legitimacy, as well as for reasonably rapid tabulation, is a challenge -- and one best not addressed on the fly in a matter of weeks. It is very unfortunate that this dispute is falling into a familiar pattern, with Republicans painting Democrats' enthusiasm for mass ballot mail-outs as inviting "fraud," and Democrats painting Republican reticence as 'suppression'. It gives partisans on both sides a built-in excuse to contest the legitimacy of any close election loss".

US President Donald Trump has earlier repeatedly condemned the idea that most votes in 2020 should be cast by mail, insisting that it will lead to massive fraud on the side of the Democrats, resulting in the election being "rigged" against him. He made similar accusations against the idea of widespread use of "drop boxes", arguing that this might also lead to vote tampering and insisting that only absentee ballots are an acceptable and reliable way to vote for those not willing to do so in person.

Some states use “drop boxes” for the collection of Universal Mail-In Ballots. So who is going to “collect” the Ballots, and what might be done to them prior to tabulation? A Rigged Election? So bad for our Country. Only Absentee Ballots acceptable!

In line with his arguments, Trump slashed a $25 billion package to support the USPS, saying he doesn't want to fund a body that can be used to "steal" the election from him. The move sparked outrage from his Democratic opponents, who claimed that POTUS is trying to cripple the service so that voting by mail would become nearly impossible. Administration officials later tried to ease tensions by suggesting that some additional funding for the USPS is still possible.