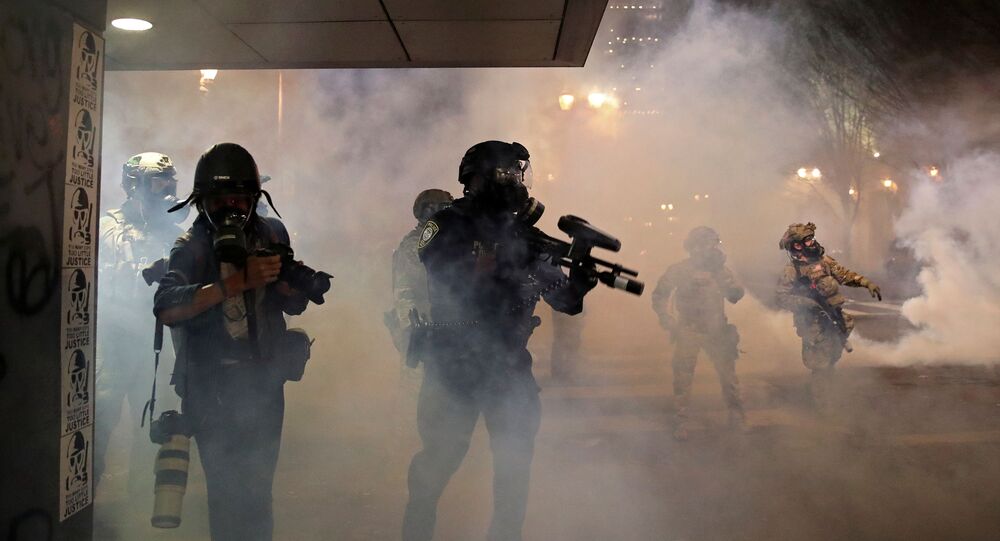 As civil unrest in Portland continues amid massive anti-racism protests spanning the United States, President Donald Trump has reportedly deployed 100 additional federal officers to the region as a means of quelling the protests.

The Sunday night protests in Portland were declared a riot by local police, who also claimed that participants demonstrated aggressive behavior, throwing explosives, rocks and bottles at the police officers.

Commissioner @JoAnnPDX and I are calling for an immediate meeting with Department of Homeland Security leadership on the ground in Portland and with Acting Secretary @DHS_Wolf to discuss a cease-fire and the removal of heightened federal forces from Portland.

​Wolf described the protests in Portland as different from "normal criminal activity" and street crime, like those in Chicago or Kansas City, recently tweeting that federal officers suffered 20 injuries over the past weekend.

​Earlier, Wolf urged city authorities to "join other responsible cities" and cooperate with federal agents, while Wheeler slammed Trump for sending the federal troops to Portland, pointing out that "militarised agents are terrorising the American people".

"Targeting and occupation of progressive cities is unacceptable, un-American and unconstitutional. Moreover, these federal agents are not trained in modern community policing, crowd control, or de-escalation strategies...[] We call on Congress to swiftly pass legislation to block the administration from sending unwanted and unidentified federal agents to our cities", Wheeler tweeted.

Portland saw some of the anti-racism and anti-police-brutality protests turn violent, as rioters damaged federal property, looted shops, and attacked police, causing federal agents to use force and tear gas.

At least 14 federal officers were injured during the weekend, according to a DHS statement, while 15 people were arrested for assaulting a federal officer and 3 others were detained for failure to comply with lawful orders and violating a no-fly zone with a drone.

In mid-July, Trump sent federal officers to Portland to "protect the federal property", particularly a courthouse that was earlier attacked by protesters and to quell the unrest, despite objections from the local authorities and residents of the city.