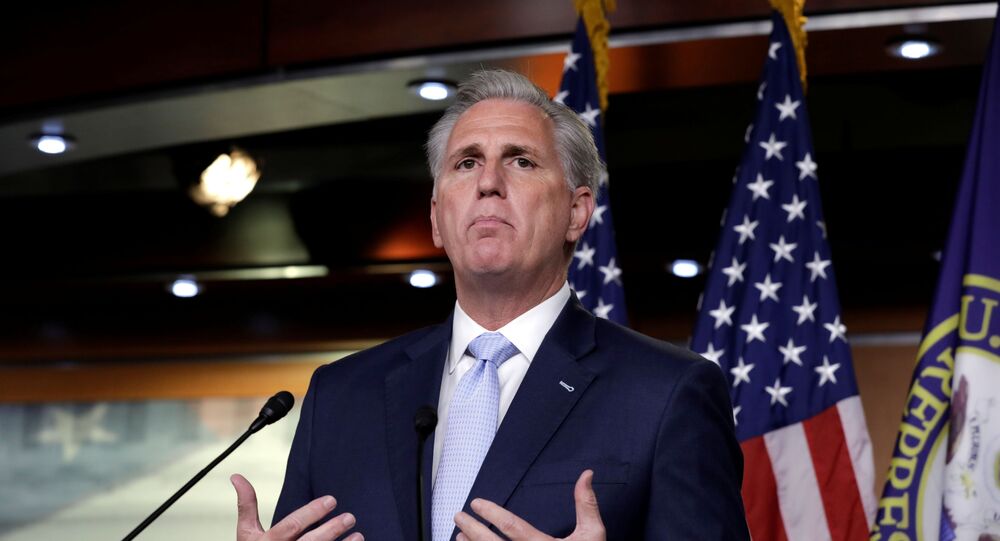 On Thursday, the UK's National Cyber Security Centre (NCSC) accused 'Russian hackers' of making attempts to hack into Western health institutions involved in coronavirus research and vaccine development - an accusation that Russia dismissed as "vague and contradictory", pointing at the lack of evidence.

The top GOP Leader in the US House of Representatives, Kevin McCarthy, accused Russia of "malicious actions" aimed at "weakening our pandemic response", announcing that he will introduce legislation "to ensure these Russian hackers are held accountable".

McCarthy was referring to recent allegations voiced by the UK National Cyber Security Centre (NCSC) and supported by the US and Canada claiming that Moscow is trying to hijack coronavirus vaccine research.

"Moscow's continued malicious actions to weaken our pandemic response must not go unchecked. In the coming days, I will be introducing legislation to ensure these Russian hackers are held accountable", McCarthy tweeted.

Moscow's continued malicious actions to weaken our pandemic response must not go unchecked. In the coming days, I will be introducing legislation to ensure these Russian hackers are held accountable. https://t.co/yTuFLanWVe

​Backed by no credible evidence, the accusations were rolled out on Thursday, with the NCSC claiming that a hacker group called APT29, also known as 'the Dukes' and 'Cozy Bear', were behind attempts to hack health institutions in the UK, US and Canada "with the intention of stealing information and intellectual property relating to the development and testing of COVID-19 vaccines".

Russia dismissed the allegations, slamming them as "unacceptable".

"We have no information on who could have hacked pharmaceutical companies and research centers in the UK. We can say only one thing, Russia has nothing to do with these attempts", Russian presidential spokesman Dmitry Peskov said.

"The statement is so vague and contradictory that it is almost impossible to understand it. If it's inappropriate to say, don't say so. If you say it, present the facts", she said.

This is not the first time Russia and mysterious "Russian hackers" have been accused of wrongdoings by representatives of Western security services and public figures. Mentioned in new allegations, the hacker group known as Cozy Bear that the UK claimed has ties with the Russian government, was earlier accused of and has been held responsible in the US for targeting the Democratic Party amid the 2016 US presidential election. Russia was accused of meddling in the election as well, something that Moscow has vehemently denied. In both cases no proof for any alleged misdeed has been found.

Fresh accusations against 'Russian hackers', this time for allegedly trying to steal information on a coronavirus vaccine, come as Moscow announced the final stages of a coronavirus vaccine and approved two Russian-made antiviral drugs, Remdesivir and Avifavir, to be an effective treatment against COVID-19.

Developments in Oxford Vaccine Officially Shared With Russia, No Need to ‘Steal’ Them – RDIF Head