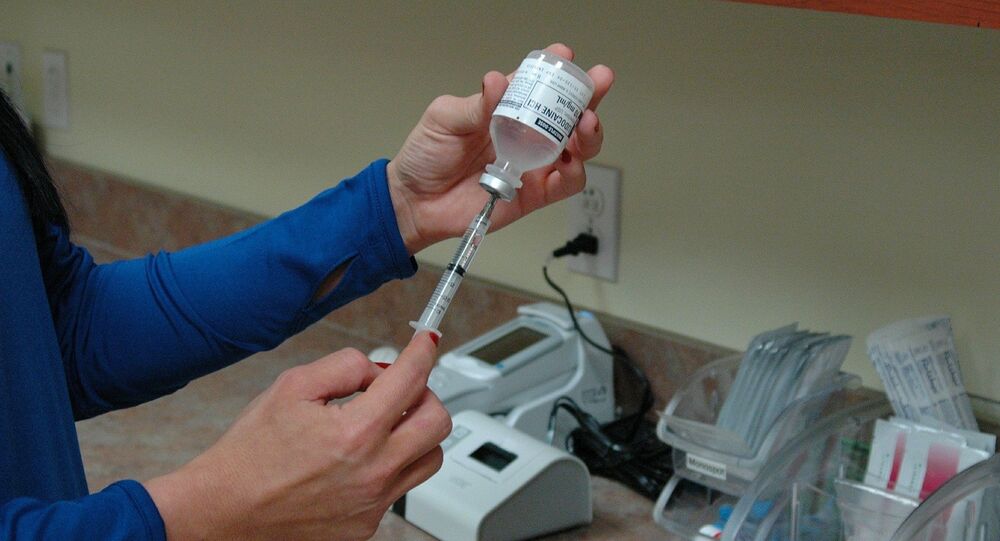 Last month, the head of the UK spy agency GCHQ said that Britain’s intelligence agents had detected multiple cyberattacks on the country’s health infrastructure this past spring, linking the attacks to attempts to steal sensitive data about a possible COVID-19 vaccine.

Russia rejects the United Kingdom's accusations of having a role in any cyberattacks on Western institutions involved in coronavirus vaccine research, presidential spokesman Dmitry Peskov has said.

"We find such accusations unacceptable," the spokesman stressed, speaking to reporters on Thursday.

"We have no information on who could have hacked pharmaceutical companies and research centers in the UK. We can say only one thing, Russia has nothing to do with these attempts," he added.

Earlier in the day, the UK National Cyber Security Centre (NCSC) accused Russia-linked cyber actors of attempts to steal data on the development of an anti-coronavirus vaccine, suggesting that a group called APT29, also known as "the Dukes" or "Cozy Bear", was behind the hacking attempt, and was "almost certainly" tied to Russia's state intelligence services.

The Russian Embassy in London dismissed London's claims as "propaganda," an official telling Sputnik that when it comes to cyber threats, Russia has been offering to engage in professional dialogue between cybersecurity experts of both countries "for several years now."

"British authorities are aware of the existence of the Russian National Computer Incident Coordination Centre specially created for this purpose. However, we have not received any requests in connection with the specified incidents through official channels. Therefore, what we are dealing with is not genuine concern about computer security, but a purely propagandistic step," the Embassy official said.

"It is completely unacceptable that the Russian Intelligence Services are targeting those working to combat the coronavirus pandemic," Raab said, as quoted by Reuters.

"The UK will continue to counter those conducting such cyber attacks, and work with our allies to hold perpetrators to account," the minister added, according to the agency.

Later in the day, Health Secretary Matt Hancock declined to share any details on Russia's alleged vaccine-related hack attack, saying only that he could assure lawmakers "that the National Cyber Security Center is taking this very seriously."

The NCSC's allegations come within a week of Moscow announcing that the testing of one of its COVID-19 vaccines had entered its final stages, with two other promising vaccines in the pipeline, one set for testing in August.

Russia was one of the first countries in the world to begin studying the novel coronavirus, with research starting in January at labs in Moscow, St. Petersburg, Novosibirsk and elsewhere, before any cases were even reported on Russian territory. In March, researchers from the Smorodintsev Research Institute of Influenza in St. Petersburg successfully sequenced the COVID-19 genome.

In addition, the VECTOR State Research Center of Virology and Biotechnology in Novosibirsk quickly created a highly accurate test kit and began its own vaccine research, as Russian Academy of Sciences-affiliated researchers proposed three separate antiviral therapies they said may be suitable for treating patients affected by the virus.

© REUTERS / ANTON VAGANOV
Developments in Oxford Vaccine Officially Shared With Russia, No Need to ‘Steal’ Them – RDIF Head
This week, Kirill Dmitriev, CEO of the Russian Direct Investment Fund, pointed to the success of Remdesivir and Avifavir, two Russian-made antivirals based on a modified Japanese flu medication, in becoming "the first two regulatory approved anti-COVID antivirals in the world." Avifavir started to be exported to Belarus and Kazakhstan earlier this month, and multiple other countries in Latin America, the Middle East and the former Soviet space have expressed interest in the drug.

By comparison, the UK's own coronavirus research has been slower, with the first phase of human testing for one promising vaccine starting at Imperial College London in late June after animal testing determined that the vaccine was safe for further studies. Oxford University's Jenner Institute is expected to release data on trial results for its own prospective vaccine next week, although human challenge trials in the UK aren't expected to start for "months."

"These actions strain common sense, just as the phoney story of Russians paying the Taliban bounty to kill Americans...two weeks ago strained common sense," says Gilbert Doctorow, an independent Brussels-based political analyst. "There is no logic to a Russian intelligence unit spying on Western Covid developers when Russia itself is possibly more advanced in testing and producing a Covid-19 vaccine than any Western laboratory."

Calling the allegations "so utterly outrageous that no detailed answer is required or would do any good," Doctorow simply recalled that the same "Cozy Bear" unit named by the NCSC Thursday was accused of breaking into Democratic Party computers during the 2016 election "to purloin letters embarrassing to the campaign of Hillary Clinton."

"Those charges going back to 2016 were never proven, and what we have been told today also will not be proven," the observer suggested.

Andy Vermaut, a prominent Belgium-based human rights activist, echoed this sentiment, recalling that "the first trials for a vaccine started much earlier in Russia" than they had in the UK.

"The accusations against Russia are certainly not well-founded. Everything that goes wrong in the West is 'Russia's fault', the monotonous tune is really starting to get boring. Russia has no need to steal business or medical secrets, apparently some have a problem with the Russian leadership. It's politics to make the others look stupid. But even this shouldn't be a reason to make false accusations. The problem with such fake news, is that it will lead a life of its own and can even have enormous consequences for a country," Vermaut warned.

Fortunately, the Vermaut suggested, "more and more Europeans are aware" of European myth-making about the "Russian threat" and how it's used "to give NATO another raison d'etre."

The UK's fresh 'Russian cyberhacking' allegations, combined with the government's claims earlier in the day that the Kremlin had attempted to meddle in the 2019 general election by stealing and then dumping sensitive documents related to a UK-US trade pact on Reddit, may be part of a coordinated campaign aimed at derailing Moscow's summit diplomacy at the United Nations, says Tiberio Graziani, head of the Italy-based Vision & Global Trends International Institute for Global Analyses.

"I have the feeling that these allegations constitute part of a pre-established concerted plan against the Russian Federation rather than being an accidental claim aimed at defending British and US national interests," Graziani explained in an interview.

Pointing to the Reddit documents' potential embarrassment for the Johnson government, given that they allegedly shed light on No 10's plans to allow US pharmaceutical giants to access the UK market, Graziani suggested that in this context, the fresh 'Russian meddling claims' concern "not only the international dimension, but also the domestic one," to distract attention from the government's own actions vis-a-vis the British public.

Russia and the UK have taken varying approaches to tackling the coronavirus crisis, with Moscow moving to follow World Health Organization recommendations while London initially flirted with a controversial 'herd immunity' approach before joining most of the rest of the world in instituting lockdowns and other restrictions. With an estimated 159.5 tests per 1,000 people, Russia's coronavirus testing compares favourably with the UK's 105.9 tests per 1,000 people, and is one of the most intensive testing regimens in the world.

To date, Russia has reported a total of roughly 751,600 cases, with over 523,000 recoveries and 11,920 deaths. The UK has recorded roughly 294,450 cases and 45,138 fatalities. The UK has not reported its total recovery rate. Russia's death rate is among the lowest in countries experiencing large numbers of cases, and where extensive data is available. The UK's fatalities surpassed Italy in May to become the highest in Europe, prompting medical professionals to demand a public inquiry.