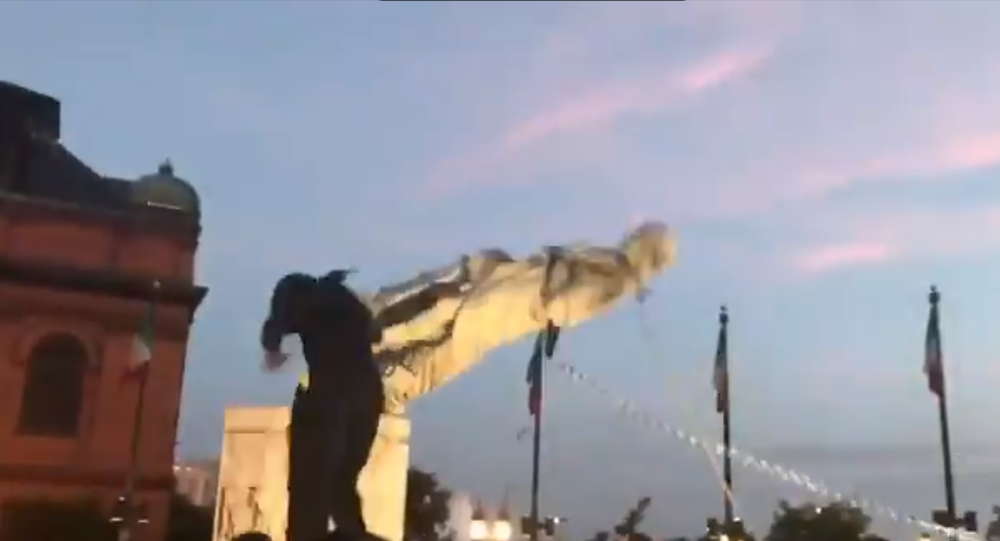 The toppling of the monument falls in line with an ongoing series of acts of vandalism and protest targeting statues of historical Confederate figures committed amid a massive movement against racial injustice currently spanning the United States.

A Christopher Columbus monument has been toppled by a group of protesters in the Little Italy neighborhood of Baltimore, in the US state of Maryland, on the evening of 4 July. The group used ropes to pull down the statue before tossing it into Baltimore's Inner Harbor.

Video of the incident, shared in social media, revealed a group of violent protesters shouting while removing the monument from its base using ropes.

A statue of Christopher Columbus was destroyed by a group of rioters today in Little Italy, Baltimore pic.twitter.com/CvFawq6Zme

​The marble statue, one of three Columbus monuments in Baltimore, was dedicated in 1984, honoring the legacy of the 15th century Italian explorer, known as a sea captain who discovered America for Spain.

As the nation-wide movement against racial injustice and police brutality gains ground in the United States, the legacy of Columbus has resulted in the figure now being denounced by many over his - and his sponsors - 'enslavement' of native peoples in the region.

The statue toppling in Baltimore echoes a series of violent acts against other historical monuments, such as defacing a George Washington statue in Manhattan and pulling down a Thomas Jefferson statue, alongside that of many Confederate leaders.

Amid the ongoing protests, US President Donald Trump signed an executive order envisaging up to ten years imprisonment for those who are found guilty of violence and vandalism toward statues.