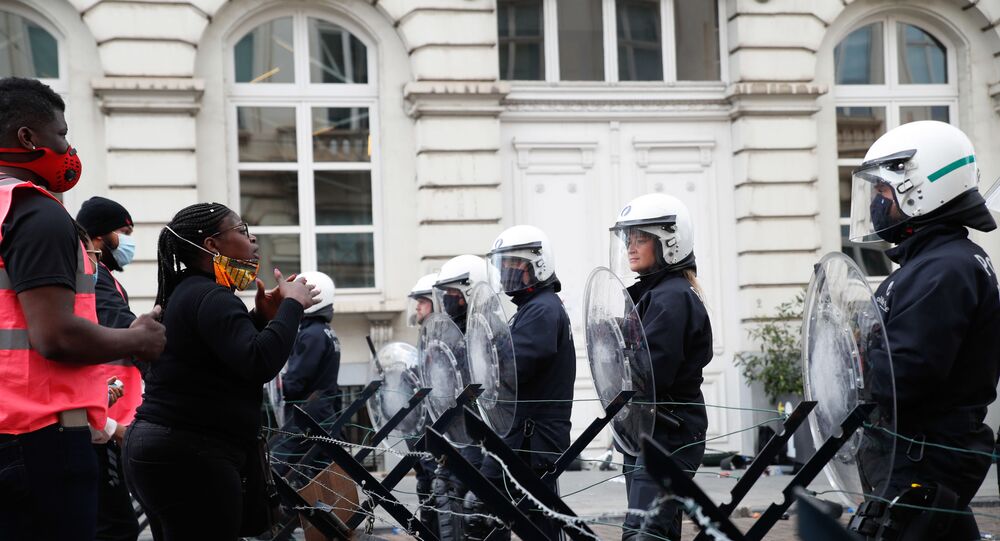 WASHINGTON (Sputnik) - The Minneapolis City Council said in a press release on Friday that it has advanced a measure to dismantle its police department and create a new security force.

On 7 June, Minneapolis City Council decided - against the objections of Mayor Jacob Frey - to defund and disband the city’s police department.

"The City Council voted today to advance a proposed ballot measure that would ask Minneapolis voters to amend the city charter to create a new Department of Community Safety and Violence Prevention and remove the Police Department as a charter department," the release said.

The Minneapolis Charter Commission and the City Council's Policy and Government Oversight Committee will discuss the measure on 8 and 9 July, respectively, the release said.

The Minneapolis Charter Commission will have 60 days to complete a review of the measure and submit recommendations to the City Council. If the measure is approved by voters in November, the changes would become effective 1 May 2021, the release added.

On 25 May, African American man George Floyd died in a hospital after being arrested by Minneapolis police. The incident sparked protests - and riots - against police brutality throughout the United States and demands for policing reforms.

Following the incident, the calls to reform the police started to gain ground. In June, Republicans and Democrats unveiled their versions of police reform bills.

The US Senate Republicans presented the Justice Act, which would strengthen police training methods and tactics, particularly those concerning issues of de-escalation of force and the duty to intervene, as well as take concrete steps to end the practice of chokeholds without banning them outright.  The measure will also require full reporting after each incident where officers discharge their weapons, use force, or enforce no-knock warrants.

"We believe it brings our law-enforcement community to a place where they have the resources necessary to deescalate some of these situations and... to hire more officers, and have more training, and have a better perspective on history", author of the bill Senator Tim Scott said.

The House Democrats' bill would ban the use of chokeholds and no-knock warrants, mandate body cameras, restrict the use of lethal force, and set up independent structures to investigate allegations of police brutality while also establishing a national database for identifying all officers recorded as having used excessive force.

The main difference between the two versions is that the Democrats' bill strips police officers of qualified immunity, thereby allowing victims of misconduct to sue them. Both bills would also make lynching a federal hate crime.

On 16 June, US President Donald Trump announced the signing of an executive order that will oversee the introduction of a police reform bill. Trump argued that instead of giving in to the demands of "radicals" to defund and dismantle the police, the US will instead be supporting the "brave men and women in blue" while resolving the current issues.

"We will prioritize federal grants from the Department of Justice to police departments [which] seek independent credentialing and certifying that they meet high standards and in fact in certain cases the highest standards [...] on the use of force and de-escalation", Trump said.

Previously, Trump rushed to Twitter to slam the Democratic vision of police reform, accusing the Democrats of trying to “defund and abandon our police”.

While most of the protests against police brutality and negligence towards those in the black community remained peaceful, some turned violent, with rioters attacking law enforcement, vandalizing and looting shops, as well as assaulting ordinary US citizens.

Minneapolis fire crews have responded to about 30 fire incidents during 27-29 May amid the protests over the death of George Floyd, a local news outlet reported. St. Paul police had to send about 40 police officers to support Minneapolis firefighters, it added.

Some local residents were enraged by arson and looting that had caused damage to their houses and places of work.

“This is not the way I would choose to protest, destroy my own backyard and my front yard and the things that we use to keep us alive: our arts and our bars and our youth centers and our police stations,” Regina Marie Williams said. “We need these resources”,  she added, as quoted by local media, commenting on the arson that took place at the Ivy Building for the Arts.