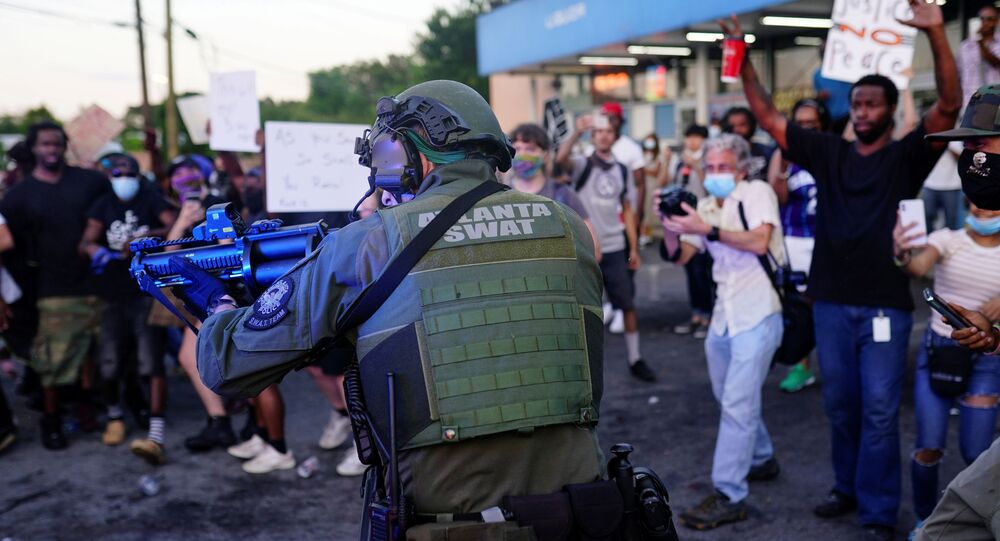 As George Floyd protests continue to rage on, another black man was killed by a white cop in Atlanta in what prosecutors suggested might have been an unnecessary shooting.

The hacker group Anonymous has claimed responsibility for taking down the website of the Atlanta Police Department in the wake of the killing of Rayshard Brooks.

Atlanta media report that the department’s website went offline for three hours on Sunday morning, local time, but was later recovered. It appears to be unavailable again, as of 1:00 a.m. on Monday.

Anonymous, who have organised cyberattacks on the police in the past, said they targeted the website in retaliation for Rayshard Brooks, a 27-year-old black man who was fatally shot on Friday during an encounter with two white Atlanta police officers, Garrett Rolfe and Devin Brosnan. The hacker group has also demanded that the two cops be arrested.

Anonymous has taken action against Atlanta PD for the execution of #RayshardBrooks, we call for the arrest of the two murderers. No more impunity. #BlackLivesMatter #AtlantaShooting #AtlantaProtests https://t.co/jpFhU7T8Ij

​Officials said that Brooks, who had fallen asleep in his vehicle in a Wendy’s drive-thru, failed a sobriety test. When the two officers, tried to arrest him, he snatched a Taser and fled while pointing the stun gun at Rolfe, who shot him twice in the back, according to investigators and police bodycam footage. An autopsy on Sunday declared Brooks’ death a homicide.

“(Brooks) did not seem to present any kind of threat to anyone, and so the fact that it would escalate to his death just seems unreasonable,” said Fulton County DA Paul Howard. “If that shot was fired for some reason other than to save that office’s life or prevent injury to him or others, then that shooting is not justified under the law.”

The district attorney’s office is expected to decide which, if any, charges will be pressed within the next few days. Rolfe was fired on Saturday and could face a felony murder charge. Devin Brosnan, who didn’t shoot, has been placed on administrative duty pending an internal investigation. Neither of them has been arrested. Atllanta’s police chief has also resigned over the incident.

Brooks’ death may add new fuel to nationwide protests against police brutality and racism triggered by the killing of George Floyd last month. Protesters on Saturday set fire to the Wendy's restaurant near which Brooks was killed.