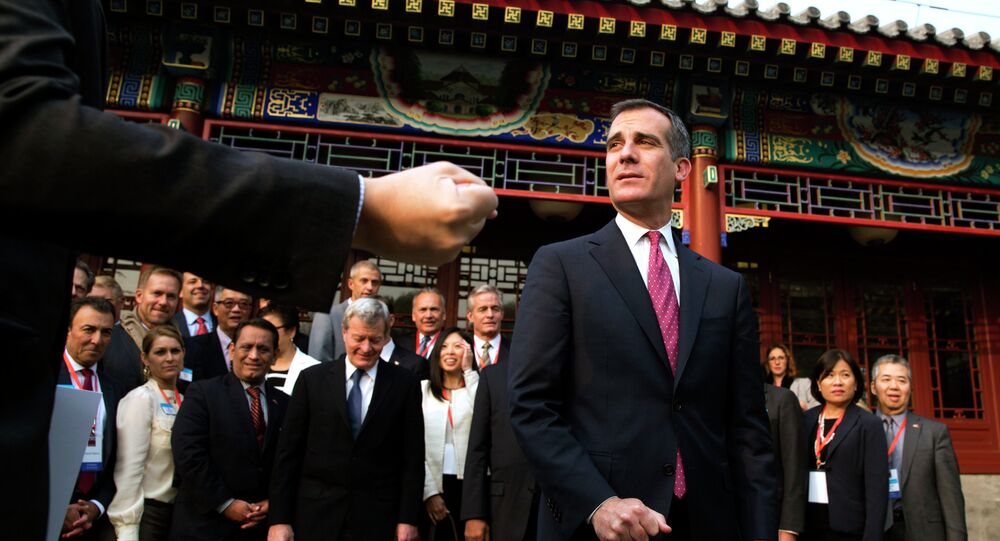 '2020 Summed Up’: Netizens React to News of Earthquake Hitting California Amid Protests Sweeping US

A 5.5-magnitude earthquake hit near Ridgecrest, California, on Wednesday evening; Los Angeles mayor Eric Garcetti acknowledged the tremor in his Wednesday evening press conference addressing the ongoing protests against police brutality sparked across the US by the death of George Floyd.

Los Angeles Mayor Eric Garcetti gave a press conference on Wednesday evening, where he addressed the protests against police brutality and racism that had swept the country in connection with the death of African-American George Floyd.

Garcetti announced an extension to the city’s curfew, while acknowledging it would be the last, unless setbacks were registered, as Tuesday night was characterised as more peaceful than previous nights. As he spoke of “reinvesting in black communities and communities of colour”, and announced $250 million in cuts to the proposed budget to reallocate the funds to presumably black communities 'of colour', “so we can invest in jobs, in education and healing”, the mayor mentioned he had been informed of a large earthquake hitting Ridgecrest, California, adding “as if things couldn’t get any worse”.

The Mayor pretty much sums it up right now in LA. #earthquake pic.twitter.com/xGgVEzzRO4

​A magnitude 5.5 earthquake had been registered near Ridgecrest, about 120 miles northeast of Los Angeles, according to the US Geological Survey; the tremor was felt across Southern California.

Netizens were quick to swoop in on the perceived sarcasm in the mayor’s statement, as they posted comments reflecting their personal reaction to the events dominating the start of 2020, such as the COVID-19 pandemic, and the protests and violence triggered by the death of George Floyd.

Lol. Earthquakes, locusts, murder hornets, corona, Trump. I mean..I got nothin’. Really, there’s just nothing else to say at this point. In a few months it’ll be Nor’Easters and that’ll be the icing on the cake.

Things can always be worse, that's wha the #bible tells us.

​Many expressed their sympathy towards the mayor.

I felt his internal sigh. Lol I did the same thing sitting on my couch! Freaking earthquakes!

Others on social media commented that the upheavals in the country would put most “disaster” movies to shame.

And then there is Yellowstone. It’s big enough that if it blows, pretty much the entire country; along with a lot of the world will be either destroyed or altered.

I hear reports of Murder Hornets inbound to LA! pic.twitter.com/BMVogx2uqD

There’s a big astroid coming at us pretty soon here…

The 5.5 tremor that shook Ridgecrest was centred approximately 10 miles south of Searles Valley in the Mojave Desert around 6:32 p.m, and was felt by people in Los Angeles County, in Orange County, and as far as San Diego. No damages were reported.
In the opinion of seismologist Dr. Lucy Jones, the quake was an aftershock of the Ridgecrest earthquake, which had a 6.4 foreshock on 4 July 2019 followed by a 7.1 mainshock one day later.

Yes, an earthquake. A M5.5 at the very southern end of the 2019 Ridgecrest aftershock zone. This is a large late aftershock - do you remember that I said these are common?

​According to Dr. Jones, even though the Ridgecrest earthquake was nearly one year ago, aftershocks this late are normal.