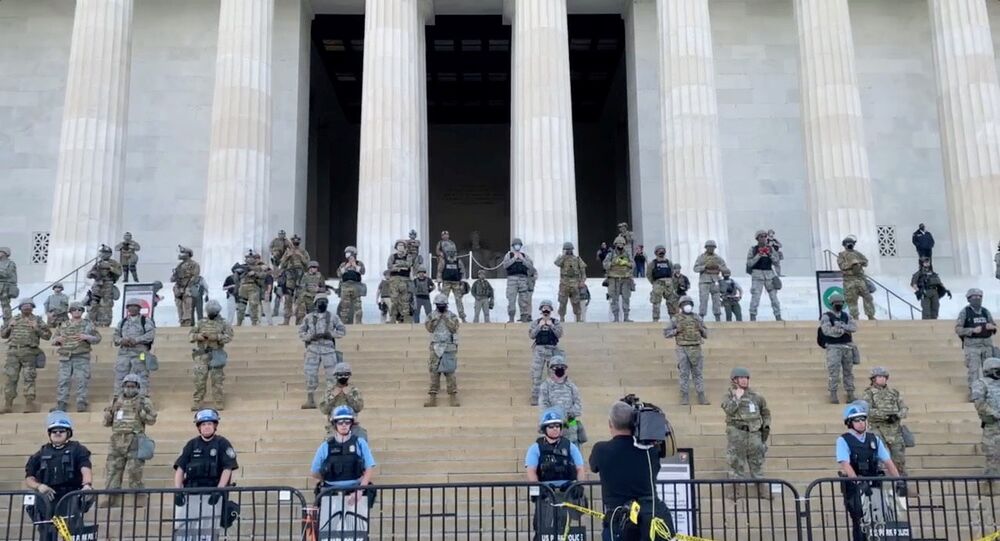 After more than a week of intense mass protests, the US capital is awash with thousands of National Guard troops and a bevy of military equipment. Spotted around the city have been spy planes and drones, tilt-rotor aircraft and even a nuclear detection helicopter. However, the mass deployment follows one of the most peaceful protest days yet.

After five days of mass protests in Washington, DC, against police brutality and the in-custody death of black Minnesota man George Floyd last week, US President Donald Trump has made an almost unprecedented show of force by deploying thousands of troops in the nation’s capital, even as more peaceful protests have come in the wake of rioting and looting.

There are NO protestors in DC this morning. These heavily armed “federal forces” assembled in formation between 515-530am when there also were no prostestors in DC. They are currently “protecting” empty streets pic.twitter.com/F6tbvYyoIs

A National Guard Swearingen RC-26B spy plane was spotted over the city Tuesday night, as was a special Bell 412 helicopter fitted out by the National Nuclear Security Agency (NNSA) for “sniffing” out the telltale radioactivity put out by nuclear weapons, suggesting defense officials feared the use of a “dirty bomb.” Unconfirmed reports of drone activity across the city appeared on social media, and on Wednesday, observers also spotted V-22 Osprey tiltrotor aircraft, used by the US Marine Corps for transporting troops.

​On Saturday and Sunday, numerous clashes between protesters and police broke out, resulting in liberal use of pepper spray and flash bang grenades and the rushing of military police to bolster DC Metropolitan Police ranks. Rioting and looting followed at night, resulting in a curfew and activation of the city’s National Guard.

However, protesters on Monday and Tuesday remained largely peaceful, with huge marches on Tuesday night violating the 7 p.m. curfew by several hours but remaining nonviolent.

Trump boasted in a Rose Garden speech at the White House on Monday, as explosions of police flash-bang grenades echoed behind him, that he was dispatching “thousands and thousands of heavily armed” to the city to suppress the rioting and protests. He then threatened to send the US military into any state that refused to activate its own National Guard, calling himself “your president of law and order.”

Trump has reportedly named the effort “Operation Themis,” after the Greek god of law and order whose blindfolded statue is also known colloquially as “lady justice.” One cannot help but be reminded of author Anatole France quipping that “the law, in its majestic equality, forbids the rich as well as the poor to sleep under bridges, to beg in the streets, and to steal bread.”

On Wednesday, there were approximately 3,600 troops in DC: 1,300 from the city’s guard and another 2,300 sent from other states’ guards, with 1,300 more troops, including active-duty soldiers from the 82nd Airborne Division, expected to arrive in the next few days, CNN reported, citing a US defense official.

According to DC Mayor Muriel Bowser, the soldiers carried pepper spray, batons and riot gear while occupying areas around the city, but not live ammunition. However, an unnamed defense official told Stars and Stripes Wednesday that a small number of troops did carry pistols and long rifles.

Two blocks north of the White House on Wednesday morning were also stationed several dozen members of Bureau of Prisons Crisis Management Teams, better known as prison riot control cops. However, the officers refused to identify their affiliation to any passers-by or to the press.

Good morning from Washington where the perimeter around the White House has been expanded - guarded by what we believe are federal prison riot control officers pic.twitter.com/rcj32IvsoR

​Since Friday, more than 400 protesters have been arrested in DC, most of them during the sweeping Monday attacks that followed Trump’s declaration and the violent clearing of protesters from Lafayette Park, resulting in the injury of a Sputnik correspondent alongside other members of the press. Nationwide, there have been more than 9,300 arrested, according to a tally by the Associated Press.

In one incident, hundreds of protesters were driven uptown by police, where residents who opened their doors to the demonstrators were raided by the police, including one home that got a tear gas canister thrown into it and another that sheltered close to 100 protesters until the curfew was lifted. In another, several National Guard helicopters hovered just 50 feet above protesters, attempting to use the “blade wash” from the rotors to demoralize them - a tactic used by US troops against insurgents in Afghanistan and Iraq, which the DC National Guard has now said it is investigating the use of.

​According to the DCist, there are 67,000 guardsmen activated across the country - roughly the same number activated to quell the nationwide uprisings that followed the April 1968 assassination of black civil rights leader Dr. Martin Luther King Jr. In DC, the riots burned much of the city, and 11,850 federal troops and 1,750 National Guard members were deployed to suppress the demonstrations.