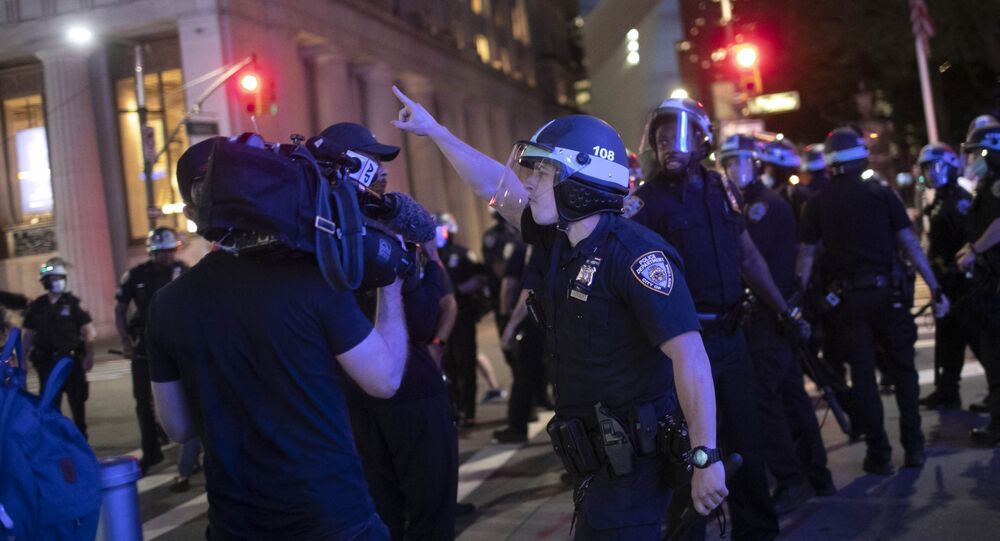 The Associated Press has issued a reprimand to the New York City Police Department (NYPD) after affiliated cops were seen verbally and physically harassing two journalists attempting to cover Tuesday night’s protests in the lower Manhattan borough of NYC.

Within the 84-second clip, videojournalist Robert Bumsted and photographer Maye-E Wong are instructed by police to return to their homes, as the 8 p.m. local time curfew had recently taken effect. Cops are seen shoving individuals already complying with orders.

“Thank you, have a good day. Go the f**k home,” an officer is overheard saying to protesters and the AP journalists. “Go home - I don’t give a f**k.”

The videojournalist initially tries to reason with the authorities, telling them that he is a member of the press and therefore an essential worker.

“Who are you essential to?” one cop repeatedly asks Bumstead rhetorically, raising his voice each time. The cops then force the journalist onto the sidewalk.

Despite the cops’ training on de-escalation tactics, a number of additional expletives are hurled toward the journalists by police. While most officers are overheard patronizing the AP news crew, one officer uses a low tone and blocks other cops from interfering with the situation.

“Sir, get in your car,” the officer orders. Bumsted then explains that other cops are preventing him from accessing his vehicle.

“I’m helping you out, sir,” the officer adds as he waits for the videojournalist to get into his car.

According to AP, the NYPD will conduct an internal investigation into the matter, because journalists are supposed to be exempt from the curfew.

Wong noted that the cops “didn’t care” that the pair were members of the press. "They were just shoving me."

"The role of journalists is to report the news on behalf of the public," AP spokeswoman Lauren Easton said in a Wednesday statement. "It is unacceptable and deeply troubling when journalists are harassed simply for doing their job."