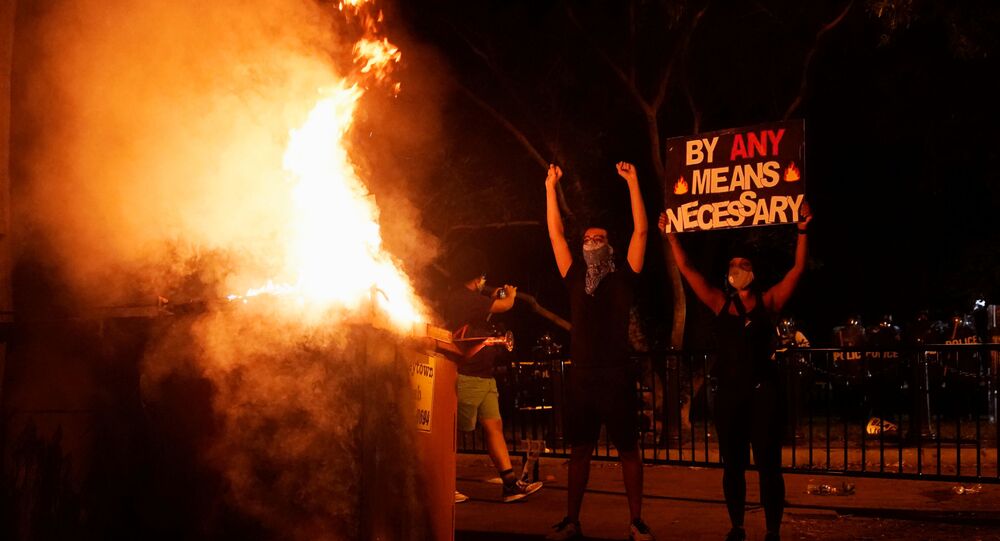 Sweeping protests over the death of George Floyd and other police killings of black men entered a fifth night across at least 30 US cities on Saturday night, as mayors and governors increasingly resorted to curfews, with some calling in the National Guard after numerous scenes of violence on Thursday and Friday.

Protests over George Floyd's death continued for a fifth night on Saturday with violence and raging fires in several cities across the United States as law enforcement has been enhanced from coast to coast; from big cities to small towns.

A compilation of videos that captures how police officers incite violence.

How are they responding to protests against police killings? With further abuses of power.

If this doesn’t tell us we need police reform, we’re not paying attention. pic.twitter.com/Y7tITwbxeB

Here is a clip of a Black Womxn activist calling for ppl to step away from the cop car that was fliped by a group of white people in Salt Lake City. They ignored her. This was not our doing. We wanted a peaceful protest, but that too was stolen from us. #BLM #saltlakecity #utah pic.twitter.com/SLURC8uSPO

As Saturday night went on sporadic violence was seen in many US states again, with stores torched, windows smashed, police cars set on fire, protesters injured and detained, as some complained about the police disproportionately getting tough with protesters and people, who just happened to be nearby:

FWPD tear gassed a three-year-old kid in Fort Wayne tonight whose parents weren’t even part of the protests. They were just walking home. The police were absolutely out of control today. Fuck every single one of those cowards. pic.twitter.com/9o3fqrhpXG

In a fresh development, authorities resorted to tear gas and even rubber bullets to disperse the demonstrators, with curfews enacted in several major cities, including Atlanta, Chicago, Louisville, Denver, Miami, and Milwaukee.

The ran someone over at the Greensboro Protest pic.twitter.com/nbWFwKuaey

The protests swept across at least 30 cities, while in Washington, D.C. protesters clashed with the Secret Service after tearing through a fence. Near Union Square in Manhattan, a police vehicle was set on fire, sending plumes of black smoke into the air, while in Los Angeles a police post was burned in a shopping mall, with nearby shops looted.

In Nashville, Tennessee, a historic courthouse was set alight and in Salt Lake City, Utah, vehicles were burned in various places.

In Chicago, Illinois, demonstrators swarmed Trump Tower, while in Philadelphia, Pennsylvania, protesters broke into a store near City Hall and set a fire inside, attempted to tear down the statue of a former mayor, and ignored an 8 p.m. curfew.

San Antonio protest march was successful because of how it was organized. Everyone understood the protocol. But then these idiot kids decided to riot TWO hours after it was over destroying downtown. Disappointing. #SanAntonioprotestpic.twitter.com/Mvhtsva7fr

In Atlanta, people torched a police car and broke windows at the CNN headquarters. In Oakland, San Jose, and Los Angeles, protesters blocked highways and police fired tear gas, while in Louisville, Kentucky, police fired projectiles at a reporter and her cameraman during a live shot, The Guardian reported.

I screen recorded this it was on the snap map, this is what’s going down in Atlanta #GeorgeFloydProtests #AtlantaRiots #AtlantaProtests #PoliceBrutality pic.twitter.com/SvzO2OerdM

In numerous other cities from Seattle to Denver on Saturday there were reports of violence, including arson, attacks on law enforcement, and vandalism.

One death was earlier registered among the protesters in Detroit on Friday, when someone shot into a crowd from a vehicle.

Minnesota Gov. Tim Walz said he was "fully" mobilising the National Guard in the Twin Cities, saying Saturday that he had requested the largest deployment of National Guard troops since the Second World War.

The National Guard has also been activated in Georgia, Kentucky, Wisconsin, Colorado, Ohio, Tennessee, and Utah. Seattle called in 200 National Guard members, who were to be unarmed.

Los Angeles established a curfew, initially resisting using the National Guard, with Mayor Eric Garcetti saying he wouldn't like to evoke memories of the 1992 Rodney King riots. "If you love the city, go home", he said. However, late on Saturday, Garcetti finally called in the Guard.

the @BLMLA protest was PEACEFUL until the cops met us at Fairfax with rubber bullets #LosAngelesProtests #LosAngeles #BLM pic.twitter.com/T5wymsU0oY

Minneapolis Police said they have been "overwhelmed", responding to hundreds of 911 calls about gunfire, property damage, and burglaries in the days following George Floyd's, an African American, death on Monday after a white police officer held his knee on the 46-year-old's neck for over eight minutes.