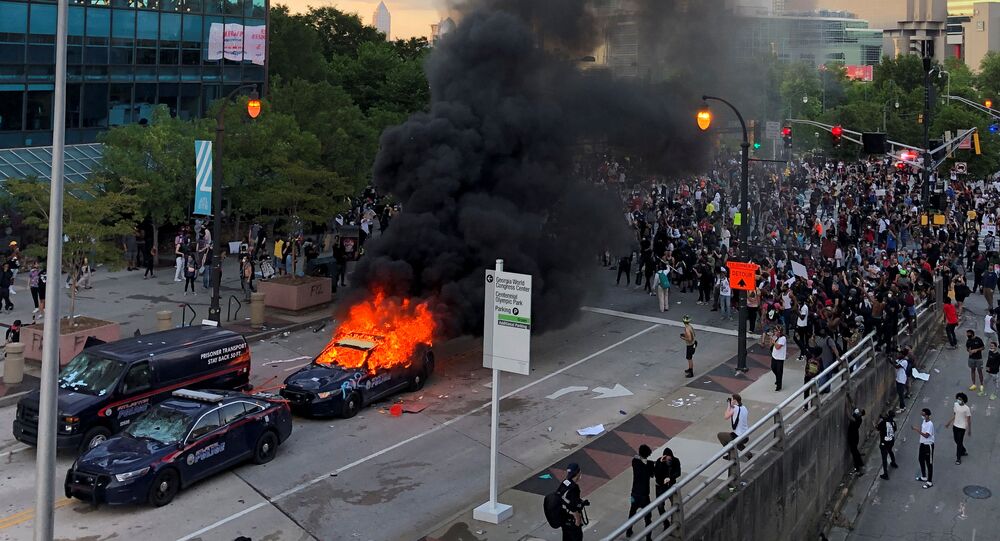 Unrest has been witnessed in several US cities, including Washington, after Minneapolis black resident George Floyd died shortly after being held in police custody.

Citizens in Atlanta took to the street outside the CNN Centre on Friday to protest against the police following the tragic death of black man George Floyd.

Demonstrations became violent at some point, including clashes with the police in riot gear, as seen on videos shared online.

Protests outside of the CNN building in Atlanta turn violent as demonstrators begin throwing objects at windows: pic.twitter.com/OcFjdappkN

Protesters were seen downtown stealing from local businesses that were vandalised amid the riot.

Breaking: Rioters have started to loot stores in Downtown Atlanta as protests against the killing of George Floyd have turned violent. pic.twitter.com/nd7htvSqNp

A police car has been set on fire in the middle of the protests.

A police car has been set on fire amid #GeorgeFloyd protests pic.twitter.com/4DxL6rK4pY

Similar protests also took place in other US cities, including Washington and Brooklyn, with the most violent of them occurring in Minneapolis, where angry citizens vandalised police property and even set buildings on fire.

According to the footage circulating on social media, Floyd was pinned to the ground by a police officer, later identified as Derek Chauvin, repeatedly telling the policeman that he cannot breathe before he becomes unresponsive. The man died at a local hospital.

Chauvin and the other three officers who were at the scene were fired shortly after the incident, while Chauvin was charged with murder and manslaughter in Floyd's death earlier on Friday.