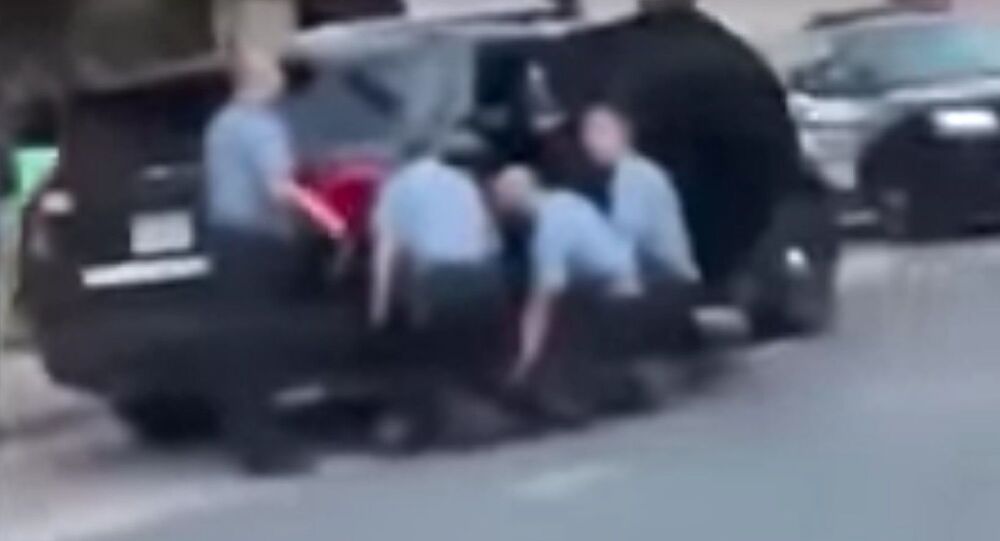 Amid the Friday arrest of Derek Chauvin, the former officer of the Minneapolis Police Department (MPD) who was filmed kneeling on the neck of Minnesota resident George Floyd, new footage has emerged showing several officers doing the same on Floyd’s upper and lower body.

Unlike the previous recordings published on social media by individuals who were present at the scene, the new footage shows the events that unfolded from an angle behind the police-marked SUV next to which Floyd was pinned to the ground.

The video, which begins as the filmer is walking towards the scene, appears to show a total of three officers kneeling on Floyd, as he pleads with them to loosen their hold on him. “Please, please, let me stand,” he’s heard saying.

Warning: Footage may not be appropriate for all viewers.

The footage was played live during the Thursday night broadcast of MSNBC’s “The Rachel Maddow Show.” Minnesota Attorney General Keith Ellison was appearing as a guest on the show when the footage was aired.

“But as I see that video, it looks like he is in a helpless position, handcuffed and without any ability to move. And he’s pleading with the officers to bring some relief to him, now that he’s clearly within their custody. So that’s what I see in that video,” he added.

The initial footage of the fatal arrest placed much of the focus on Derek Chauvin, the since-fired MPD officer who knelt on Floyd’s neck for several minutes, even after Floyd repeatedly said he couldn’t breathe and later when he fell silent. The first recording did not capture the additional officers behind the SUV.

However, the new cellphone recording wasn’t the only footage to be released Thursday. In fact, the Minneapolis Park Police Department decided to release its own body camera video from one of its officers after questions were raised about the presence of a Park Police car at the scene.

It’s worth noting that the video is heavily redacted, showing only the Park Police officer staying in the area where Floyd’s black Mercedes SUV was parked. The official is also seen monitoring individuals who were near the vehicle.

Citing a department statement, local news station ABC 13 reported that the footage was released to “demonstrate the vantage point of the Park Police officer” and to note that the law enforcement official was “not in a location to witness or intervene in the MPD incident.”

Park Police Chief Jason Ohotto has indicated that the department initially received a request for back-up at the arrest scene at approximately 8:10 p.m. local time on Monday, roughly 10 minutes after the first officers from the Minneapolis Police Department arrived.

Days after all four MPD officers were fired for their handling of the arrest, and as protests raged on in the North Star State over Floyd’s death, Chauvin was taken into custody by the Minnesota Bureau of Criminal Apprehension.

Chauvin has been charged with third-degree murder and second-degree manslaughter. Mike Freeman, the district attorney of Hennepin County, told reporters during a briefing after the arrest that additional charges could follow as the investigation continues.

At present, it’s unclear what charges, if any, may be issued against the three additional officers who were dismissed from their posts: Thomas Lane, Tou Thao and J. Alexander Kueng.

The development came moments after Ellison and Minnesota Gov. Tim Walz held a news conference in which they both stressed that the case must be carried out fairly.

Minnesota Department of Public Safety Commissioner John Harrington, who was also present at the conference, stated that the Floyd’s death was a “murder.” He went on to stress that “that’s what it looked like to me. … I’ll call it as I see it.”